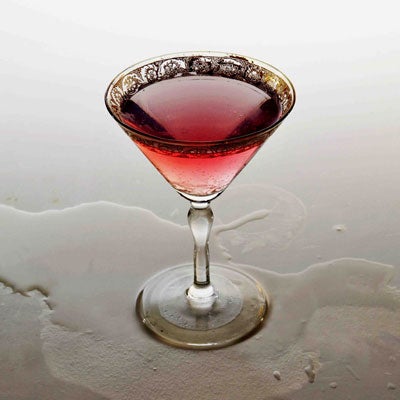 To kick its flavor up a notch, this rosy pink cocktail calls for craft-distilled, Plantation vodka. Get the recipe for Hibiscus Rose Vesper ». Todd Coleman
SHARE

I’ve never been a vodka drinker. Distilled multiple times and typically filtered, the colorless spirit is also fairly odorless and tasteless. So when saveur.com asked me to do a tasting of new American vodkas, I wasn’t expecting a thrill. I should have known better; inspired by local food movements, craft distilling is exploding in the U.S. Along with American whiskeys and other spirits, distillers are creating all sorts of artisanal vodkas. At Manhattan’s French Culinary Institute, where I run the beverage program, we sampled about 30 vodkas. I was struck by their diversity. There were vodkas made with grapes, blue corn, maple sap—local ingredients that spoke of where they’d been distilled. Then I was floored by the flavors: creamy, citrusy, spicy. I started mixing. I blended cider and celery bitters with a vodka from Oregon’s Organic Nation to make a celery cider cocktail; I added buttery Vermont Gold Vodka to a Kahlua and cream; and I used a clean, peppery vodka from Georgia’s 13th Colony Distillers in this riff on one of James Bond’s favorite drinks.

See tasting notes for 13 of our favorite craft American vodkas »

See 4 recipes for cocktails made with craft American vodkas »