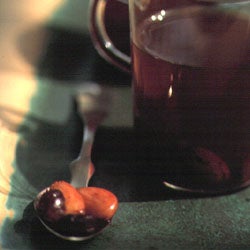 This lighter (but still deceptively powerful) version of traditional Swedish mulled wine is made with brandy and whiskey, then steeped with spices, almonds and raisins. See the recipe for Magnus Dahl's Glogg ». Christopher Hirsheimer
SHARE

My late father, Magnus G. Dahl, left Sweden in 1914. After arriving at Ellis Island, he moved to Hartford, Connecticut, and busied himself with such activities as electrical engineering and playing the clarinet. He met my mother, Verna, at church. She was also of Swedish extraction.

Despite their double dose of Viking blood, my parents lived a quiet, suburban life, rarely terrorizing anyone. The exception was their infamous Christmas glogg (pronounced “gluhg”) party, at which they served a hot, spiced wine punch strong enough to curl the horns on your helmet.

Most glogg recipes call for port or red wine, spiked with a little brandy or aquavit, then heated slowly with almonds, raisins, cinnamon, cardamom, and dried orange peels. This was too faint-hearted for my father, who was still railing against Prohibition 30 years after Repeal. Hence, the Magnus G. Dahl glogg recipe called for two quarts of tawny port, not spiked with spirits but walloped with one quart each of brandy and rye whiskey.

When their guests assembled, my mother would carry the glogg pot into the living room and hold a match to the fumes. Clearly, this was an act of Viking courage. Behind the inferno, my tall, handsome mother always appeared remarkably calm—like Brynhild (the Norse equivalent of Wagner’s Brunhilde), I thought, peering out from her ring of fire. After Mother squelched the blaze with a saucepan lid, she’d ladle the steaming punch into dainty blue-and-white Royal Copenhagen teacups, with demitasse spoons for the almonds and raisins.

The key to enjoying glogg—Dahl glogg, anyway—is getting past the first sip. It is not a subtle experience. First-time glogg drinkers tend to raise their eyes in shock as their noses collide with the blast of alcoholic fumes rising from the cup. By the second sip, though, the brew’s spicy warmth begins to charm, and to anesthetize. “Say, this is quite good,” remarks the hapless guest, wondering why he feels the urge to sing.