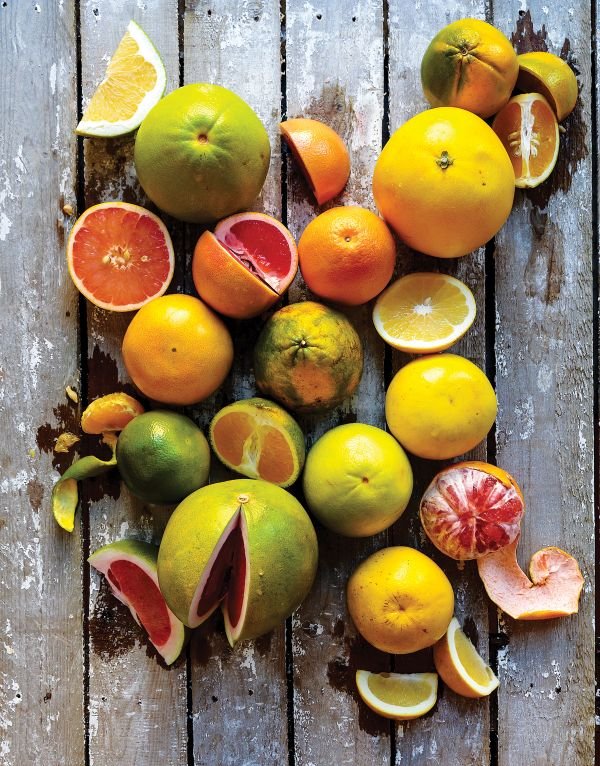 Grapefruit, a relatively new fruit discovered in the 17th century, is the natural hybrid of a sweet orange and the largest citrus, pomelo, whose thick rind is bitter but whose flesh, whether white 1 or red 2, is less acidic than that of grapefruit. In the early 1800s, the first U.S. grapefruit, lemony Duncans 3, were white-fleshed and packed full of seeds. Though they are still grown for juice, they were quickly eclipsed by the seedless Marsh 4, the product of a chance mutation botanists call a "sport." These days it's all about color: Ruby Red 5, Henderson 6, Flame 7, and Texas's laboratory-born Rio Star 8 get their striking vermilion brilliance from lycopene, the same pigment (and antioxidant) found in tomatoes. These fruits have roughly the same ratio of sugar to citric acid (3:1) as white varieties. Though some eaters swear they taste sweeter, in actuality, it's ripeness, not color, that drives sugar production. A few grapefruit hybrids are much sweeter, including California's pomelo-grapefruit offspring Oroblanco 9 and Melogold 10, and their orange Israeli cousin, the Jaffa Sweetie 11. Wrinkled, puffy Ugli fruit 12, first discovered in Jamaica, has a floral grapefruit aroma and the sugary taste of its other parent, the tangerine. The mellow Cocktail grapefruit 13 is the child of a Frua mandarin orange and the Siamese Sweet pomelo, two citrus fruits noteworthy for their pronounced lack of acid.