The 9 Chile Crisps—Yes, 9—Our Culture Editor Always Stocks in Her Pantry

From a CBD-infused option to a Chinese classic that’s gone global. 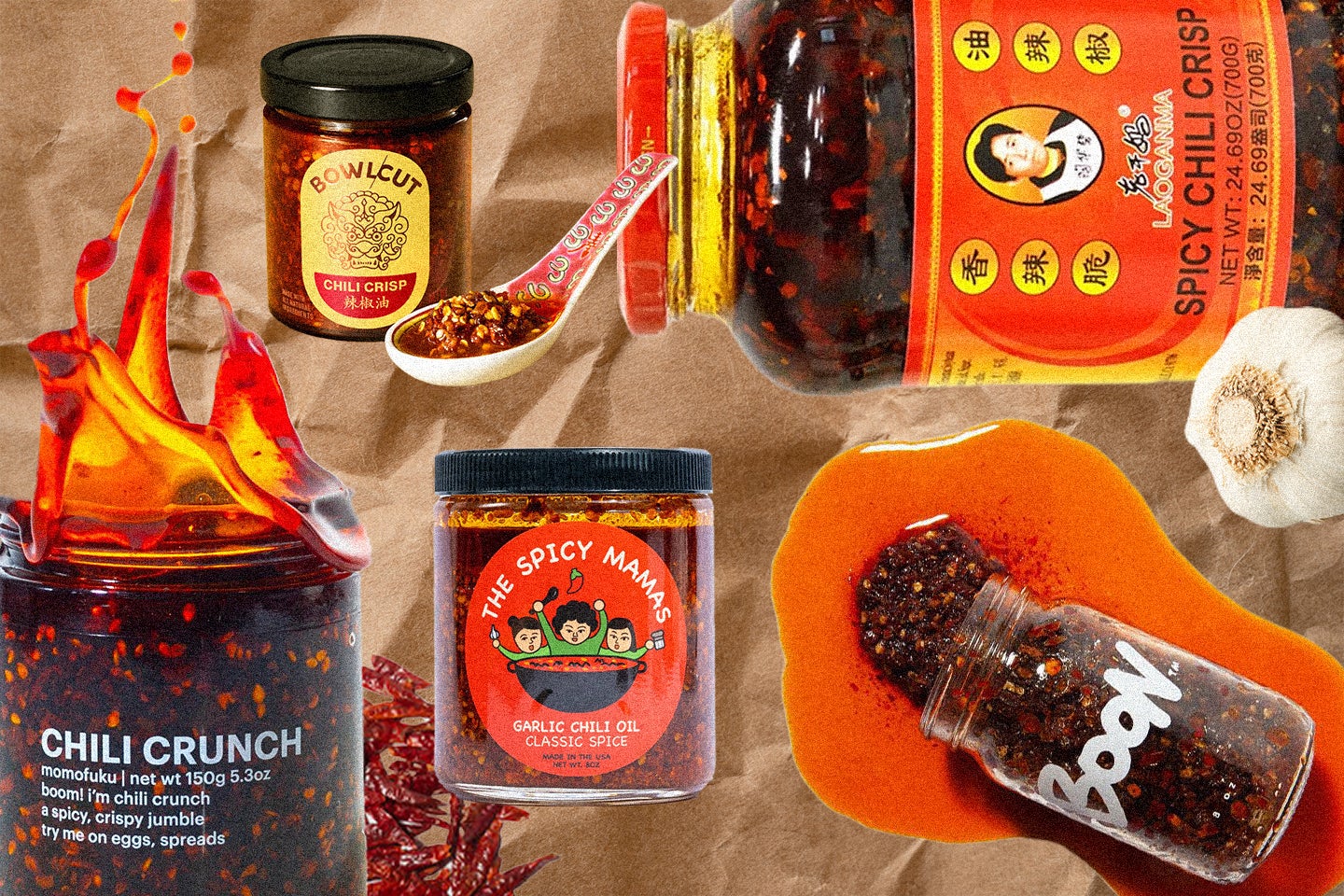 A spoonful of aromatic chile flakes floating in spice-infused oil is the easiest way I know to take any dish to complex new heights. I go through so many jars of chile crisp it may as well be another food group. That’s why the condiment has been a staple ingredient in Chinese kitchens for centuries—and why Americans are now increasingly catching on to its magic. The crunchy, savory, moderately spicy sauce is the ultimate cooking shortcut for elevating stir fries, dressing raw vegetables, and seasoning meats. (I keep my pantry stocked with several brands—see my cheat sheet below.)

“It adds a special fragrance to a dish without undermining other flavors,” says Wei Guo, the food blogger behind Red House Spice. When she was growing up in Northwest China’s Gansu Province, chile oil was a kitchen counter mainstay, as essential and ubiquitous as soy sauce or rice vinegar. Like many Chinese cooks, her family would make the condiment from scratch, toasting an assortment of seasonings such as star anise and bay leaves in oil before pouring the fragrant concoction over chile flakes. She was initially surprised to see the homely sauce take off in the U.S. during the pandemic, but the timing made sense: as people holed up indoors and tried to quickly ramp up their culinary skills (and avoid the monotony of quarantine), the ingredient’s ability to maximize flavor in practically every dish could make any home cook seem like a pro.

“Once people got a taste of what chile crisp could do for their homemade meals, they couldn’t stop,” says Elaine Luo, a Chongqing-based recipe developer who writes the blog China Sichuan Food. “All the seasonings you need are already right there in the jar. It’s convenient and makes cooking faster.” Lao Gan Ma, a ubiquitous chile sauce brand in China, has sprung from America’s Asian supermarkets into national grocery chains in recent years. The surge of interest helped catapult the spicy sauce company Fly By Jing into a household name that’s lining shelves at Whole Foods and Costco. (Earlier this year, a Los Angeles shop even used the brand’s sauce to develop a new ice cream flavor.) Other entrepreneurs, including chef David Chang and the husband-wife duo behind Big Spoon Sauce Co., were inspired by Lao Gan Ma and similar chile crisps and began selling their own peppery concoctions online to quarantined consumers.

Chile peppers have been around in China for centuries, ever since European ships brought peppers from the Americas to trading hubs in Asia, according to historian Brian Dott’s The Chile Pepper in China: A Cultural Biography. Poorer regions that couldn’t readily access salt began using chiles to season food. Cooks especially embraced the ingredient in regions like southwest China’s Sichuan Province, where the plant’s sweat-inducing (and thus dampness-dispelling) properties came in handy for combating humidity.

Around the 1990s, as the economy opened up in the country, migrant workers from Western China began moving to coastal cities in search of work—and bringing their essential condiment with them. “It has a long shelf life because of the high oil content,” explains Luo. “Gradually, people in other parts of China got a taste and realized how delicious it was.” Many migrants also opened restaurants serving the regional flavors of their hometowns, introducing diners to the country’s culinary diversity and propelling chile-infused dishes into national awareness. Later, when waves of university students left the country to study abroad, “the heaviest things in their suitcases were jars of chile sauce,” adds Luo.

In popularizing fiery condiments throughout the country, Lao Gan Ma “played a very important role,” says Guo. By bottling the concoction and marketing it effectively (the brand’s name translates as “Old Godmother” and features Tao’s grandmotherly face on every jar), the company made the product a pantry staple in all reaches of China, not just the areas that historically consumed the crunchy condiment. And the fact that the entrepreneur’s self-made story resonated with customers didn’t hurt. “She’s a woman entrepreneur. She’s from a part of China that’s not very prosperous,” says Miranda Brown, who teaches Chinese cultural history at the University of Michigan. “It’s sort of a rags-to-riches story that I think makes people feel good.”

In recent years, the Lao Gan Ma fervor has spread rapidly on social media (here’s John Cena proclaiming in Mandarin his adoration for the condiment), heating up the culinary scene in and outside China more than ever. In 2018, vanilla ice cream topped with chile oil became a hit in the spice-loving cities of Chongqing and Chengdu (McDonald’s capitalized on the buzz a few years later by releasing its own limited-edition sundae). In a collaboration for New York Fashion Week, e-commerce giant Alibaba even released hoodies emblazoned with Tao’s likeness.

Guo and Brown both liken the booming success of chile crisp to the interest that other spicy ingredients like gochujang, sambal, and sriracha have garnered and continue to generate in the U.S. With that popularity, though, comes a need to understand the diversity of chile crisp and where different iterations come from, Guo notes. “People tend to use the word Sichuan to cover everything spicy from China,” says Guo, but the world of Chinese chile oil is as wide-ranging as the country’s regional cuisines. She explains that in Shaanxi and Gansu Provinces, chile oil frequently includes Chinese black rice vinegar, while in Guizhou Province, cooks often add douchi, or fermented black soybeans. Around the country, the infinitely adaptable dish can feature everything from sesame seeds to roasted peanuts to dried shallots, all of which offer added crunch and savoriness.

Thankfully, chile crisps on the U.S. market today increasingly reflect that diversity—with innovative non-traditional add-ins to boot. These are some of the red-hot condiments I’m spooning over my meals, both sweet and savory.

This wouldn’t be a proper list without a nod to the OG, which originated in Guizhou. It isn’t the only Chinese brand, nor is it necessarily the very best, but it is tasty and has opened the door for eaters around the world to dip into the chile crisp phenomenon. In China, even households that prefer to make their own from scratch often keep a bottle around for spice emergencies.

Since launching in 2018, this former Kickstarter brand helmed by Sichuan native Jing Gao has become a massive success. The company’s signature crisp, which is made in Chengdu, features chiles sourced from Gao’s hometown and tongue-tingling Sichuan peppercorn.

When Calvin Eng, chef of the Brooklyn restaurant Bonnie’s, and his friend Ben Gabriel were developing a spicy sauce, the duo decided to incorporate a special addition: hemp-infused extra-virgin olive oil. Fermented black soybeans and an assortment of chiles deliver exceptionally earthy flavor, revving up the taste buds while also chilling you out.

This especially crunchy iteration of chile crisp, developed in 2020 by chef David Chang’s team at Momofuku Culinary Lab, draws inspiration from Lao Gan Ma and features three varieties of Mexican chiles. The ratio of oil to crunchy bits is just right, ensuring you’ll get both crisp and drizzle in every spoonful.

Anyone who wants to intensify the heat will enjoy this garlicky creation in which funky fish sauce and umami-filled mushroom powder introduce new dimensions of flavor. The product comes in Classic Spice and Killer Spice, and there’s also a vegan option.

Chef Max Boonthanakit loves Lao Gan Ma but wished for even more heat, so he decided to make his own. Incorporating elements of his Thai heritage, his rendition of chile crisp is especially savory thanks to the inclusion of anchovies, making the sauce a particularly nice choice for cooking stews and stir fries.

This sauce that launched in October 2021 brings crunch, sweetness, and smokiness to the table with ingredients like pepitas, brown sugar, and shallots. The brand, which produces its olive oil-based sauces in small batches in California, regularly pops up at farmers markets throughout the Golden State.

Created by a husband-wife team in Sacramento, California, this vegan-friendly condiment has a shorter ingredient list than most of the sauces in this round-up, but what does make it inside the jar (like leeks and sesame seeds) packs a savory punch.

Newly launched in May 2022, this sauce brand comes from a trio of co-founders who were raised by Chinese immigrant restaurant owners—and who, yes, all once sported bowlcuts. Not the spiciest of the bunch, Bowlcut’s crisp delivers well-rounded flavor from three kinds of chiles, as well as tamari sauce and seaweed powder. (Customers who do want more heat can opt for the brand’s Spicy Chili Crisp instead.)