Break out the chenin blanc, cremant, and more bivalve-friendly sips. 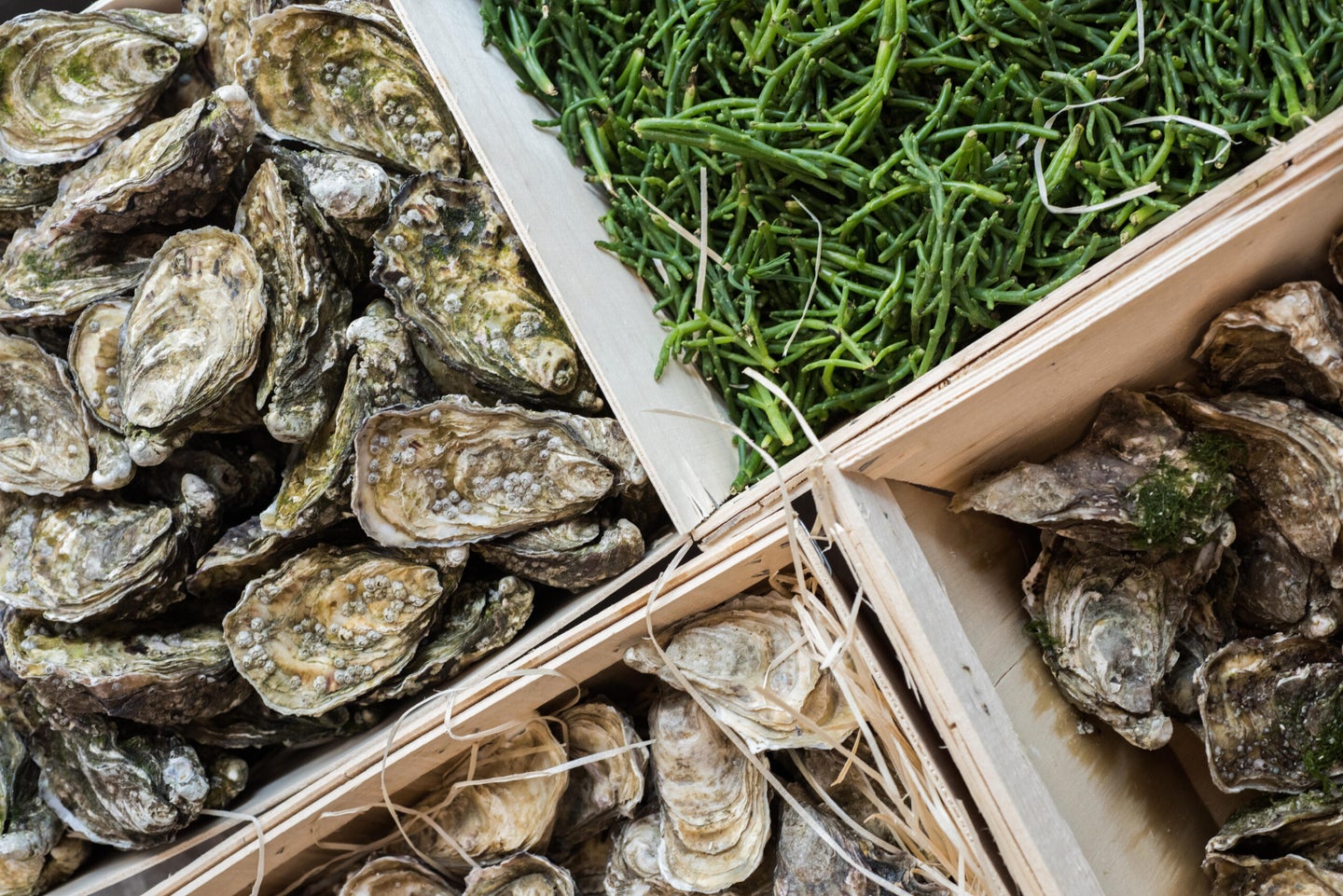 On a chilly, sunny January morning, I arrive at Oyster Club, a relaxed restaurant in Paris’ Marais neighborhood, just a short walk from the Seine. The city is still waking up and inside the restaurant, the only sounds are the purr and rattle of the espresso machine. Sunlight streams in through the large, street-facing windows and spills over the wooden bar. The decor is rustic-nautical, with reclaimed wooden tables and porthole mirrors adorning the walls. Mollusks from Brittany and Normandy are the house specialty.

It’s a shade before 10 in the morning when Adèle Grunberger and Tanguy Thomassin, the young proprietors, offer me a huître. Thomassin speedily shucks then hands me a single shivering oyster. “You have to eat the adductor muscle,” he says. “A lot of people leave that behind.” I do as told and my mouth salivates instantly, flooded with the taste of the sea. If only it weren’t too early for a sip of cold wine to go with. As it happens, that’s what we’re there to chat about: the best wines to pair with raw, briny oysters.

According to an age-old rule of thumb, oyster season runs from September through April, also called the “R months.” Abstaining from oysters during the summer months is partly a reproduction issue; the annual spawning period renders oysters “laiteuse,” or filled with a milky liquid, giving them a creamier mouth feel that most people—around 80 percent of consumers, according to some counts—don’t like. (Though I should note, some, including my mother-in-law, relish their oysters laiteuse.) It was also a refrigeration issue. According to Thomassin, coastal locations aside, oysters had to be transported long distances by horse-and-carriage, sans cooler. You can imagine why it became commonplace to avoid such a fine delicacy during the dog days of summer.

These days, you can find good oysters year-round. “The peak reproduction period usually lasts less than a month,” says Thomassin, and to adjust for that window of time, Oyster Club sources from multiple producers to avoid serving laiteuse varieties.

When considering the oyster, certain flavor profiles come to mind: briny, creamy, metallic. On their own, the species may or may not be an aphrodisiac, but washed down with the perfect wine, it’s hard to argue with the fact that they make you feel a certain way. The classic French pairing, according to Grunberger and Thomassin, is Muscadet from the Loire Valley. Made from the Melon de Bourgogne grape, Muscadet has high acidity, a touch of salinity—which plays particularly well off the oyster’s brininess—and characteristic mineral notes. “Our clients love minerality with oysters,” Grunberger tells me.

Wines made with the chenin blanc grape, which also has high acidity, are never a bad idea. One of Grunberger and Thomassin’s favorites include a Savennières from Domaine des Forges. The dry white from the Loire River’s north bank is cultivated on schist soils covered with aeolian sands, which impart a deep, oyster-friendly minerality. Thomassin hands me a bottle of an organic chenin blanc from a family-run vineyard in Chinon, Domaine de la Marinière; when I taste it later, it’s tannic and dynamic, with bright acidity that calls out for shellfish.

Another characteristic Thomassin suggests consumers keep in mind is alcohol level. “We try to serve light wines because the oyster is so subtle,” he says. “Too much alcohol will dominate the flavor and leave no room for the oyster.”

Oyster Club also recommends dry Champagne or any similar sparkling wines. Cremant from the Jura or Loire Valley, for example, complements oysters’ salty-sweet “noisette” flavor. When I suggest that the increasingly trendy pét-nat might hold its own, both Grunberger and Thomassin agree, especially if you’re after a wine with a gentler effervescence, as natural fermentation tends to produce softer bubbles. Grunberger further suggests that an edgy orange wine—with pithy citrus notes and a tinge of bitterness—can also provide an interesting counterbalance to the oyster’s brininess. One of her favorites is Orange Is The New White, a skin-contact pét-nat from André Kleinknecht in Alsace.

Winemakers, of course, have their own strategies for pairing with oysters. According to Marianne Fabre-Lanvin, co-founder of Souleil, a new organic wine company from southern France, terroir can also be your guide. Like long-lost siblings, wine and oysters produced in the same region have an undeniable correspondence.

“For our white wine, we use a grape called piquepoul,” Fabre-Lanvin tells me. “It’s indigenous to a specific area in the South of France and has a rare salinity because the soil gets a lot of salted water from a nearby lagoon and the Mediterranean. Enjoyed together, both the wine and oysters are especially refreshing.”

That said, while terroir can be a guide, Fabre-Lanvin doesn’t feel it should be a limitation. “I had oysters with a friend in New York the other night,” she says. “We paired Long Island oysters with Souleil’s white and it was perfect.”

An oyster aficionado raised in the South of France, you might say Fabre-Lanvin and her business partner, Thomas Delaude, developed their white wine with a plate of raw oysters in mind—I can attest, the combination makes for a sublime apéro. In fact, the pair are so passionate about aquatic creatures that Souleil directly supports nonprofits that protect them. Said Marianne, “Thomas and I grew up next to the Mediterranean, so we launched our company to help shine a light on nonprofits that focus on ocean preservation. Our team participates in their clean-up events, and we rally our friends to make a greater impact.”

Made largely with grenache, Souleil’s rosé also makes a fine match for oysters. “It’s an indulgent pairing, especially in warmer months,” Fabre-Lanvin explains. “They’re both lush and gourmand.” Dry rosé often goes well with oysters, she adds, so long as it’s well-chilled, so that the fruit notes do not overpower the seafood. “But it shouldn’t be too cold either,” she warns. 50 to 55 degrees Fahrenheit is a good target.

Inspired by these conversations, I later decide to travel to Cancale, a small town in Brittany known for its oyster market. Oyster Club sources some of their oysters here, as did Louis XIV—rumor has it he had the town’s fresh mollusks delivered to Versailles daily. The market is perched alongside the Mont Saint-Michel bay, overlooking rows of oyster beds. Seagulls swoop for emptied shells discarded like shrapnel beside the plankton-filled water.

Together with my husband, Guillaume, and my daughter, Mimi, we peruse the handful of blue-and-white-striped stalls, each offering a selection of oysters for as little as five euros a dozen. We choose a vendor—a woman wearing the local uniform of puffer jacket and rubber wellies—then idle while she shucks as effortlessly as one might butter a toasted bagel. Nearby, a few people stand in line by a wine truck selling cold bottles of Muscadet and Sancerre, the din of the market occasionally punctuated by the pop of another bottle being uncorked.

With our plate of oysters, adorned by a single halved lemon, we sit on the stone steps between the market and the bay. I pass Guillaume the chilly cremant stashed in my tote bag. He gives it some muscle, and pop, our drinks are ready. Mimi stomps on piles of empty shells, evidence of many a satisfied customer, as Guillaume and I toss back the briny, faintly nutty oysters—adductor muscle and all—and sip the bright and minerally sparkling wine. It’s as fine a pairing as nature could have created. We polish off a dozen in minutes, along with our wine, and a hazy contentment settles over me.