A Field Guide to Vermouth

Get to know the diverse styles and flavors of vermouth, an herbaceous fortified wine essential in cocktails like the martini, Manhattan, and Negroni 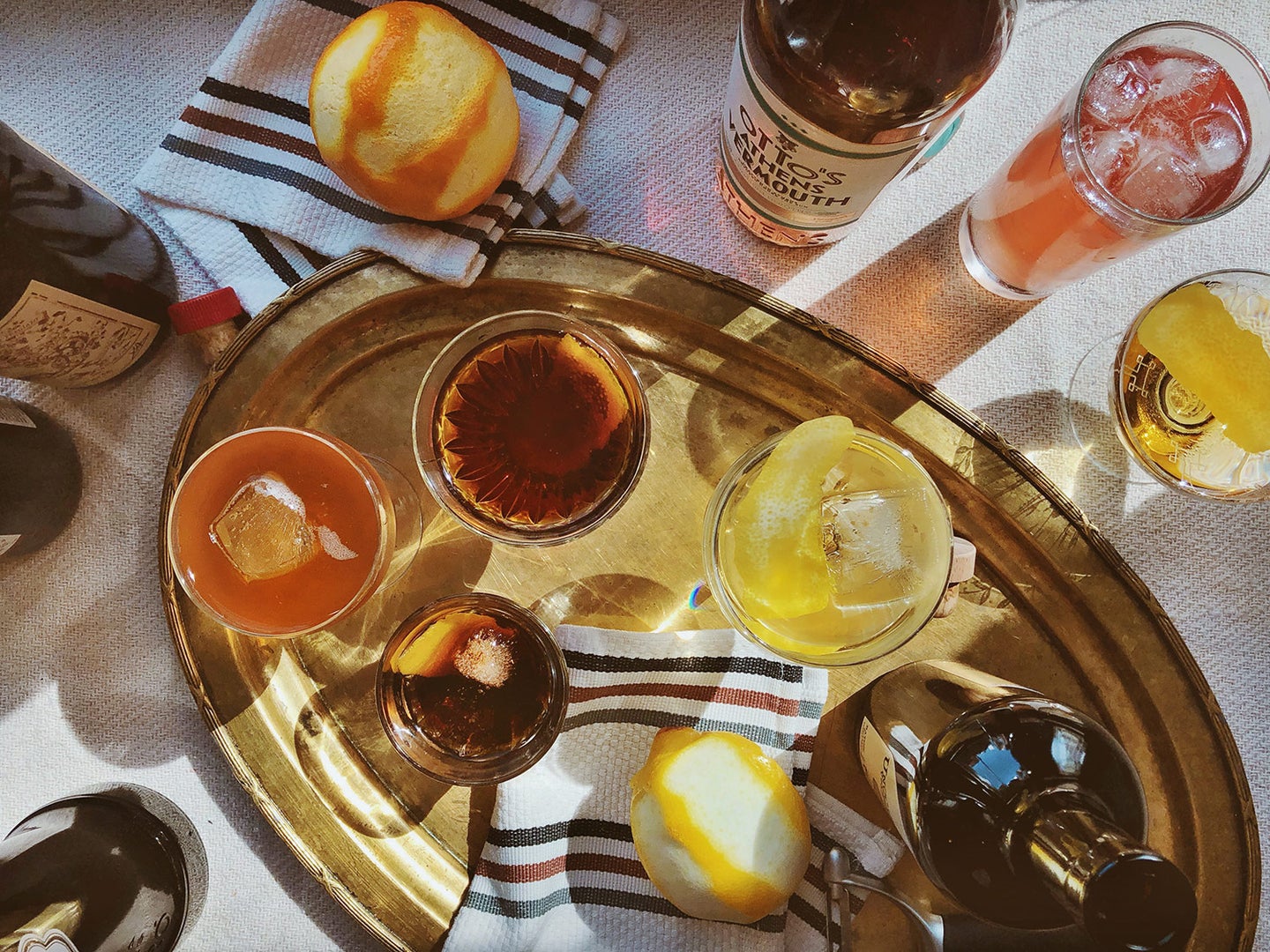 “Vermouth is the union of two cultures: the herbalist culture and the oenological culture,” says Fulvio Piccinino, Italy’s foremost vermouth expert and author of Il Vermouth di Torino. As he explains it, vermouth—much like Italian amaro—has its origins in the medicinal elixirs made by Italian pharmacists and monks in the medieval era. Antonio Benedetto Carpano is widely credited as the first person to record his vermouth recipe in 1786, making him the inventor of what we now know as vermouth. His recipe had all the elements of a modern vermouth: a wine base, wormwood as a bittering agent, botanicals for flavor, and sugar to sweeten it.

Nowadays vermouth is most commonly found as an element in cocktails, but in 19th-century Italy, France, and Spain, it was drunk on its own or perhaps with a splash of soda and a lemon or orange peel as an aperitif. It was favored by the royal court of the Savoys and spread from northwest Italy to southern France, and eventually to the rest of the world. Though Italy and France have largely lost their culture of drinking vermouth as an aperitif, it’s made a comeback in Spain, where it’s commonly served neat or over ice, sometimes garnished with an olive or a lemon or orange peel.

“In Italy we lost the culture of vermouth in the ‘80s because we started to drink the American way,” Piccinino says, explaining that vermouth is still widely used in cocktails, but few Italians drink it on its own. He believes, however, that vermouth is ripe for a comeback.

There are three essential styles of vermouth to know. Sweet (red) vermouth is the most common—it’s what’s called for in Manhattans, Negronis, and many other cocktails. Dry vermouth is clear in color and is used in martinis. Bianco vermouth is also clear or slightly golden in color and is sweeter than dry vermouth. Though you might think sweet vermouth uses red grapes, all three styles of vermouth typically use neutral white grapes, such as trebbiano. Red vermouth gets its color from caramelized sugar. In Europe, vermouth production is highly regulated, and while there’s no hard and fast rule about which grapes can be used to make it, at least 75% by volume must be wine.

Ready to delve into the wide world of vermouth? Here’s a by-no-means-exhaustive guide to some of the most popular vermouths you should try.

This is the father of all vermouths, and it’s what Teague would pour for someone who had never drank the stuff on its own before. It’s lush, fruity, and easy to sip over ice with an orange peel. There are notes of cocoa and vanilla, which give it a rich flavor. It was once favored by the Royal Palace in Turin, so you know it must be good.

“Dry vermouths to me drink, frankly, more like wine. They’re crisp and slightly herbal. This is one of my favorites,” Teague says about Dolin Dry. It tastes almost as dry as some wines. Dolin Rouge, their red vermouth, is also more delicate, with a thinner mouthfeel, than most sweet vermouths. Teague uses it as his go-to vermouth when making a Manhattan, while his ideal Martini is made with 50% Dolin Dry and 50% gin. The brand was founded in 1821 in Chambéry, France.

Two of the biggest vermouth producers are Martini & Rossi and Cinzano, both of which hail from Turin and dominate the global world of wine and spirits. Though their standard vermouths are ubiquitous, it’s worth seeking out their premium lines. In Martini & Rossi’s case, that would be the Riserva Speciale, which comes in Rubino (sweet) and Ambrato (bianco) styles. In 2014, Cinzano released a special-edition line of vermouths—Rosso and later a Bianco, and Extra Dry—named “1757” to pay homage to the vermouth’s original creators, Giovanni Giacomo and Carlo Stefano, who created Casa Cinzano in that year. In 2019, the brand launched 1757 Vermouth di Torino G.I. from Casa Cinzano nationwide. These small-batch bottles are juicier and more lush than their standard vermouths, since they’re crafted using the traditional method and have added botanicals.

Rich and dark, Cocchi Storico Vermouth di Torino has cacao notes in addition to spicy botanicals like ginger, citrus, and rhubarb, which makes it a nice after-dinner digestif. Unlike some other popular vermouths, Cocchi still uses moscato wine from Piedmont as its base, which gives it a more floral aroma and flavor. Produced since 1891, it’s one of only two vermouths with protected geographical indications of origin.

Greece doesn’t have a vermouth tradition like Italy, France, and Spain, but Otto’s Athens Vermouth is one Greek brand worth trying. The caramel color makes it appear to be somewhere in between a sweet red vermouth and a dry vermouth, and that’s how it tastes, too. Made with Greek wine, it’s infused with rose petals, wormwood, citrus, olive leaves, and Greek herbs like oregano and angelica. It’s especially refreshing over ice topped with soda or tonic.

Compared to Italian vermouths, Spanish vermouths tend to be lighter and less bitter, as well as taste sweeter, though they actually contain less sugar. According to Teague, the difference is likely an effect of the type of grape and the length of fermentation. “The shorter the fermentation, the more residual sugars remain,” he explains. The city of Reus in Catalonia has been home to Spain’s biggest vermouth producers for over a century. The family-run Miró house makes an easy-sipping sweet vermouth with aromatic herbs like oregano and notes of anise. It’s much drier and savorier than its Italian counterparts.

One of the newest vermouth brands on the market, Uncouth Vermouth is made in small batches by Bianca Miraglia, who has a farm in upstate New York. She produces small-batch vermouths using high-quality wine (mostly from Red Hook Winery), mugwort (which grows in New York, whereas wormwood doesn’t), and herbs foraged from around her farm. She has made batches of vermouth with butternut squash, apple mint, beets, and rhubarb.

Popular in the late 1800s and early 1900s, sherry-based vermouths are making a comeback in Spain. Since sherry is a fortified wine, producers like González Byass use amontillado or oloroso sherry as a base, sweeten it with Pedro Ximénez sherry, and macerate it with a blend of herbs and spices. La Copa features notes of cinnamon, nutmeg, clove, orange, and wormwood. It’s meant to be drunk over ice with an orange twist.

Though Lillet often appears on bar shelves next to the vermouths, it technically isn’t one, due to its lack of wormwood (it gets its light bitterness from quinine). It is a French fortified wine often drunk as an aperitif and comes in a range of flavors, including Blanc (dry), Rouge (sweet) and Rosé. Lillet Blanc has aromas of candied orange, honey, and pine resin, while Lillet Rouge has notes of red berries and vanilla, and Lillet Rosé has grapefruit notes. Teague often substitutes it for vermouth in cocktails, explaining “Lillet is softer and more floral than, say, a dry vermouth. It’ll give a whole different perspective to a martini.”