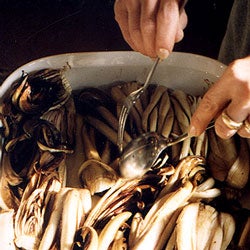 Cut radicchio into wedges and drizzle with olive oil, place directly onto grill and cook for a few minutes on each side until it starts to char. Top with a shaved cheese like manchego. Get the recipe for Baked Radicchio Tardivo di Treviso ». Roger Sherman
SHARE

Marcella Hazan schooled us in the making of this dish in her Venetian kitchen, after first taking us to the Rialto market to find some beautiful late-season radicchio from the city of Treviso—just one of many radicchio varieties sold in the market.

Marcella Hazan schooled us in the making of this dish in her Venetian kitchen.
Yield: serves 6