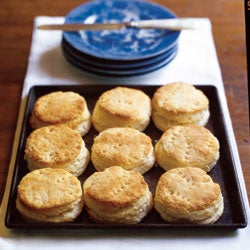 Edna Lewis and Scott Peacock, authors of The Gift of Southern Cooking (Knopf, 2003), are well-known American chefs with Southern roots. An unlikely duo with a 40-year age difference, they were brought together by their love for Southern cooking. According to these two, there are five secrets to making great biscuits: soft Southern flour; homemade baking powder; good, fresh, very cold lard; good, fresh, very cold buttermilk; and a very hot oven. Peacock made these for Lewis for her 75th birthday.

The biscuits stand up to their name; hot and crusty. We also find them quite delicious.
Yield: makes About 15