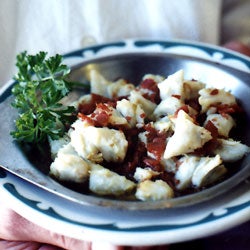 For over 30 years Haussner’s was the most extraordinary restaurant in Baltimore, Maryland, due to its very large collection of 19th century paintings. They called this popular dish a saute, but it was actually cooked in the broiler. If you don’t have Smithfield ham—a lean, very salty country ham—you can substitute prosciutto or westphalian ham (you may need to season to taste with salt).