A Jewish Cookbook for the 21st Century 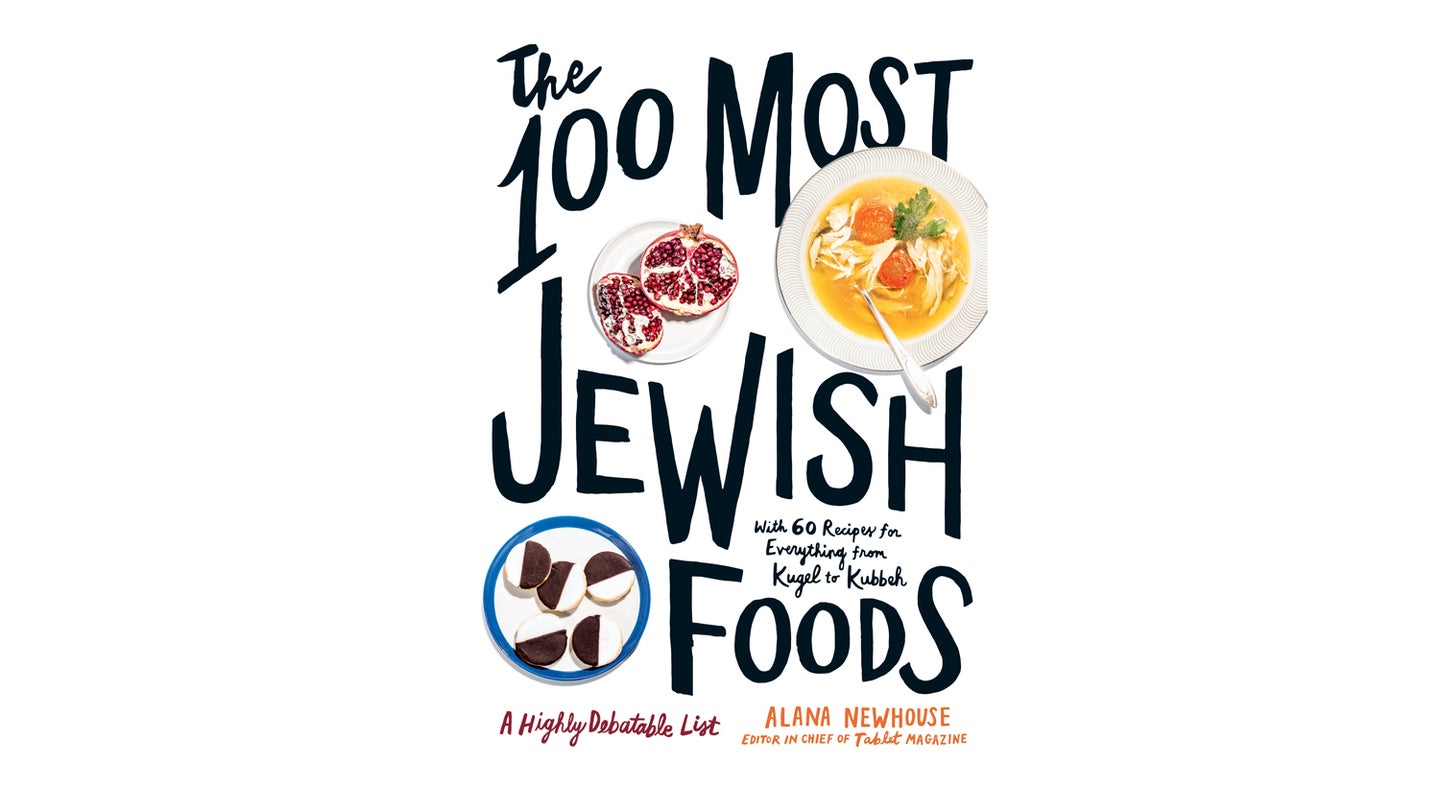 That soggy teabag you just threw away? It’s one of the most Jewish foods on the planet, at least according to a new book titled The 100 Most Jewish Foods, our September pick for the SAVEUR Cookbook Club. The collection of recipes and essays calls itself “a highly debatable list,” a wise caveat on the part of author Alana Newhouse, since such hierarchical pronouncements are the stuff of food fights among Jews across the globe (as my Jewish grandfather would say, “where you have two Jews, you have three opinions”).

If the book looks familiar, that’s because it’s version 2.0 of Tablet‘s web feature of the same name—you know, the one that basically broke the food internet in 2018. Maybe, like me, you spent hours down that culinary rabbit hole, clicking through pull-apart Yemeni breads, slippery herring fillets, and hot, plump blintzes, your salivary glands in overdrive. And maybe you were duly deflated to learn that there were no accompanying recipes.

That’s where this cookbook, published this March, comes in: It features recipes for (nearly) all of the dishes that had us itching for our aprons last year, from Melissa Clark‘s black-and-white cookies to Michael Solomonov‘s noodle kugel to Ruth Reichl‘s roast lamb. But Newhouse’s compendium is titled “most” and not “best” for a reason. Peppered among the appealing borschts and bialys and bagels are more questionable inclusions like margarine, plain boiled chicken, and Kiddush cookies, those tasteless, post-shul hockey pucks of my youth that Newhouse is an unlikely advocate for—so long as they’re homemade.

To make the cut, dishes had to have history, nostalgia, and deep cultural significance, not just be well-known, delicious, or photogenic (cholent, on page 81, is a case in point)—which leads me back to the used teabag. Wayne Hoffman writes that his parents would “share a single tea bag between the two of them…and then leave it on the counter for the next night.” He grew up thinking his parents were penny-pinching eccentrics, only to later learn that there were seeping teabags on Jewish countertops across America, an emblem of post-Depression thriftiness.

Raw, personal anecdotes like these make Newhouse’s Jewish cookbook feel current and important. It isn’t academic or encyclopedic, nor does it aim to be. The 100 Most Jewish Foods is as much at home in the kitchen as it is on the coffee table: Read it like an anthology of short stories, or cook it cover to cover.

With the Jewish high holidays around the corner, I hopped on the phone with Newhouse to hear firsthand what it was like to create a Jewish culinary canon for the 21st century, and to get her take on which dishes deserve a special place on our tables this season.

What was the catalyst for the book?
Alana Newhouse: At Tablet, we’ve always published lots of “best of” lists, from best Jewish songs to films to books, and when we thought about the inheritance of the Jews, we realized that we couldn’t ignore food. Just like Jews have produced all these other creative canons, we’ve also produced a culinary one. So we decided to put together a list of the foods that maybe weren’t the tastiest or the most popular but rather those that contain what we saw as the deepest Jewish significance.

Sounds like a tall order!
Hah! We first had to define what “Jewish significance” meant, and we landed on foods that had a crucial role in the story of the Jews. So, we included popular dishes like chicken soup or challah or matzo alongside foods that are more symbolic: an apple, for the Garden of Eden story, for instance.

Still, it seems hard to winnow down.
Let me put it another way. A British Jewish writer asked me, if someone produced the same type of book in the U.K., would it feature the same dishes? I said, it shouldn’t, because there are so many Jewish foods out there, and even if you’re polling a diverse Jewish crowd, you’ll never arrive at the perfect list. Your vantage point is always different depending on where you stand.

What was your vantage point?
This was such a big team effort at Tablet that my personal perspective wasn’t that important.

Tell me about some of your favorite recipes in the book.
My absolute favorites would have to be schmaltz and gribenes. Both are super simple to make and offer great bang for your buck. All you need is chicken skin and time. The result is a ton of fun. In fact, a New York magazine writer basically invited herself over to my house to learn to make schmaltz and gribenes, and she wrote an amazing essay about Jewish identity through the lens of chicken fat. It was beautiful! She took the book for what it was meant to be: an entry into Jewish food and her own past.

Then there are more complex dishes. Even for knockout bakers, making great challah is a challenge. Chopped liver and gefilte fish are rewarding cooking projects, too. I wouldn’t try making babka myself, but god, that recipe’s good. Somewhere in the middle in terms of difficulty are chicken soup; two kinds of dumpling soup (one Eastern European and the other Middle Eastern); yebra, Syrian stuffed grape leaves topped with caramelized apricots; and Yemenite oxtail soup brightened with tons of fresh herbs.

What should readers make for the high holidays?
Apple cake and honey cake. Both recipes are excellent. Brisket is, of course, a classic holiday recipe, since historically such a nice cut of meat was reserved for special occasions. It’s a rubber band: You can make it complicated or make it simple.

About half the book is essays. Which stand out?
You’ve got to read Ed Lee‘s entry on chopped liver. It’s astonishing—I won’t spoil it. Elissa Goldstein’s piece on leftovers seems like it’s going to be funny and glib but turns out to be one of the most poignant and heart-stopping essays in the book. Another piece of required reading is the entry on adafina, a stew that Spanish Jews cooked in secret during the Inquisition. These three feel rooted in history and nostalgia and the warmth of looking back while also not being blind about the challenges of that history—in other words, exactly what we wanted the list and book to assert. But beyond that, we wanted to show the enormous gift of the engagement of the outside world with Jewish culture.

Éric Ripert and Action Bronson are definitely outsiders, and they have essays in the book. How did you choose them? Everyone has a right to talk about Jewish food. The contributors come from all over. Many are not Jewish. You really don’t need enormous academic expertise to talk about food—you just need your own memories and attachments to it. Our writers come from all different backgrounds and ages, but we did push to get Jews from a range of geographical regions, so for the Persian rice recipe, we wanted a Persian Jew; for a Sephardic stew, we wanted a Spanish Jew. This representation was especially important when it came to foods that were frequently overlooked as part of the Jewish story.

There are essays on Hydrox cookies, Bazooka gum, a used tea bag, seltzer… Why was it important to include non-recipe entries on foods like these?
When it comes to Jewish tradition, what’s hard to wrap our minds around is that, unlike other cuisines, it’s not ethnographically delineated. Peruvian Jews didn’t have the same ingredients as Hungarian Jews as Yemeni Jews. But what they had in common was imperative and symbolism, and they had to use local ingredients to meet symbolic, religious targets. I think of Jewish cuisine as intrinsically domestic—cooked and eaten in the home and in the community, which makes it more colloquial than other cuisines. In other words, schmaltz is great not just because of its flavor but also because of its history, the inventiveness of it, and the knowledge of how it was, and still is, often made: in homes. When I talk and think about these dishes, I can almost feel the hands making them.

The book has an entry on Chinese food and Jews’ love for it. It also features an essay on bagels that essentially argues that they’ve lost their “Jewishness” because of their ubiquity. What do you call this? Borrowing? Cultural appropriation?
I find the cultural appropriation debate constraining in this case because different cultures have different histories. Some cultures have been quite isolated, and as a result, the products that got generated from those cultures are distinct. But for Jews, anything we’ve produced has been affected by the outside and in turn, affected the outside world around us. If that weren’t the case, we wouldn’t have survived. That some things are ours and some things are others’ may be a notion that exists in other communities, or something that will take hold in the future, but Jews haven’t practiced this type of purism in the last few thousand years. It’s therefore hard to retrospectively judge a culture and put that kind of pressure on its culinary output. Of course, it depends on the tone and posture of the person asking the question. As for the creators of Jewish cuisine, we’re essentially talking about women in the kitchen doing their best with a lot of constraints, not least oppression and isolation and hunger.

What’s the next shakshuka? In other words, what Jewish dish is underrated or undiscovered and ready for its “moment”?
For sheer Insta-prettiness you cannot get any better than malida, far and away the prettiest dish in the book. It’s not even hard to make. It’s an Indian rice dish traditional to the Bene Israel Jews that has pistachios, apricots, dates, kumquats, tangerines, dried plums—and if you really want to make it right, you sprinkle rose petals all over it. It’s meant to be a gift to the prophet Elijah. Don’t be turned off by the fact you’ve never heard of it!

I’m biased, but my grandmother’s recipe for haminados, Sephardic slow-cooked eggs, always comes out beautifully: The white gets all these veins and swirls from the brown cooking liquid, which also makes them taste chickeny somehow. There were a bunch of people on Instagram who made them, and I saw some incredible pics!

It’s hard to talk about being Jewish these days without the conversation turning political. The book seems to lack a political agenda. Was that intentional? Absolutely. But let me backtrack a little: I would not argue that the book is apolitical. Sure, it isn’t meant to follow what’s going on in 2019, but it does aim to animate and pull at a history that’s many thousands of years old. We wanted to ensure the book be relevant in two, three, even 10 years, so we placed it inside of a broader historical narrative. But anti-Semitism is all over the book. The isolation and oppression of Jews is almost an ingredient in half of these recipes.

There are tons of Jewish cookbooks out there. What makes this one unique to this moment?
The broad answer is this: Being Jewish is somehow a radioactive topic again. Jews and non-Jews alike are trying to figure out their feelings about Jewishness. They want to be more knowledgeable on Jewish identity, to understand it better. This can be intimidating. Giving those people an entry point like this book will hopefully give them the confidence to keep going, to keep learning. The narrow answer is: Why have kids if there are so many people on the planet? Because this one might be the one for you!