Humans evolved to love the taste of fat, and few fats are as beloved as butter. "Fat is delicious—that’s the basis of it," says Janee' Muha, who hosts “The Mobile Monger” podcast and is currently writing the standards of excellence for the American Cheese Society’s butter-judging process. But not all butters are created equal, and there’s a huge variety of great ones out there.

Most generic butter doesn't have much flavor to it on its own, according to Grace Bryan, the co-owner of Vista Bakeshop in Seabrook, Washington. "If I'm looking for everyday butter, I'm not super picky," she says. "But butter from a local farm or nicer European brands has a lot more pronounced flavor and will marry well with whatever you’re going to put it on."

Butter comes from separating the cream from the milk, pasteurizing it and then agitating it to pull the moisture from it until only the solids—the butter—remain. "To have the best butter, you have to have the best milk," says Muha, calling it "the truest expression of milk." While cheeses are aged or have added cultures to change the flavor, she adds, "With butter, there's not a whole lot you can do."

The flavor she does look for in butter is a pleasant sweetness that’s delicate and not too strong. "When you taste it, you want it to get your appetite going, so you want more," says Muha. When judging butters, she also looks for even coloration, spreadability at room temperature, and a firm close-knit texture.

That means that the bold tang of high-end cultured butters, like coveted Bordier from France, doesn't fit the exact description of an ideal butter. These taste and feel almost like cheese, with funky flavors and some uneven color. Even rarer is Animal Farm butter from Vermont, which Muha describes as having a "fantastic flavor" and unique texture that "had this slickness that just melted on your tongue." High-end cultured butters also have price tags more along the line of high-end cheese. Bordier runs $10 to $15 for a 125-gram bar (a little bigger than a standard 4-ounce stick) at specialty grocery stores—that is, if it’s even available in the U.S. Animal Farm is near-impossible to buy; Muha says she has paid $80 a pound for it.

We tasted more than 30 kinds to find out if it’s worth spending that kind of money for the most reputable, best butters, or if you should jump ship from the store brand. Even with the options from your local grocery store, you’ll find a range of sticks, from the least expensive that have a distinct "fridginess" to some extremely reasonably priced butters that matched up with many far-more-expensive brands. 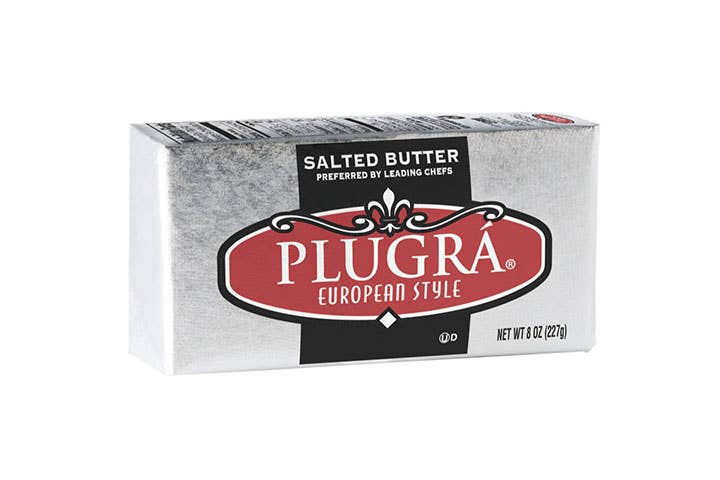 Why we chose it: Huge tangy flavor and smooth, spreadable texture combined with just the right amount of salt make this the ideal butter for topping toast.

In 1989, faced with increasing competition from imports, Dairy Farmers of America created European-style butter Plugrá, the name derived from the French “plus gras” meaning "more fat." While American butters typically run at 80 percent butterfat, this ramps up to 82 percent. But unlike many of the actual European imports these days, it’s not cultured, which makes the flavor all the more impressive; it stays a touch smoother and milder, thus more versatile. The salt walks the line between too little and too much, and with a smooth texture at room temperature, the butter spreads easily on toast. 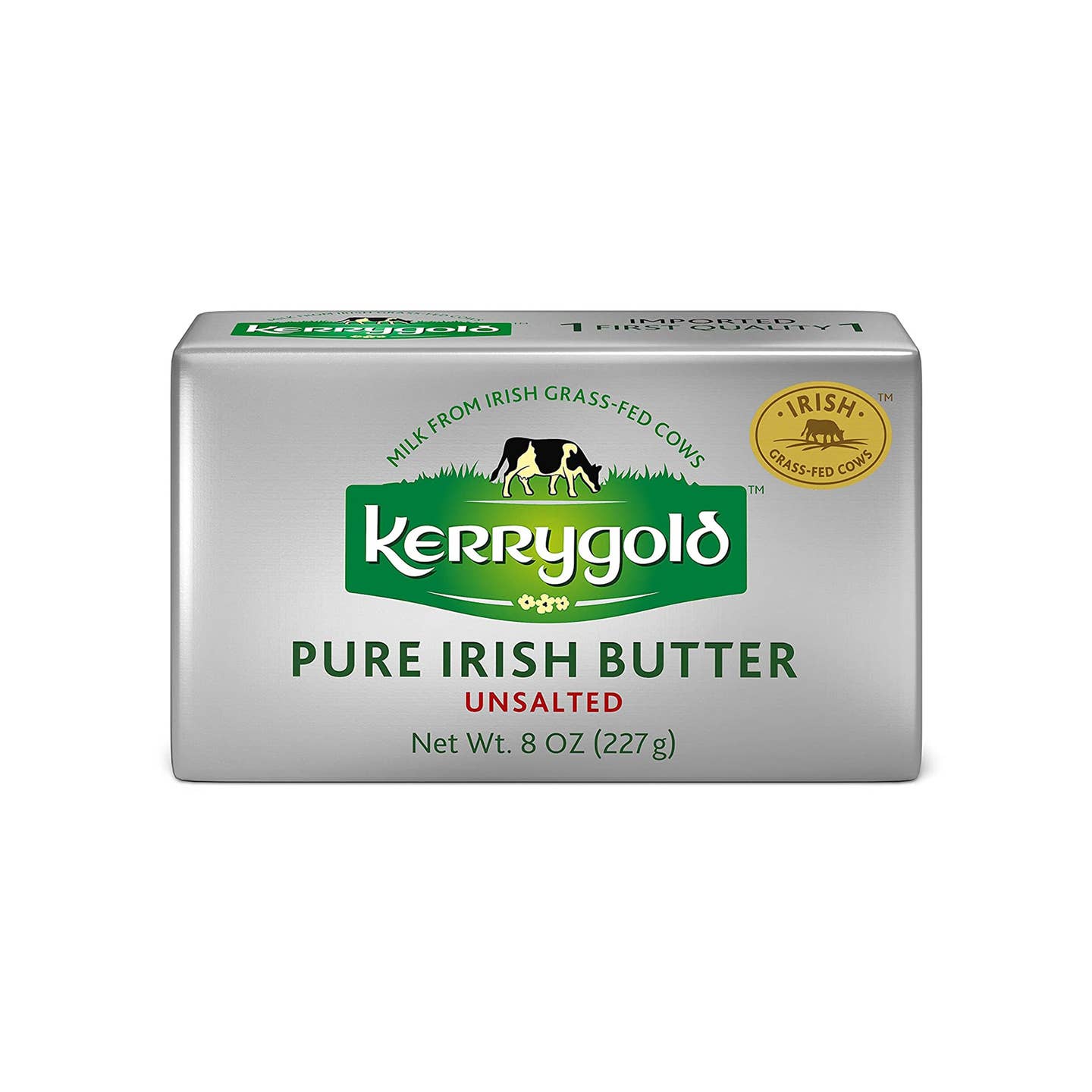 Why we chose it: The rich tanginess and silky texture of this cultured Irish butter lifts it above the bland category.

Kerrygold's pleasant yellow color matches the tang in the flavor and the consistent texture. It lacks some of the sought-after sweetness of sweet cream butters, but the complexity of the culture makes for a worthwhile trade-off. It also rolls into flour for baking notably well, making it an appealing option for both baking and eating. 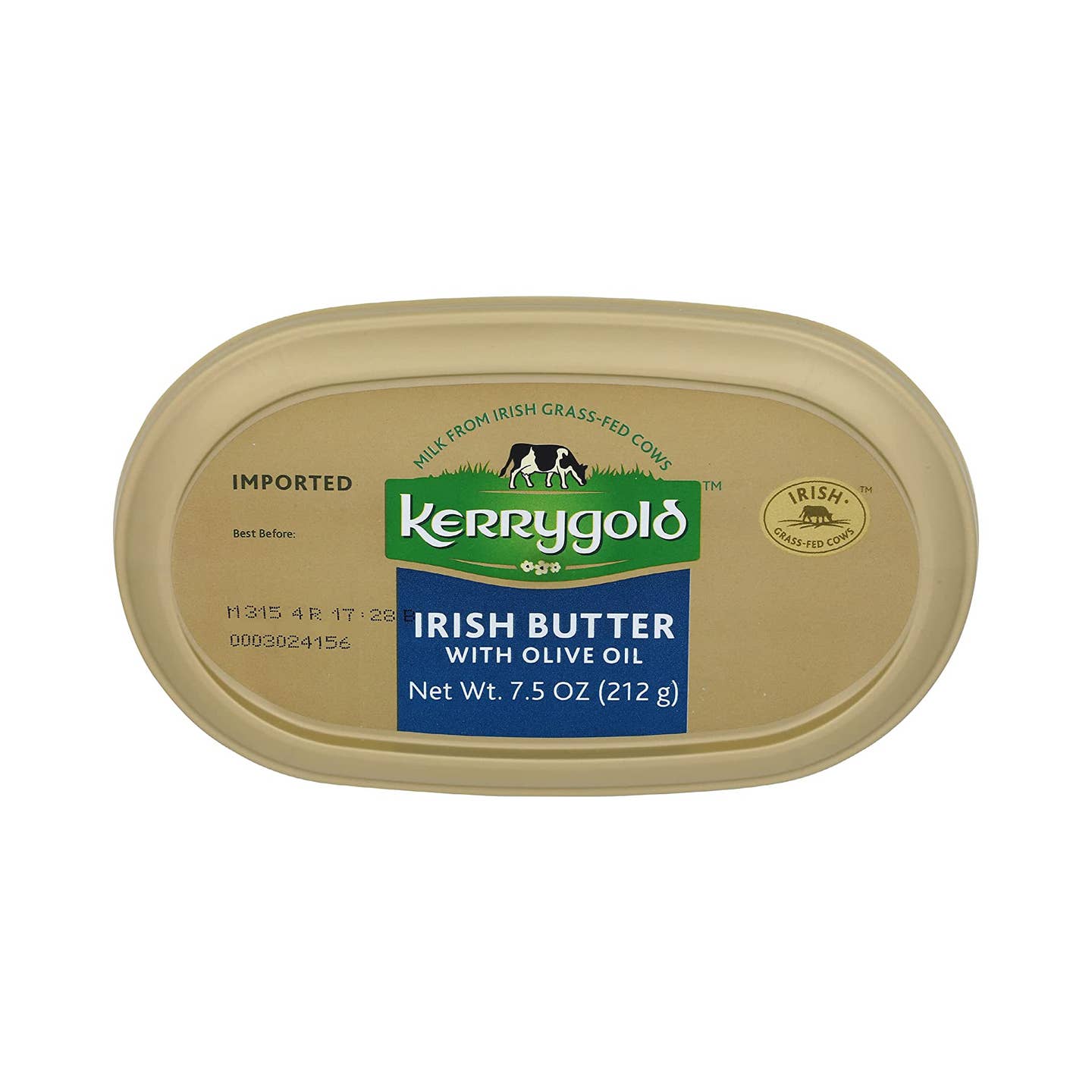 Why we chose it: Kerrygold shows that spreadable and hybrid butters can still offer flavor.

Hybrid butters mix in oils (avocado, canola and, in this case, olive) to imitate the flavor of butter but in a format that spreads straight from the fridge and reduces saturated fats. Mostly, they taste of salt and little else, and while they spread easily, the oils introduce texture issues. Kerrygold's olive oil version, which reduces saturated fats from 8 to 5 grams per tablespoon for those needing to watch their intake, keeps a light, spreadable texture similar to a whipped butter. Instead of trying to simply imitate butter, this product welcomes the addition of a detectable olive oil flavor, making it slightly different from a traditional butter but also far better tasting than any similar product. If you prefer butter simply for a spreadable texture, not health reasons, Kerrygold Naturally Softer Pure Irish butter is also quite good. 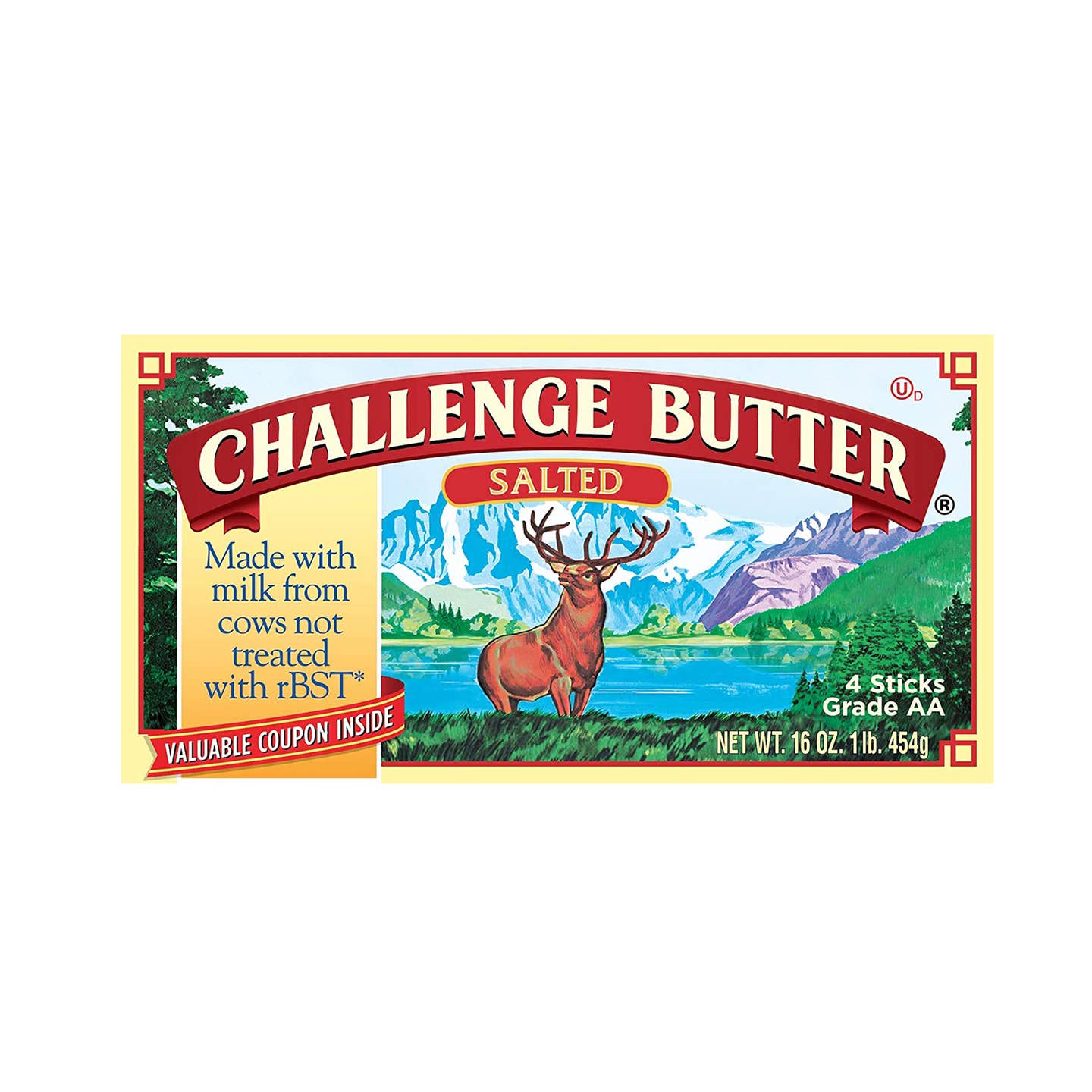 Why we chose it: This affordable stick balances color and richness with an appropriate salt level, making it an ideal everyday butter.

Few brands under $2 per stick are at the top of our tasters' lists; the options range from no flavor at all to way too much (bad) flavor. But while Challenge's unsalted sticks are weirdly pale and lardy tasting, the addition of salt and removal of "natural flavorings" make the salted version an appealing butter. It has a bit of richness not found in many other sticks, a nice yellow color and palatable salt levels. Rather than having the big flavor of European-style butter, it’s an inoffensive, mild butter for daily use. 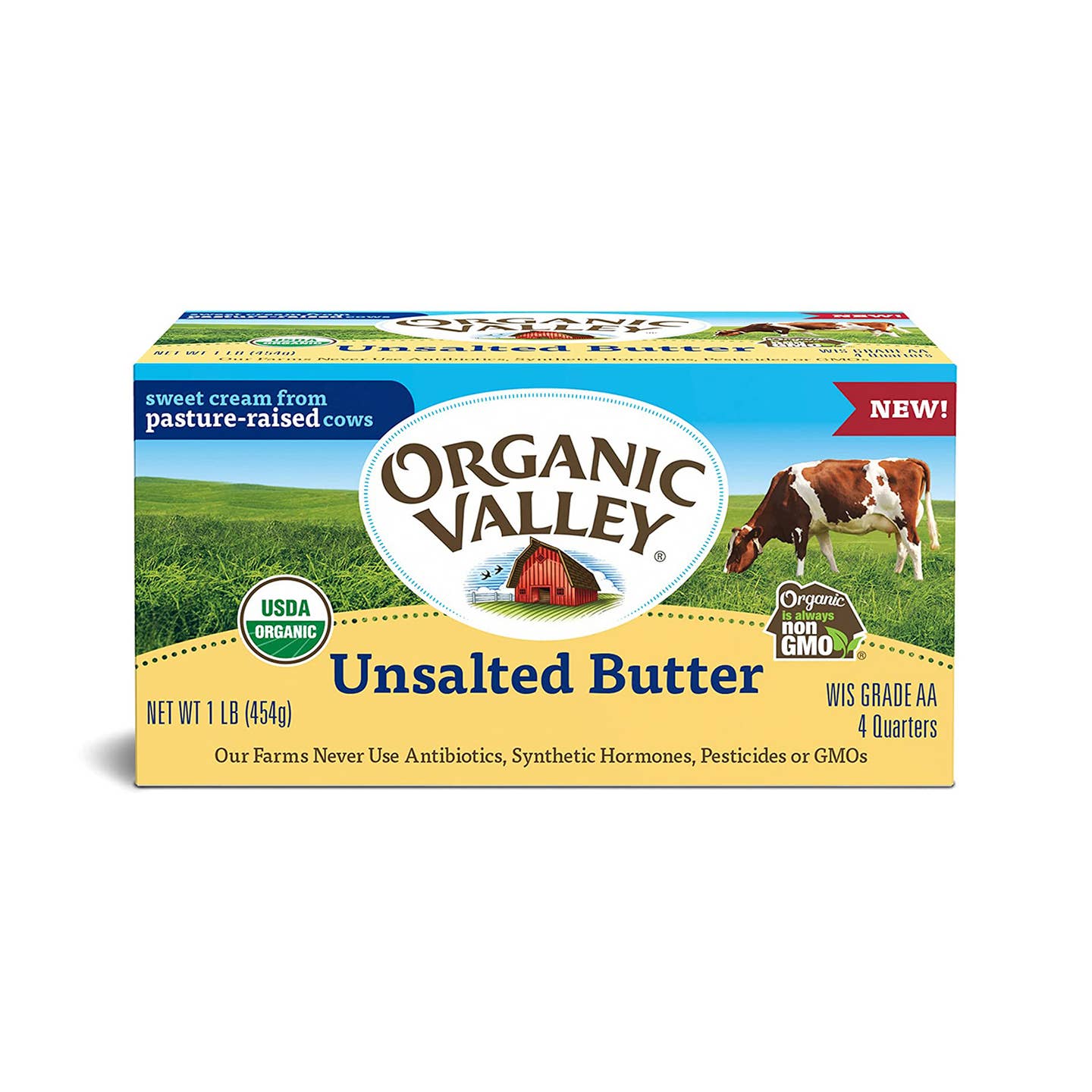 Why we chose it: This rare unsalted butter has sweetness and pure butter flavor with pleasant textures.

Until recently, Organic Valley's unsalted butter was cultured, leaving many vocal customers disappointed in the company. However, Organic Valley's current unsalted butter fits exactly the idea of what an everyday butter stick should be; it tasted like classic sweet cream butter and felt rich and creamy in the mouth. Like Kerrygold's unsalted butter, it works well for baking, though the standard four-stick box belies that it matches up to the foil-wrapped half-pound premium-feeling butter in price, too. Unlike the other butters tested, Organic Valley adds lactic acid to stabilize the flavor of the butter, though not to culture it, which works well, given how handily this beats similar products for flavor and texture. 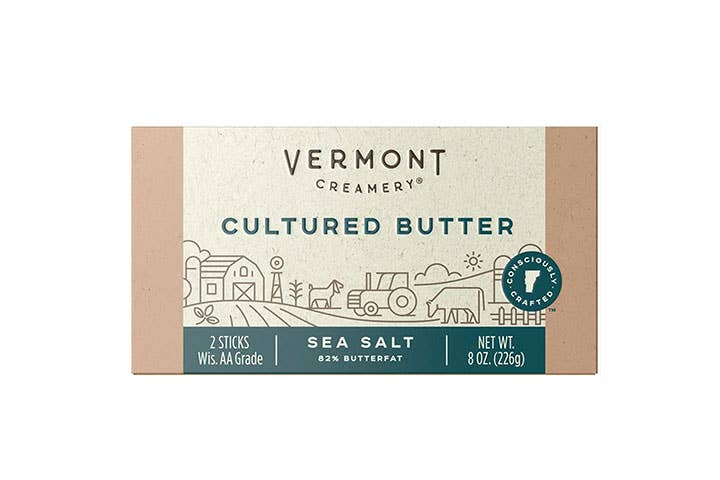 Why we chose it: Toeing the line between premium imports and everyday sticks, this salty, tangy butter packs impressive flavor.

Vermont Creamery's cultured butter with sea salt has a yogurt-like tanginess that makes it stand out among all the butters, even matching up to the ultra-premium imported French flavors, while matching the smooth, even texture typical of domestic sticks. It veers a touch on the salty side but has richness, which works well for spreading on toast, though makes it less versatile than more balanced butters. Still, such strong, well-rounded flavors and a quality feel make it a steal at a price level just below the European and European-style butters.

A small group of butter aficionados taste-tested more than 30 different butters sourced by our market editor, who researched the category with eyes on quality, price point and finding a good variety of styles. The butters were both salted and unsalted, ranging from $1 per 4-ounce stick up to $11 for the same amount. We rolled the unsalted ones cold into flour to feel how they worked for pastry. Then we sampled each salted and unsalted butter on its own at room temperature and on toast for the salted ones. We tasted the spreadables straight from the fridge, alone and on bread.

Features to Keep in Mind When Shopping for Butters

How fatty the butter is, or the butterfat percentage, is an important element for baking. Bryan advises looking for something 80 percent or above for pie crusts or biscuits. But all the butters we tested, with one exception, stayed above that level. Interestingly, some of our least favorite butters had very high butterfat levels while some with the best flavor had the lowest. So beyond baking uses, this is not something to look at too carefully as you choose butter.

Whether your butter is salted or unsalted is the most important thing, says Bryan. As a pastry chef, she never buys salted butter, as unsalted versions allow her to control the salt levels in her recipes. Muha says she prefers a salted, cultured butter for eating. The salt should be spread evenly throughout and make the butter taste better on its own, making it good for simple uses like spreading on toast. Some lower-end brands that use "natural flavors" in their unsalted butter skip that in the salted version because of the better flavor and stability that salt brings.

Sweet cream butter describes the most basic version of butter: no salt or culture added. Cultured butters have good bacteria added to ferment the cream before churning, resulting in a richer, cheesier butter. While you can bake with cultured butters, you need to adjust for additional flavoring; they’re primarily prized for complex flavor and spreadability.

Only a handful of the butters we tasted had added ingredients (usually listed as "natural flavors"), and none of them seemed to derive much benefit from them. Muha says she sometimes sees bottom-shelf brands add xanthan gum or guar gum for texture. "Don’t go with the lowest end or anything blended with margarine," says Bryan.

Q: How long does butter last?

“A very long time," says Bryan, as long as you keep it in your freezer. As for the butter in your fridge, Muha says that depends on what else is in there. If you have a bunch of onions, for example, the butter will pick up their smell quickly.

Q: What type of butter do chefs use?

While working at Canlis, one of Seattle's most acclaimed restaurants, Bryan says the bread service came with a local cultured butter called Cherry Valley. Muha says many chefs she knows use Crémerìe Classique.

Q: Should I keep my butter in the fridge or freezer?

Both Bryan and Muha keep some butter in the fridge for use in the near future, store a backup in the freezer, and keep some on the counter at room temperature for immediate use. Muha also stores her countertop butter in a ceramic dish, because butter bells don't work well in the Pacific Northwest climate, she says.

While most of the butters seem fine on their own, the top brands really show how much better they are when directly compared. Many of our testers now see the flaws in their own preferred brand. So if you love your current brand, like the price, and can find it easily, don't try to match it up to others. Otherwise, we've done the testing, and these are the butters that stand out from the crowd.