The Case for Fresh Horseradish Root

Grating this spicy, pungent root by hand can transform your vinaigrettes, pastas, meats, and more. But you may want to break out the goggles 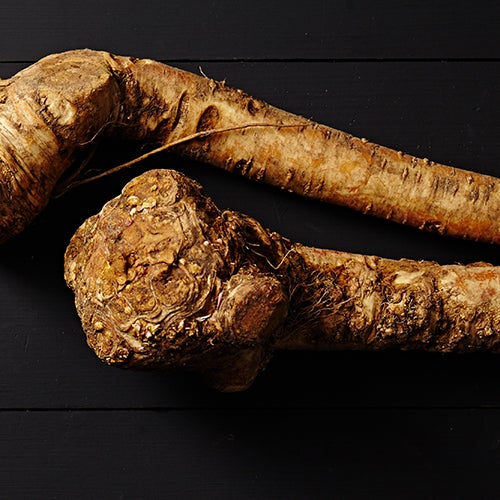 A horseradish root the size of a war club rests on my kitchen counter, covered in dirt and gnarled like an arthritic joint, looking more useful to fend off invaders than flavor my food. Washing and peeling a vegetable so tough requires rigor. Grating it causes me to weep. When cut, the root releases pungent enzymes that produce the sinus-clearing volatile oil characteristic of many plants belonging to the Brassicaceae family, which also includes mustard, watercress, capers, and wasabi. In Roots, the Definitive Compendium, author Diane Morgan recommends wearing fancy onion goggles while shredding horseradish with a box grater; and when chopping with a food processor, advises stepping away swiftly after removing the cover to escape the fumes.

She’s right. This stuff can blow your hair back. The reward, however, is a bracing but nuanced taste unlike the diluted supermarket variety suspended in a vinegar base. (Some commercially produced horseradish can be cut with turnip, high fructose corn syrup, soybean oil, or other additives.) The fresh root is incomparable. A dose jolts me right out of my winter blues.

According to the Oxford Companion to Food, horseradish (Armoracia rusticana) is a wild plant native to Europe and western Asia. A hardy perennial, it can grow to almost five feet tall and will thrive in some of the coldest climates. The name horseradish is quite old, from an earlier variation of the word hoarse, meaning coarse or strong. The French term, raifort, also means strong root. Despite the name, it is only distantly related to the common radish.

Long ago, horseradish was prized for its medicinal properties, as a medieval curative for everything from kidney stones to gout. But the applications go on from there. The first located use as a condiment is in an herbal treatise by German botanist Leonhart Fuchs titled “Notable Commentaries on the History of Plants” (1542), although records indicate that it has appeared as a symbolic bitter herb at Passover seders since the Middle Ages. In 1597, the British herbalist John Gerard referenced it, and horseradish cream sauce has topped the Sunday roast ever since. It has historically been paired with fish as well: Red chrain, a horseradish relish colored by beetroot is still common to Eastern European Jewish communities, often paired with gefilte fish. (The Russian version khren confirms its popularity in Slavic countries.) And a roast lobster recipe from a rare English manuscript (ca. 1690-1802) in the Lawrence J. Schoenberg collection at University of Pennsylvania includes a sawce [sic] of white wine with “some swe[et] hearbes 2 anchovis a litle horseredish a litle lemonpeal & onion.” (Today one of my favorite modern fish pairings is the smoked eel sandwich made famous by chef Jeremy Lee of Quo Vadis in London.)

European colonists introduced horseradish to the New World. Both Thomas Jefferson and George Washington mentioned the plant in their garden journals. The first commercial jars of prepared pure horseradish are credited to Henry John Heinz, who began shaving and packing roots grown in his own Sharpsburg, PA garden by 1869. He borrowed his mother’s recipe, and the rest is condiment history. (Tomato ketchup came after.)

This year marks the 32nd International Horseradish Festival in Collinsville, Illinois, the self-proclaimed horseradish capital of the world. Events include a Little Miss Horseradish pageant, a root toss, and a Bloody Mary recipe contest. This Southern Illinois region is part of the American Bottom, the Mississippi flood plain rich in potash where horseradish thrives, and if you don’t raise the plant in your own garden, or know a farmer who does, chances are good the horseradish in products on your grocery shelf was cultivated here.

The flavor of fresh horseradish—spicy in the same way hot mustard is—is most commonly tempered with vinegar, which stabilizes the flavor and halts some of the reaction of those potent enzymes that tickle our noses and tongues. In Roots, Diane Morgan offers recipes for horseradish vinaigrette, horseradish gnocchi, and horseradish-and-beet gravlax, a testament to the adaptability of the humble root. I have infused horseradish pickle in aged chive blossom vinegar but equally love recipes that employ fat and cream to counter its natural heat. I’ve added it to a sour cream-yogurt mixture to dollop on sweet potato latkes and mashed it into a compound butter to rub on a rib eye.

As I stand in my far northern New York State kitchen preparing dinner, the wind is gusting to 60 miles per hour, and frost blankets the windows. Snow fog lowers visibility close to zero. I fully expect to lose power, and possibly a few old apple trees, before the night is done. At this time of year, staying warm is a priority, and keeping food hot is another. Here, where my USDA plant hardiness zone is a puny 3, we have several months to go before the first tender green shoots peek out of the garden ground. Until then, this fiery root, when pared back to expose a creamy core, will keep me grounded. Now all I need is to find my ski goggles.