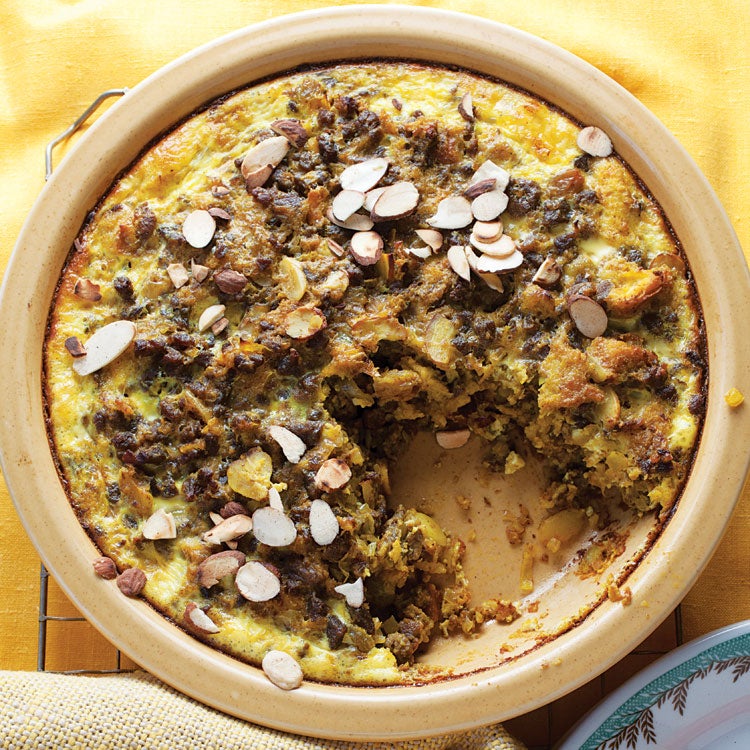 This Cape Town specialty generally consists of spiced meat mixed with chutney and tamarind paste and milk-soaked bread, poured into a dish, topped with a custard of egg and milk, and baked until it's golden on top. Get the recipe for Bobotie (South African Meat Pie) ». Todd Coleman
SHARE

I almost feel uncomfortable describing bobotie as a type of meat loaf, because it’s so much more than that. A Cape Town specialty and one of South Africa’s best-known dishes, it generally consists of spiced meat—normally beef, sometimes lamb—mixed with chutney and tamarind paste and milk-soaked bread, poured into a dish, topped with a custard of egg and milk, and baked until it’s golden on top. The dish’s origins go back to the mid-17th century, when the first Malay slaves were brought to the Cape of Good Hope, and with them, their cooking. At the same time Dutch colonizers brought a taste for sweet things—hence the golden raisins mixed in with the meat; Indian immigrants, who began arriving in the late 19th century, contributed warming curry spices, giving rise to the classically Cape Malay balancing act between sour, spicy, sweet, and savory flavors that makes bobotie so satisfying. Often almonds are part of the recipe, and even bananas, but there are limits to what you can do and still call it bobotie. I believe the traditional way is the best way. —Reuben Riffel, chef-owner of the Reuben’s restaurants in South Africa

One of South Africa's best-known dishes, this lamb meatloaf/frittata hybrid is flavored with golden raisins, curry powder, and tamarind; set in an egg custard.
Yield: serves 8