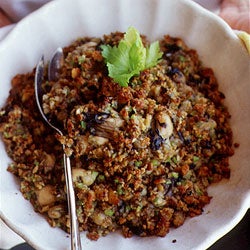 This cornbread and oyster dressing is a holiday staple around the Chesapeake Bay. Christopher Hirsheimer
SHARE

Adjust the ratio of oysters to bread crumbs in this recipe according to taste—and budget.

Stuffing recipes from the East and Pacific Northwest were found to have this special ingredient-oysters.
Yield: serves 8