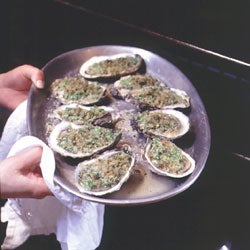 Author Ed Giobbi prefers clams or mussels to oysters for his La Vigilia menu; his daughter usually opts for oysters—simply because, she says, they’re easier to open.

This is a simple way to prepare these tasty bivalves.
Yield: serves 8