Digging into Indian cuisine? These tools make it easy 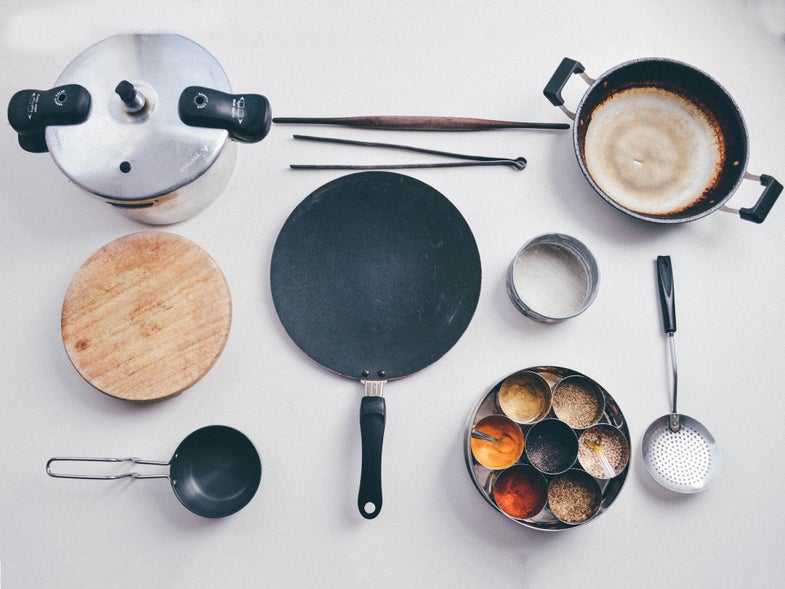 To cook a proper Indian meal, it takes more than a well-stocked spice rack. A strong hand with fragrant spices is important, but so is strong technique. And while you can make flaky chapatis, crispy pakoras, and belly-warming rajma with the standard tools found in American kitchens, there are a number of Indian tools that are designed to help make dishes flakier, crispier, and more belly-warming—by doing less work.

These tools have been crafted and shaped with the Indian cook in mind, and they offer a level of finesse and control you won’t get with standard kitchen equipment like saucepans and rolling pins. Best of all, none of the 10 tools below are single-purpose items. They’re durable and useful for all sorts of tasks; use them to to help you roll, steam, fry, and sauté your way to an Indian feast.

The Indian rolling pin, or belan, is much thinner and lighter than its American counterpart, and comes with tapered edges. It’s crucial to cranking out thin, circular rotis, chapatis, puris, naan, and more. Its slender body lets you apply pressure to specific areas for more evenly rolled flatbreads. It’s also handy for rolling out finicky doughs that might tear easily under the weight of a regular rolling pin; it’s also good for shaping the crust of a homemade pizza.

The patli, which is also known as a chakla, is the yin to the belan’s yang; one is very rarely sold or found without the other. Circular and wooden, a patli is an elevated board that’s used as a rolling surface. Indian kitchens didn’t always have countertops, so the patli made it easy to roll out flatbreads and other items while sitting on the floor. With its raised height and easy-to-clean surface, it also nice doubles as a serving platter for cheese or a pile of cookies.

You’d be hard pressed to find an Indian kitchen that doesn’t have a pressure cooker. When a single Indian meal climbs to upwards of five or six dishes, a tool that cuts cooking times from hours to minutes is highly prized. A pressure cooker can make perfectly fluffy rice in 15 minutes and can also be used to steam idlis, cook dry lentils and beans, and braise tender meaty curries.

The best way to cook flatbreads is on a tawa, a circular and slightly concave griddle. It distributes heat evenly from center to edge, essential for soft rotis, evenly cooked chapatis, and even crispy, melty quesadillas.

The chimta, which is also often referred to as a chippio, is a sturdy pair of tongs with pointed or flared tips, usually made of iron but sometimes stainless steel. It’s ideal for flipping flatbreads on a tawa and for holding rotis (or corn tortillas) directly above a flame to achieve a light char.

Often referred to as the Indian wok, the kadai is traditionally made with cast iron (though stainless steel and non-stick versions are now available). However, unlike traditional woks, it has a flat bottom and much steeper sides, which make it perfect for frying. Pakoras, samosas, and gulab jamuns all bubble up nicely in a kadai, but don’t limit yourself to Indian snacks: this is an all-purpose deep-frying vessel.

Many Indian snacks and desserts required being turned while frying to ensure even browning, and this is where the jhaara comes in. It’s a perforated round metal spatula, which also helps to drain oil from items pulled freshly out of the kadai.

Indian cooks tend to make flatbreads daily from scratch. To ensure that the dough is smooth and not clumpy, they run flour through a charni, which is sieve with an ultra fine mesh set in a tall metal rim. Line the charni with a tea towel or cheesecloth and it works as a strainer for yogurt as well.

A number of Indian dishes are finished off with a sprinkling of fried spices, or tadka. The spices are fried fast and furiously in piping-hot oil, which, left on its own, leaves oil splatters around your kitchen. Tadka pans are small, round, and deep, so you only need a little oil to cook the spices, and they have long handles to keep you, and your skin, far away from any potential burns.

Most Indian dishes call for a flurry of spices, not just one or two. Instead of rummaging through containers of this and bottles of that, invest in a masala dabba (translation: spice container) for your most heavily used spices. The dabbas—which are most commonly made from stainless steel—typically contain small bowls for each spice and a tiny spoon perfect for scooping and sprinkling. They don’t have to be used to organize just Indian spices—buy a couple to organize other frequently used dried herbs and seasonings.