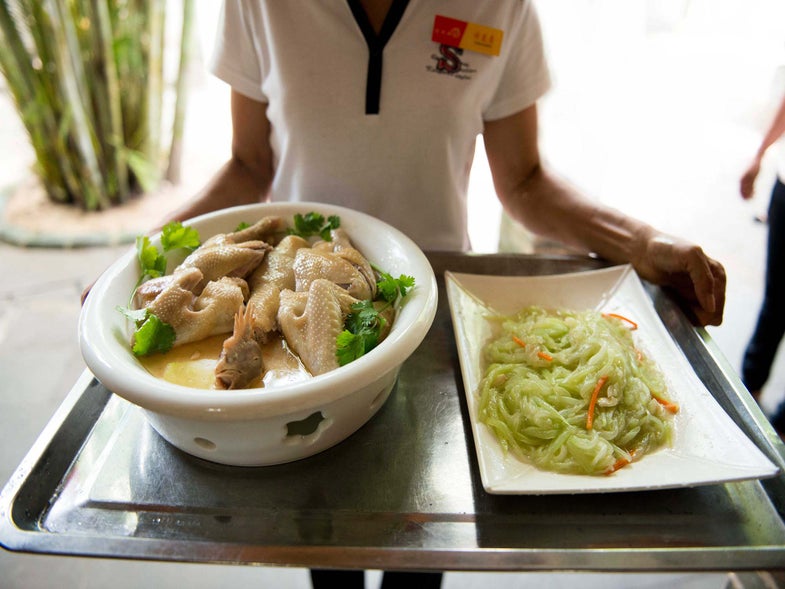 To best replicate the taste of a Hainan-raised chicken, which is fed on a special tropical diet and kept small in size, use an organic, free-range bird, preferably no larger than three pounds. In this preparation, which most closely resembles stateside Hainan chicken rice, the bird is poached gently in a ginger-infused broth and served with rice dressed in the chicken’s rendered fat and a bright dipping sauce made with calamansi, a native citrus hybrid.

What’s calamansi? The thin peel of the calamansi, a citrus native to southern China, is sweet, while its juice is quite sour. The fruit is most often squeezed over cooked fish or in dipping sauces, such as the bright one served alongside Wenchang chicken. Also found in Florida and California, the citrus tastes like a cross between a lime and a kumquat, and, historically, has been puréed and turned into cakes and confections stateside. We love its floral, acidic juice showered over grilled chicken or mixed with sugar for a refreshing drink. You can also eat it raw, enjoying its sweet peel and tart flesh. When calamansi is in season (early winter to late spring), you can find it in farmers’ markets in Florida or California or purchase it (under the name “calamondin”) from melissas.com.

Featured in: The World’s Best Chicken Comes From Hainan