A Beginner’s Guide to Biryani, the Ultimate Rice Dish

Take a regional tour of this elaborate South Asian essential 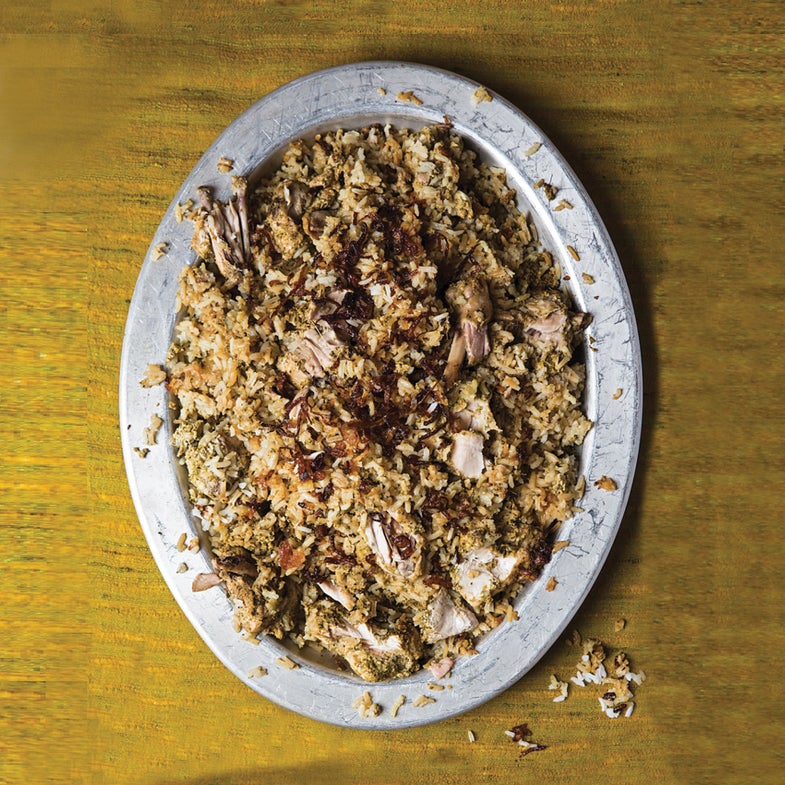 Biryani is my go-to dinner party dish. A one-pot meal of rice, meat, and aromatic spices, it’s rich in flavor, grand in tradition, and elaborate enough to take center stage at holidays and celebrations, such as Eid or weddings. Each bite is suffused with spice, roasted nuts, dried fruits, or caramelized onions—deep and layered in flavor.

The dish’s origins are up for debate, but most food historians agree that the precursor to South Asian biryani first emerged in Persia, probably as an unfussed mix of rice and meat, and traveled to the subcontinent through trade, pilgrimage, and conquest.

Once in South Asia, biryani bloomed. Distinct regional varieties can be found wherever various Muslim food cultures influenced the cuisine—in Hyderabad, a city synonymous with biryani, but also across South India on the coasts of Gujarat, in West Bengal.

Here is just a sampling of the subcontinent’s dizzying array of biryanis; there are dozens upon dozens, and their differences are often subtle. Biryani, a cookbook by Pratibha Karan published by Random House India in 2009, is one of the most comprehensive collections of regional biryani recipes, and many that I mention here can be prepared with instructions from that slim and informative volume. 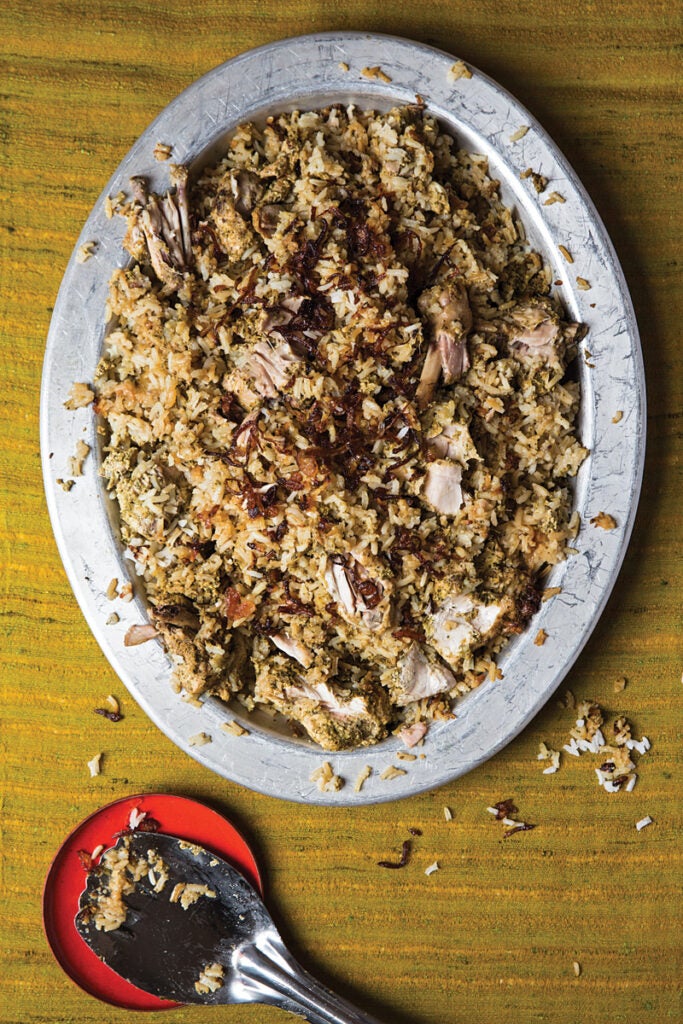 Get the recipe for Hyderabadi Chicken Biryani »

First, it helps to know the dish’s key components and cooking styles:

Rice: South Asia’s most famous rice export is the aromatic Basmati, but regional varieties of biryani use a number of native grains, such as sweet jeerakasala or almost corn-flavored seeraga samba, both grown in South India.

Meat: Chicken, mutton, goat, fish, prawns, beef–all are used in biryanis, based on regional preferences and availability. Coastal sub-cuisines along the Arabian Sea are generous in their use of fish and shrimp, for example.

Marinade: Spiced yogurt marinades are the most common, as yogurt is a commonly used acid to tenderize meats across South Asian cuisines.

Spices and aromatics: Biryani’s richness and complexity comes, in part, from its layers of spices. Both ground and whole spices, as well as spice mixes, such as garam masala, are used in the cooking process, as are fresh herbs and seeds, such as poppy. Biryanis are garnished with nuts, dried and fresh fruits, caramelized onions, and more fresh herbs.

There are three main biryani cooking methods to keep in mind:

Dum: A slow-cooking method in which the cook layers parboiled rice and raw, marinated meat in a heavy-bottomed vessel, sealing it with dough and cooking it for hours over a low flame.

Kacchi biryani: A method in which raw marinated meat is layered with raw rice and cooked together, dum style.

Pukka biryani: An alternative method in which meat and rice are par-cooked separately and assembled and steamed together. 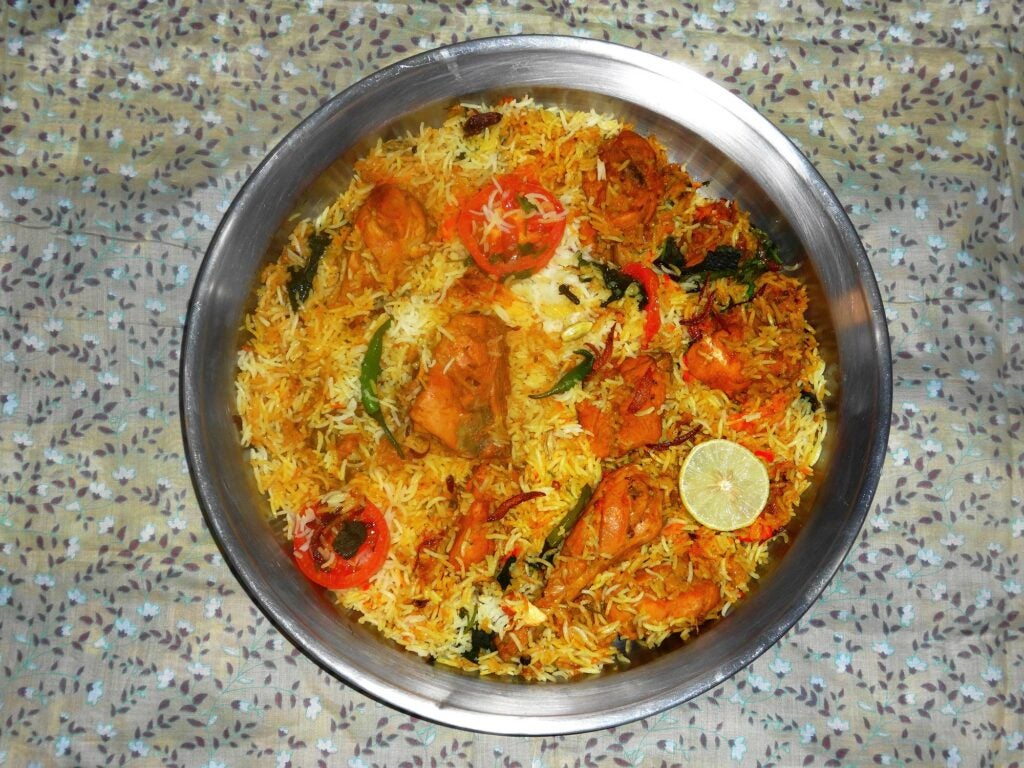 The pièce de résistance of biryanis, and a prime example of the kacchi style. Hyderabadi biryani is moist, robust, and spicy, and the rice and meat are infused with a heady blend of aromatics: cardamom, clove, cinnamon, saffron. 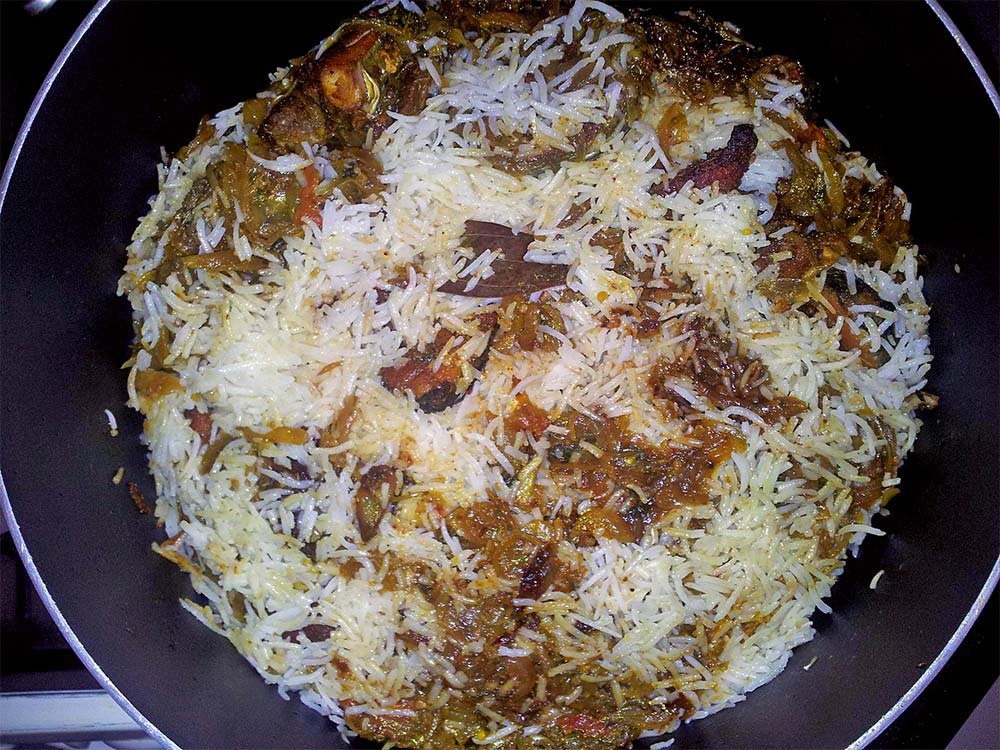 This pukka biryani hails from the Malabar Coast in northern Kerala, where descendants of Yemeni traders who arrived in the first century and brought with them their own ingredients and culinary traditions, which they then adapted to their new circumstances.

In northern Kerala, biryani is made with jeerakasala (a.k.a. kaima) rice, a sweet, extraordinarily aromatic short-grain rice only grown in the southern state. It often features seafood or meat marinated in cilantro and mint, and is seasoned with coconut and curry leaves. 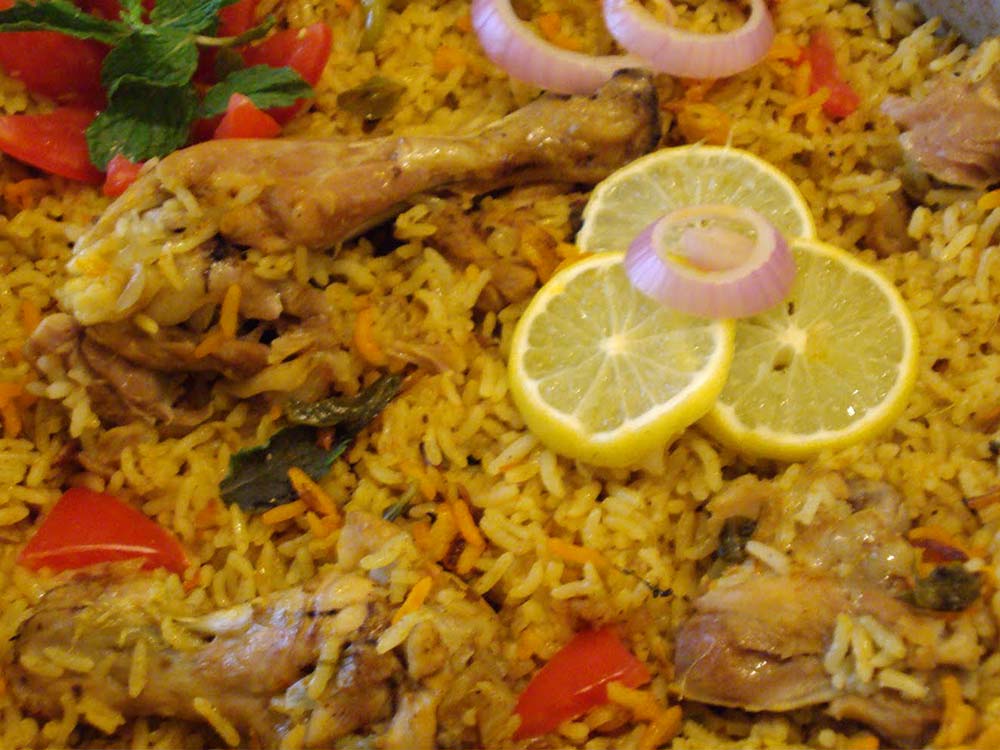 Both pukka styles, these biryanis incorporate potatoes, which absorb the meat’s juices and the spices’ aromas during cooking, especially bitter turmeric and mustard oil, both unique to this variety of biryani.

The marinade incorporates nutmeg, mace, and subtle touches of black pepper and pandan. It is nearly always garnished with halved hard-boiled eggs. 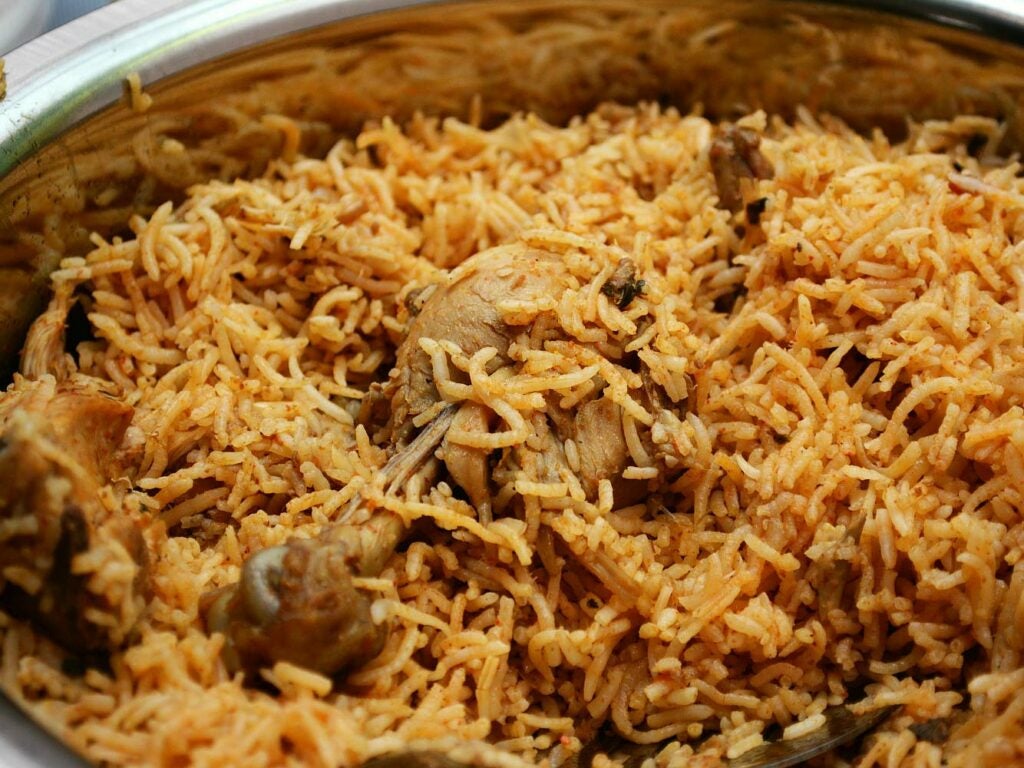 A trio of biryani from the southern Indian state of Tamil Nadu. They’re prepared with seeraga samba, a starchy, almost egg-shaped short-grained rice grown in the state.

Chettinad cooking hails from Tamil Nadu, 250 miles south of the city of Chennai. It’s fiery and aromatic, and heady with black peppercorns, star anise, and cinnamon. The region’s biryani incorporates all of these flavors, with an added dose of heat from ground green chiles.

Ambur biryani is a kacchi biryani from Vellore in northern Tamil Nadu, and traces its lineage to the court of Nawab of Arcot, according to legend. The biryani is traditionally made with mutton marinated in a mint-infused yogurt sauce, which makes it herbier and milder than its Chettinad cousin. 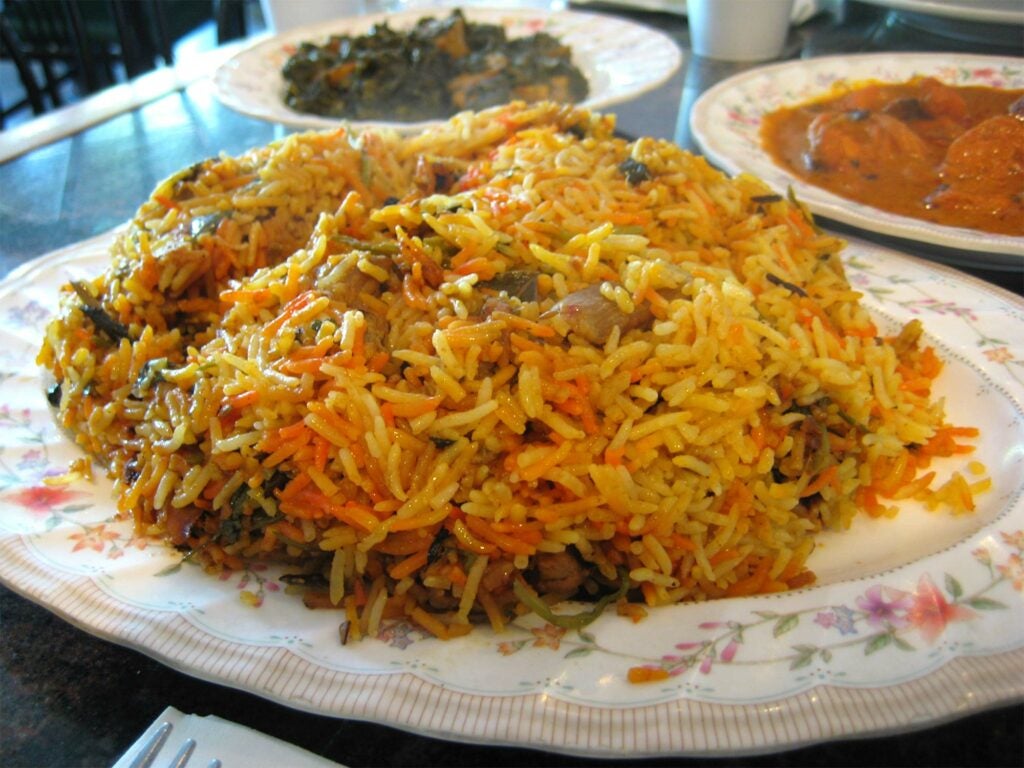 A trifecta of biryani was created by communities in Gujarat, India and Sindh, Pakistan.

Dawoodi Bohras are followers of a sect of Shia Islam who migrated from Yemen to western India in the 16th century. Their bohri biryani is characteristically mild and smoky, and uses dried fruits, including prunes and raisins, to create its distinctive sweet-and-sour flavor.

Memoni (a.k.a. kutchi) biryani and sindhi biryani both originated in Sindh in Pakistan, and are similar in many ways, but diverged as these communities’ diasporas scattered. Memonis were 15th century Hindu converts to Islam; they originally settled in Bhuj, Gujarat, but many migrated to Karachi after the Partition of the subcontinent in 1947. Their biryani is a spicy-hot pukka style, and features lamb, blanched tomatoes, potatoes, and prunes.

Sindhi biryani is the biryani I grew up with. My mother’s biryani stars chicken, although mutton, prawn, and shad fish often found their way onto our table. (In Sindh, my grandmothers would have used palla machli, a herring native to the Indus River). Sindhi biryani is tangy, because the marinade is heavy on the tomatoes and yogurt, and is seasoned with mint and coriander and garnished with prunes.

Get the recipe for Hyderabadi Chicken Biryani »