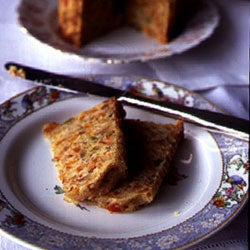 Not all fruitcakes are dark, dense, and meant for “aging”. Some, like this version—inspired by Italy’s pandolce d’oro (literally sweet cake of gold)—are light in texture and color, and are best eaten sooner rather than later.

This version of fruitcake—inspired by Italy's pandolce d'oro (literally sweet cake of gold)—is lighter in texture and color, and best eaten sooner rather than later.
Yield: makes 2 Cakes