16 Georgian Recipes That Go Beyond Khachapuri

But don't worry, we've also got plenty of recipes to satisfy your cheesy bread cravings 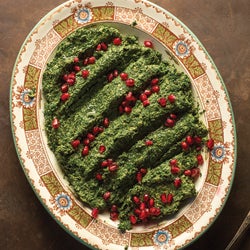 The Republic of Georgia sits in the Caucasus right at the threshold of Europe and Asia, and its regional and ethnic differences, diverse border cultures, and mountainous terrain have all led to a uniquely varied culinary tradition. They are known for khachapuri, a perfectly gooey, eggy, cheesy bread boat that is great any time of day (or night), but there are plenty of other reasons to love Georgian food. From fried eggplant stuffed with walnut sauce to a hearty bowl of khashlama, here are our favorite ways to enjoy Georgian food.

This traditional Georgian cheese and egg bread is best eaten hot. Use a spoon to stir the yolk and butter into the molten cheese, then tear off a piece of fluffy crust to dunk into the cheesy well. Georgians typically make this savory pastry with a mixture of imeruli and sulguni cheese. We find that a blend of low moisture mozzarella and strong, tart feta gets you very close to the traditional version. Get the recipe for Georgian Cheese Bread (Adjaruli Khachapuri) »

This cheese-filled Georgian flatbread has its roots in the west-central region of Imereti, but by now it is a popular part of the elaborate feasts, known as supras, held across the country. Georgians typically make this savory pastry with a mixture of imeruli and sulguni cheese. We find that a blend of low moisture mozzarella and strong, tart feta gets you very close to the traditional version. Get the recipe for Georgian Cheese Bread (Kachapuri Imeruli) »

While this Georgian flatbread is occasionally referred to as “Svanetian khachapuri”, kubdari contains none of the gooey cheeses of its Imeruli and Acharuli cousins—their defining ingredients. Instead, the Svaneti Georgians traditionally fill their flatbreads with spices and chopped beef, goat, pork, or lamb. Our version uses ground lamb, seasoned with onions, coriander, and paprika. Feel free to swap the lamb out for any of the other meats, or a mix, if you prefer. Get the recipe for Georgian Flatbread Stuffed With Lamb and Onions (Kubdari) »

Khachapuri tarkhunit (literally, “cheese bread with tarragon”) is a filled bread common in the nation of Georgia. For our version, we also added a handful of fresh dill and a bit of ground coriander to the mild farmer’s cheese base. Khachapuri tarkhuni is best enjoyed hot: tear off a piece of the fluffy crust to dunk into the herb-and-cheese well. Get the recipe for Georgian Cheese Bread with Fresh Herbs (Khachapuri Tarkhunit) »

This Georgian flatbread is from the region of Samegrelo, which borders the Black Sea. It is not, however, beach food. Stuffed with salty cheese and griddled, then heaped with even more cheese and baked, this is stick-to-your ribs winter cooking at its best. Georgians prepare this bread using a crumbly local cheese called imeruli, or a mixture of imeruli and the milder, more elastic sulguni. We substituted a mixture of low moisture mozzarella and strong, tart feta that gets you very close to the traditional version. Get the recipe for Megruli Khachapuri »

A specialty of dumpling houses in Tbilisi, Republic of Georgia, these large, juicy pork-and-beef-filled pockets are spiced with chiles, cilantro, and fenugreek. This recipe first appeared in the 2012 SAVEUR 100, with the article Georgian Dumplings. Get the recipe for Georgian Dumplings (Khinkali) »

This crisp-skinned bird is cooked in a generous amount of butter and served with a delectable pan sauce of garlic and cilantro. A small chicken can be substituted for the Cornish game hen. Get the recipe for Georgian-Style Cornish Game Hen with Garlic Sauce (Tabaka da Niortskali) »

Tart cherries bring sweet-sour flavor to this simple salad of herbs and roasted beets. Get the recipe for Beets in Tart Cherry Sauce (Charkhlis Chogi) »

Almost any vegetable can be substituted for spinach in this vegetarian appetizer sprinkled with pomegranate seeds. In Georgia, roasted beet and green bean versions are common. Get the recipe for Spinach and Walnut Salad (Pkhali) »

Though versions of this robust meat stew are eaten throughout Georgia, the salt-cured plums, hot chiles, and fragrant fresh herbs are typical of the bold, contrasting flavors of the Kakheti region. Get the recipe for Khashlama (Veal and Sour Plum Stew) »

Filled with melted cheese and topped with a runny egg, this flatbread is best eaten hot–tear off the crust and dunk it in the well of cheese and egg. Get the recipe for Cheese and Egg Bread (Acharuli Khachapuri) »

A creamy puree of toasted walnuts adds richness and depth to this hearty kidney bean stew. Get the recipe for Amolesili Lobio »

These Georgian dumplings are traditionally made with a spiced meat filling; this cheese and herb version, once meant for religious fasting days, is now enjoyed year-round. Get the recipe for Cheese and Mint Stuffed Dumplings (Khinkali Qvelit) »

A thick, aromatic walnut sauce adds luscious body and earthy flavor to this spiced chicken dish. Get the recipe for Chicken with Walnut Sauce (Katmis Satsivi) »