First, let’s get something straight: Bar folks have a lot of feelings about martinis. One of the oldest cocktails in the canon, martinis can vary in size, ingredients, and preparation. The classic drink began with gin, stirred, and up, then went vodka, shaken, and dirty. Today, many establishments use the martini moniker regardless of ingredients, as long as it’s served in that signature V-shaped glass.

“We serve the martini in a small martini glass with a side carafe of the remainder chilled on ice,” says Mark Echeverria, CFO/COO of The Musso & Frank Grill. The old Hollywood restaurant, which opened in 1919, serves close to 58,000 martinis annually. And just like the days when Charlie Chaplin, Greta Garbo, or Gary Cooper sidled up to the bar or tucked into a booth, Echeverria and his team believe that the martinis should be “classic, and small.”

“Hopefully, gone are the days of the 12-ounce martini glass,” says Jerry Slater, co-owner of The Expat and Lark Winespace in Athens, Georgia, and the co-author, along with Sara Camp Millam of The Southern Foodways Alliance Guide to Cocktails. He’s been in the business 34 years, witnessing martini trends from the anything goes ingredients of the “funtini” to glassware you can practically swim in, but still prescribes the original format: small, strong, and with no ice.

Whatever kind of martini you prefer, you don’t need much to mix them up at home. When it comes to the best martini tools, glassware should be considered alongside stir spoons and strainers. Here are the best martini glasses to set you up for sipping success, with some guidance from those who know best.

Washability: A vintage-inspired, handblown glass might be your dream, but more than likely, it isn’t made for the dishwasher. If you are interested in frequent happy hours, then we advise looking for something a bit more sturdy that is also dishwasher safe. Speaking of washing, one of the most common places for a glass to break is the “wash line” right below the rim. A thicker rolled-glass rim is the most durable, then those with a laser-cut rim (which prevents microchips to the thinner rim during the production process). The most delicate glasses are either hand-blown, which by nature are somewhat uneven, or antiques which become even more delicate with wear and use over time.

Design: The most common variations are V-shape, Nick and Nora, or coupe. If you love experimenting with craft cocktails at home, an elegantly curved coupe or old school Nick and Nora shape will be useful for a wide variety of drinks beyond martinis. Whatever glass you choose, pay attention to its size. A larger martini glass might seem impressive or extra hospitable, but chances are it will also spill or dribble as your guest tries to drink from it. Look for a capacity of 4–6 ounces. “You put three ounces of booze in a martini and stir, so anything more than six ounces is pretty terrible,” says Slater. “There’s no ice so it gets warm.” 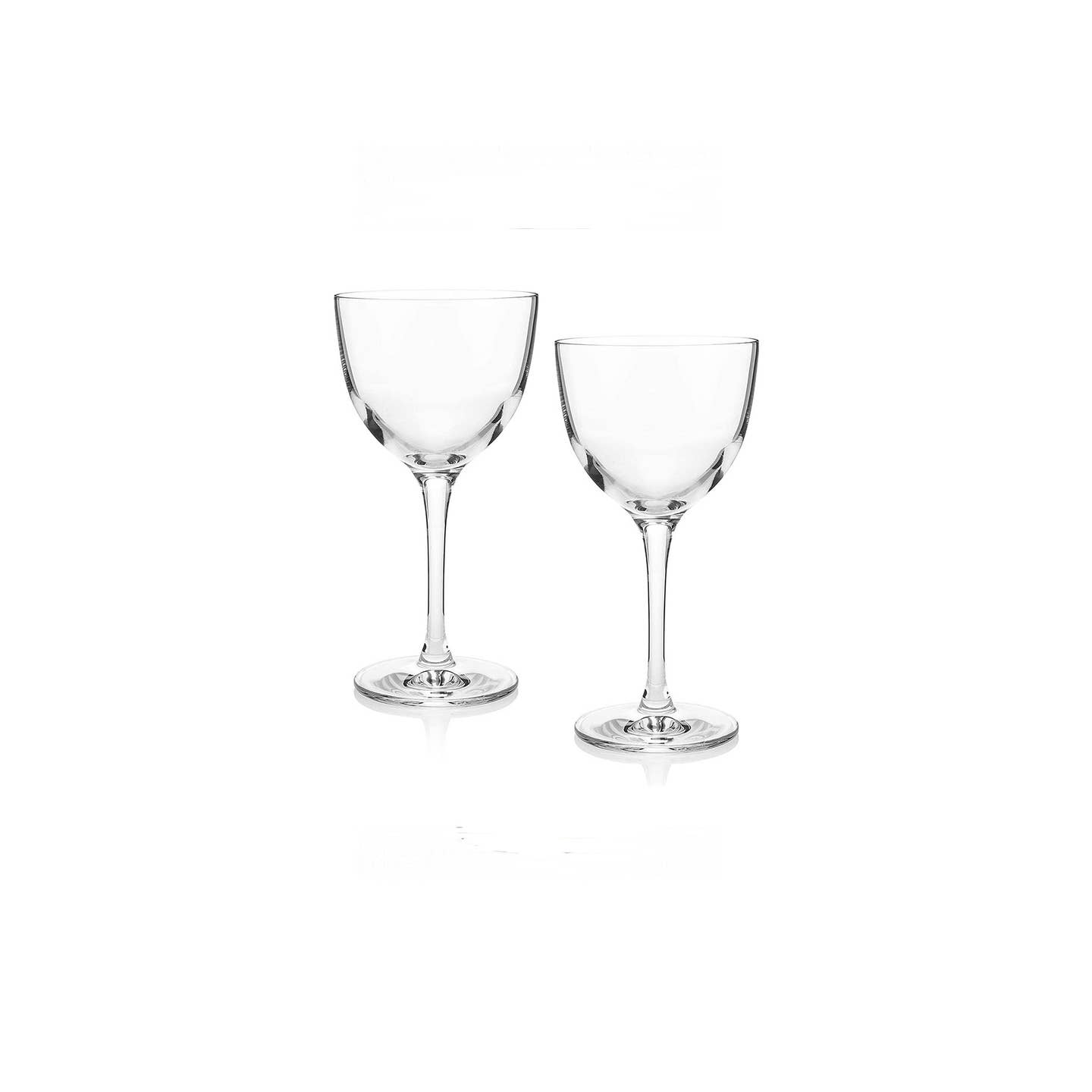 Nick and Nora Charles were the two martini-swilling leads in the Thin Man movies from the 1930s and 40s, and the glass style they popularized now bears their names. These American-made crystal glasses are sturdy enough to run through the dishwasher while still striking a pose of posh Hollywood glamour. Nick and Nora glasses are the preferred glass for many of our favorite bartenders, and this set is a little more well made and elegant than those from a standard restaurant supply company. 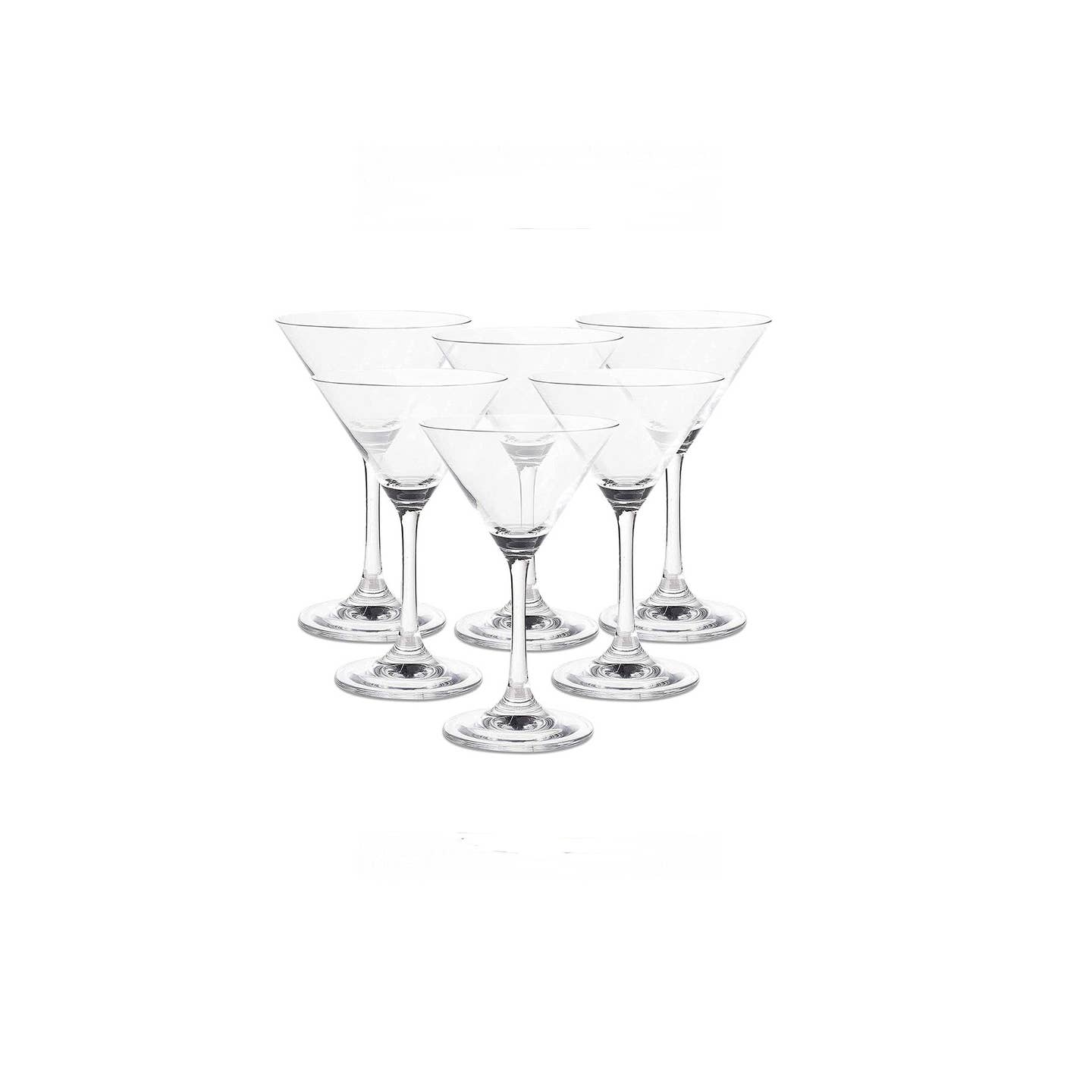 This set of six is a good deal for those looking to create martinis for more than a couple of people. The sturdy 5 ounce glasses are perfectly sized and dishwasher safe while giving off that classic Musso & Frank vibe. They’re also short enough to easily fit in a cabinet or a cart for storage, yet easy enough to grab if you’re just looking for a convenient yet appropriately-sized Martiny vessel while you fix dinner. 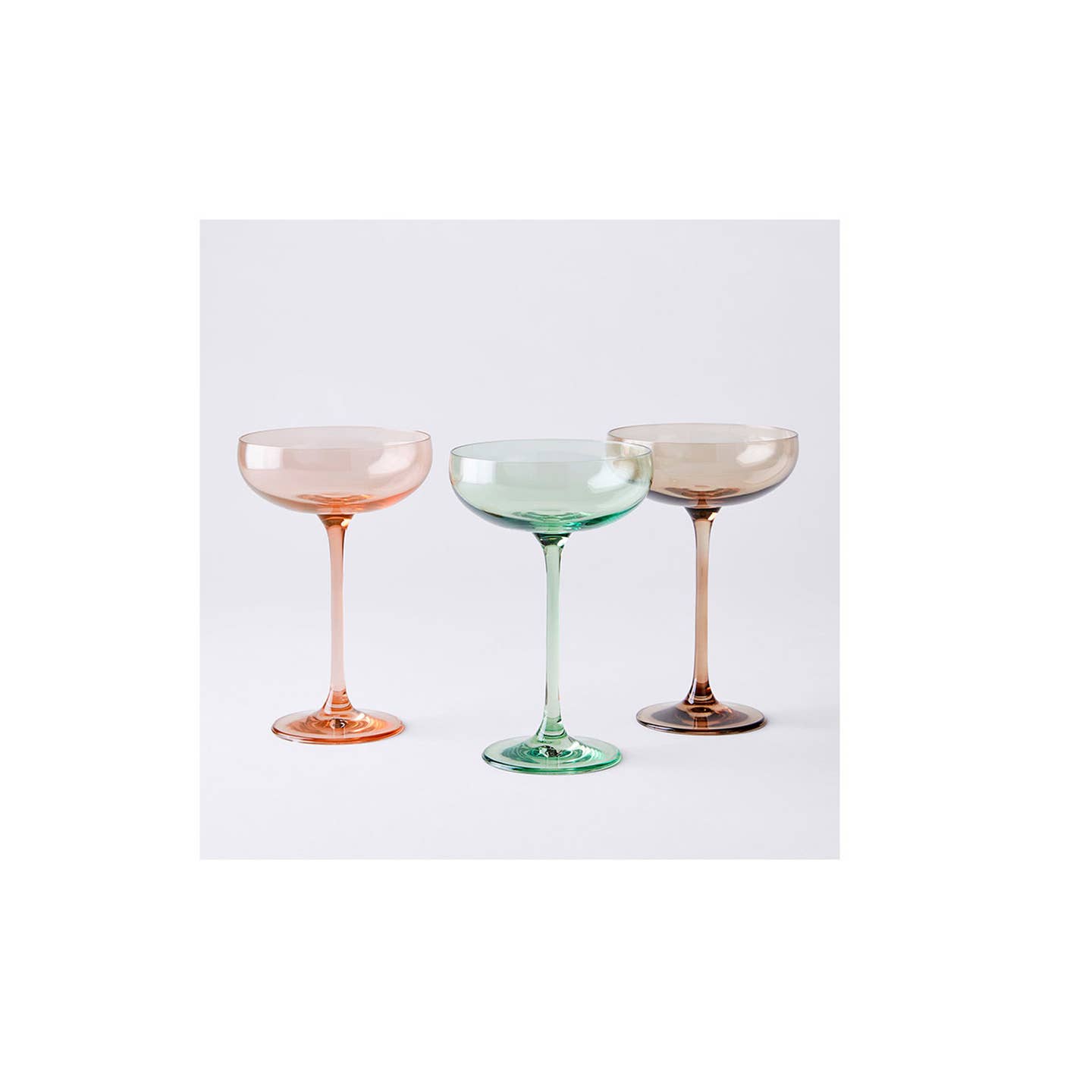 These handblown coupes from Estelle Colored Glass in Charleston, South Carolina are begging for a rose-colored glasses pun, but actually come in a rainbow of colors like cobalt blue, smoke, and mint green. Inspired by the owner’s grandmother, who loved to set an eclectic table for Sunday dinners, these stunning coupes will inspire your cocktail hour for martinis and beyond. Use them to serve champagne and other spirit-forward cocktails such as a French 75 or an Old Pal. 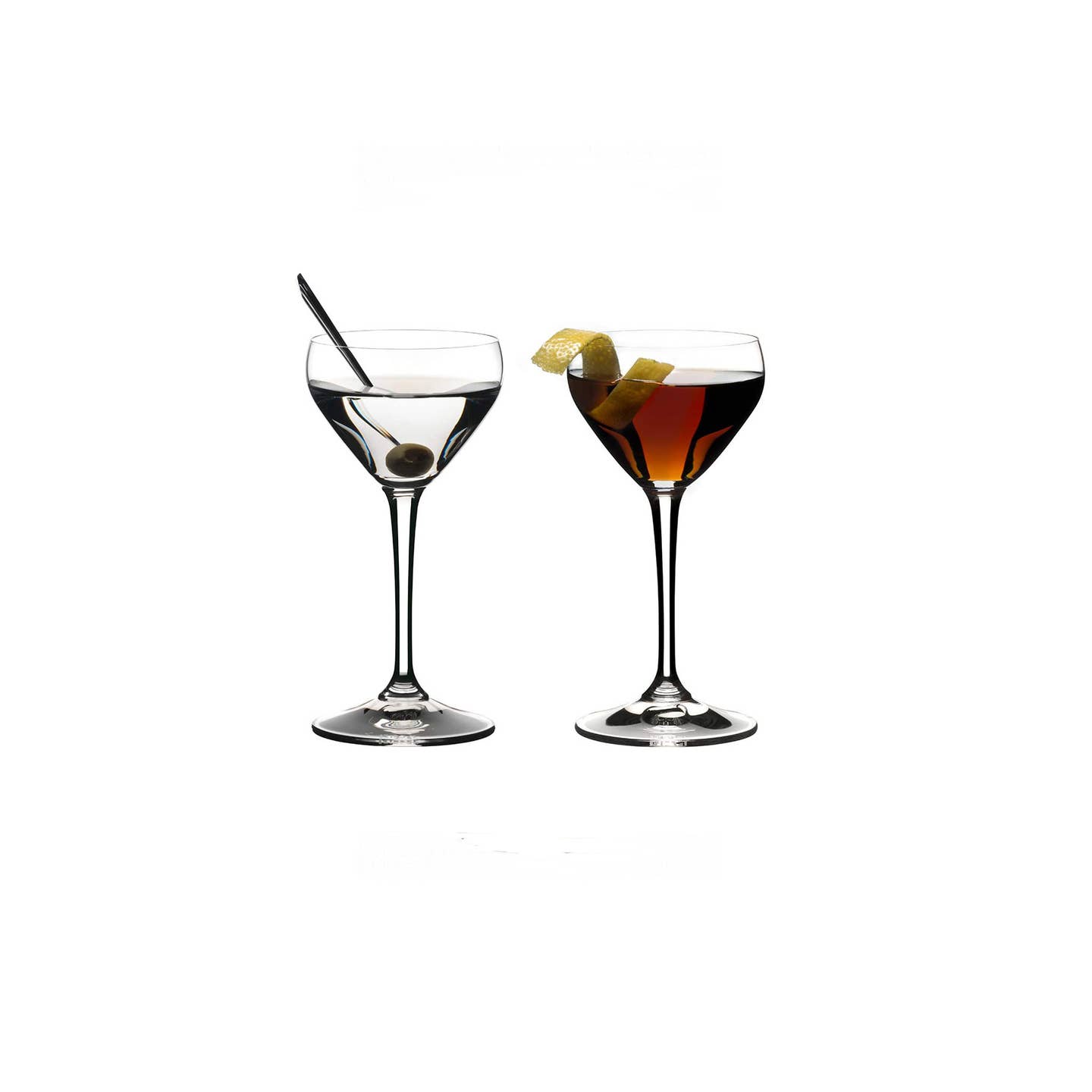 Although Miguel Buencamino of Holy City Handcraft is best known for his beautiful shots of whiskey cocktails, 2020 found him discovering a new love for the martini, including the Gibson, which sports a pickled onion. “I don’t even have a traditional [v-shape] glass—they’re kind of impractical,” he says. What he recommends instead is a 4-ounce Nick and Nora that you can fill to the wash line once you add the garnish. “And the Riedel company—the one that brought us stemless wine glasses—has a great one,” he says. Its construction cuts an elegant silhouette with a sturdy stem and fine rim, and you’ll look ready for your close up when sipping from it. Cheers to that, with the added bonus of no spillage from counter to couch. 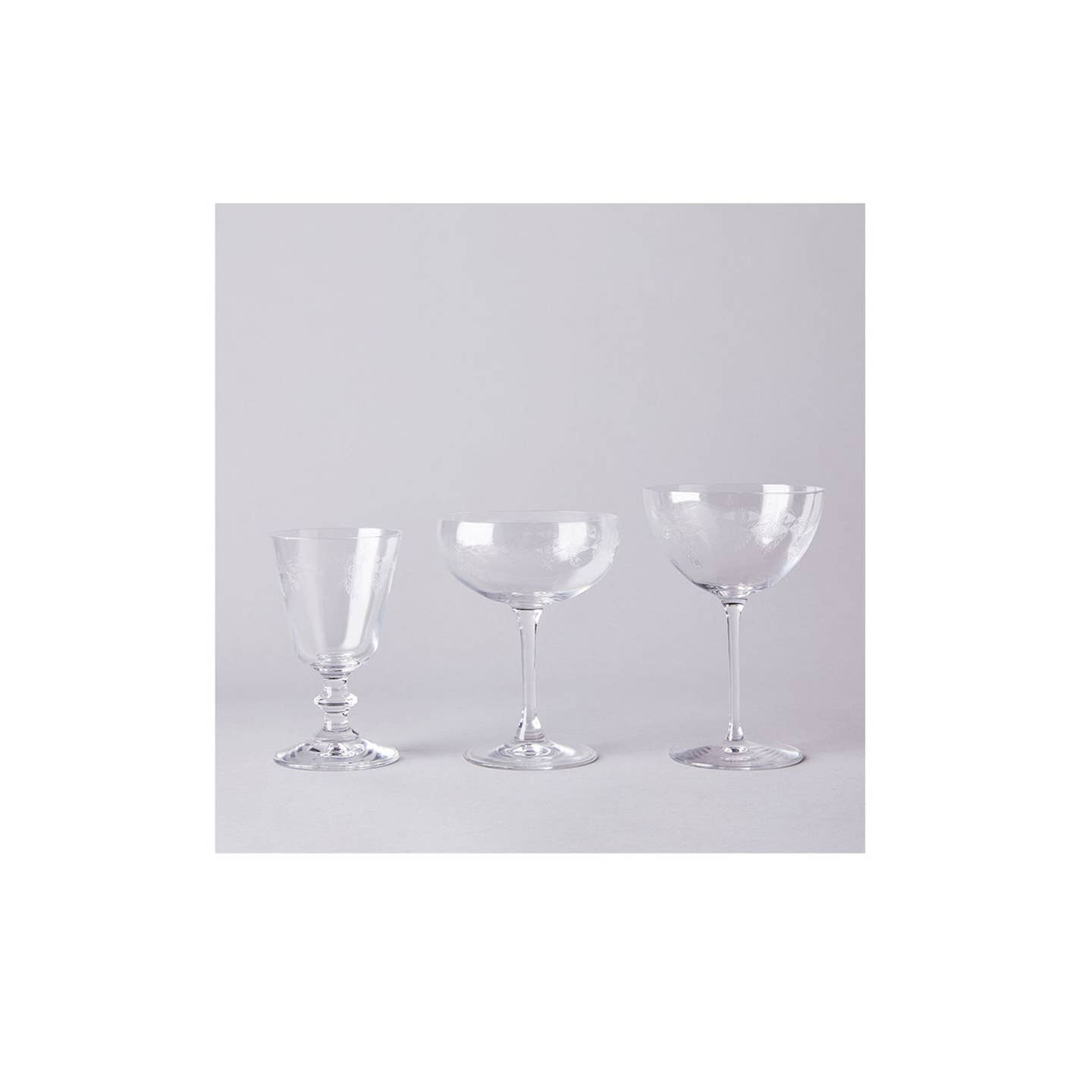 Delicate design, elegant etching, and an overall Gilded Age vibe makes these glasses over-the-top charming. Inspired by a family heirloom of Amanda Hesser, the founder of Food52, it will quickly become one in your household as well, as long as you hand-wash as recommended. A properly-made martini clocks in below its full ounce capacity, and can’t you just imagine a lemon twist bending gracefully over its rim as garnish? 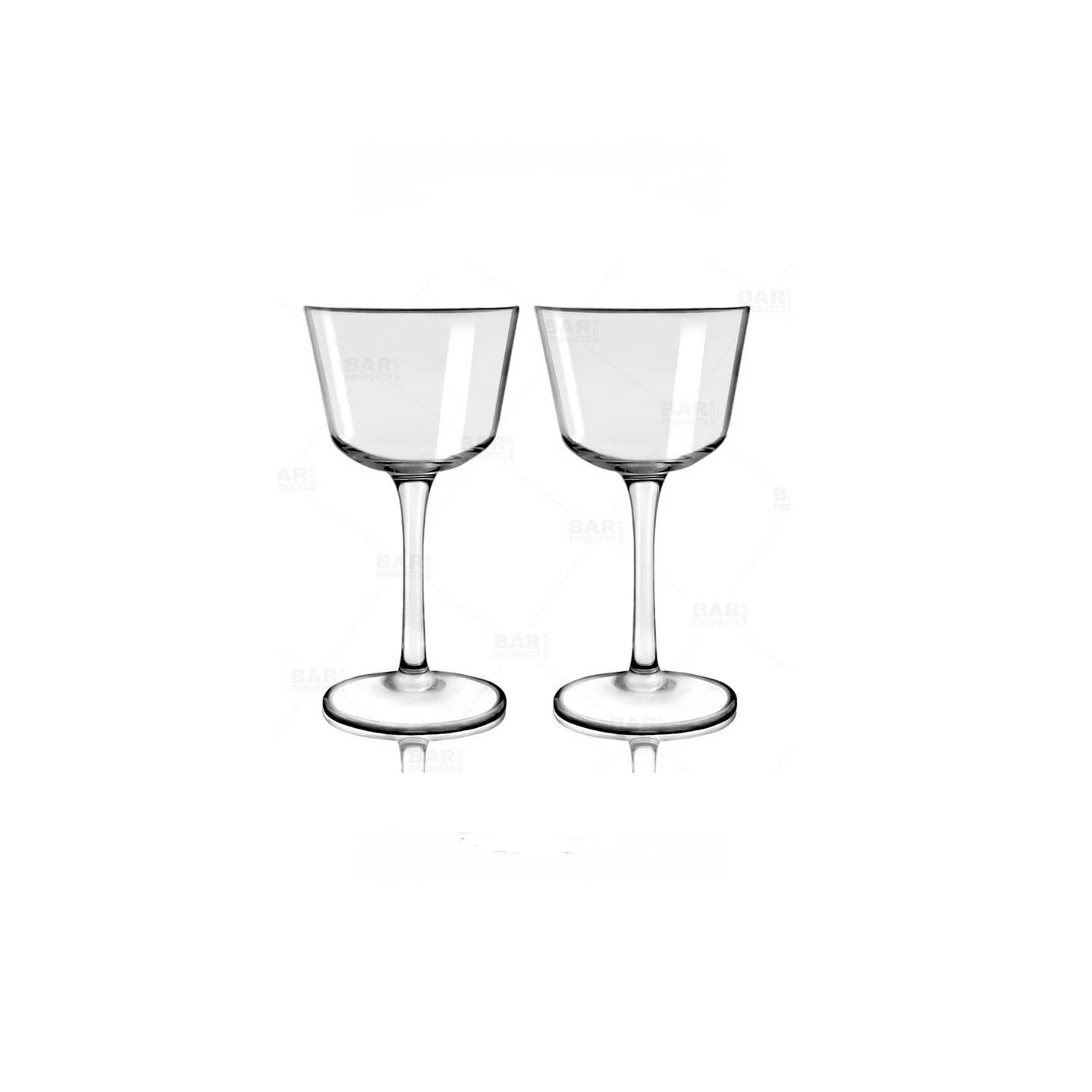 Although the volume of this glass is on the higher end for an ideal martini, it screams 1970s dive bar. It’s the kind of glass we’d hold at one of those joints with red horseshoe booths at the back and a Schlitz sign out front. “I think Greg Best might have repopularized this one, but I love it because it seems straight out of those places with the red pleather chairs,” Slater says. “It’s sturdy and a little less dainty.” Use it for a Manhattan, martini, or even a Corpse Reviver #2, if reviving is warranted.

Q: Is a martini glass the same as a cocktail glass?

In short, no. But in reality, sometimes. Bar glassware comes in a variety of styles, from highballs to coupes to snifters, and the classic v-shape martini is often included in that lineup. Although when bartending at home, there are really no rules about what glassware should be used for what cocktail, pairing a stirred, spirit-forward drink—such as a martini—in a Nick and Nora or coupe is easy and enhances the drinking experience.

Q: Why is the martini served in a martini glass?

According to drinks expert and historian Wayne Curtis for Imbibe, “The martini cocktail preceded the modern martini glass by around four decades or so—on that, most everyone agrees. The early martinis were likely served in Champagne coupes or variations thereof, as were many ‘up” drinks in the late 19th century. In the 1920s or thereabouts the angular martini glass first surfaced,” and from there, Art Deco style took over and the modern V-shape glass became ubiquitous.