The inside of my fridge looks nothing like it did before I started cooking from Tasting Georgia, by Carla Capalbo, this month's pick for SAVEUR Cookbook Club. The fruit drawer, which previously housed a few sad clementines and apples, is brimming with juicy pomegranates. Where the sundry salad stuff once lived, tousled bunches of cilantro, parsley, tarragon, dill, and mint have moved in. My perennial stash of cold beer? Currently gridlocked behind wheels of sulguni cheese, jars of Megrelian chile paste, and bottles of green plum sauce. Never mind—these days we're drinking mostly chacha and amber wine anyway.

Georgian wine is what first drew Capalbo to Georgia, but she soon found herself equally intrigued by the country's varied local cuisines, boundless hospitality, dramatic landscapes, and—as she puts it in Tasting Georgia's preface—"a way of life that has all but disappeared in many places." In a matter of months, curiosity became fascination became a book proposal, and with the aid of John Wurdeman, the larger-than-life American artist-cum-winemaker behind Pheasant's Tears, Capalbo traveled to nearly every corner of the country in search of untold stories, rare village wines, and treasured family recipes. Tasting Georgia chronicles her odyssey's findings, region by region. 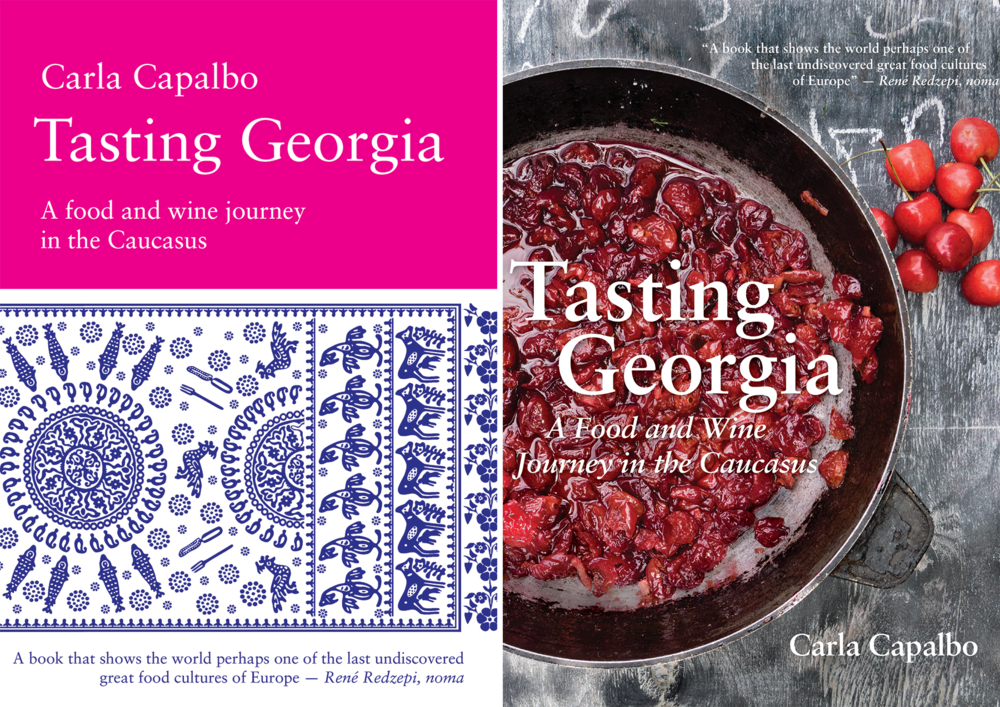 Anyone planning a trip to the Caucasus would be wise to pack Tasting Georgia for its travel tips and ear-to-the-ground restaurant recommendations, but for most readers, the book's main draw is its recipes. This month, we test-drove seven rave-worthy dishes that ran the gamut from garlicky slow-cooked beans with walnuts and spices, ultra-juicy khinkali dumplings filled with pork and beef, and fall-off-the-bone ajika-rubbed ribs.

Spiced khinkali, or pork and beef dumplings, from Tasting Georgia

Though unconventional, we liked the flavor boost we got from toasting our walnuts.

Pounded walnuts are the backbone of Georgian cuisine. They’re the mystery emulsifier in soups and stews and the punch of richness in pkhali, a family of cold vegetable spreads. Georgian walnuts are smaller, oilier, and more aromatic than the California-grown variety that’s ubiquitous stateside, so we recommend lightly toasting your walnuts to amp up their intensity. (Yes, that’s the sound of Georgian grandmothers rolling in their graves.) Just be sure your walnuts are fully cooled before mixing them into any uncooked ingredients like garlic or herbs.

Don't throw in the towel if your khinkali aren't perfect.

When one Cookbook Club member posted images of her homemade khinkali, Georgian soup dumplings, another member deadpanned, "Brave. I am avoiding khinkali." Of course, artfully wrapping homemade dough around a drippy filling is no small feat. Even in Georgia, khinkali are viewed as something of a culinary holy grail, and it's easy to be intimidated by the dextrous pleating of seasoned pros. Fret not: As long as the dumplings are properly sealed, they'll taste the same as their fancy-schmancy counterparts. Make sure to pinch extra hard at the base of each topknot, which is (necessarily) so dense and doughy that most Georgians toss it aside like pizza crust.

It's worth hunting down specialty ingredients.

We've all been there, gazing down at a mouthwatering recipe but deflating like a flat tire upon realizing that it calls for pesky, special-order ingredients. Hear us out: Little-known Georgian spices and flavorings—such as khmeli suneli, dried marigold, and blue fenugreek—are precisely what make Georgian cuisine so distinctive and enticing, so it's worth tracking them down. We recommend Bazaar Spices in Washington, D.C., a dependable purveyor with a painless online checkout.

We could all do with more fresh herbs.

Herbs aren’t a garnish or an afterthought in Georgia; they’re often the backbone of the dish. The recipe for lamb chakapuli calls for a whopping cup of fresh tarragon and an additional half-cup of cilantro. The beef and chickpea stew we tested (and devoured with crusty bread) saw handfuls of parsley, dill, and mint added at various stages of cooking. Adding such substantial quantities of fresh herbs resulted in dishes that tasted bright and alive, even if they’d been simmering on the stove for hours.

Capalbo's food isn't what you'll find in most Georgian restaurants, and that's not a bad thing.

Most of the recipes included in this book were culled from home cooks, which means the dishes have more personality than what you’ll commonly find in Georgian restaurants. Capalbo’s meat-filled khinkali are fragrant with cilantro, caraway, cumin, coriander, and summer savory—flavors that elevate the dish but might be scoffed at by Georgian purists. (In the Mother Country, restaurant renditions of khinkali tend to be straightforwardly meaty without much added spice.) As insatiable recipe tweakers ourselves, we applaud the book’s open-minded approach to traditional dishes—it’s all the better for it.