From Thai pandan jellies to Japanese street-style milk toast, explore a diverse world of sweetness with our favorite Asian desserts 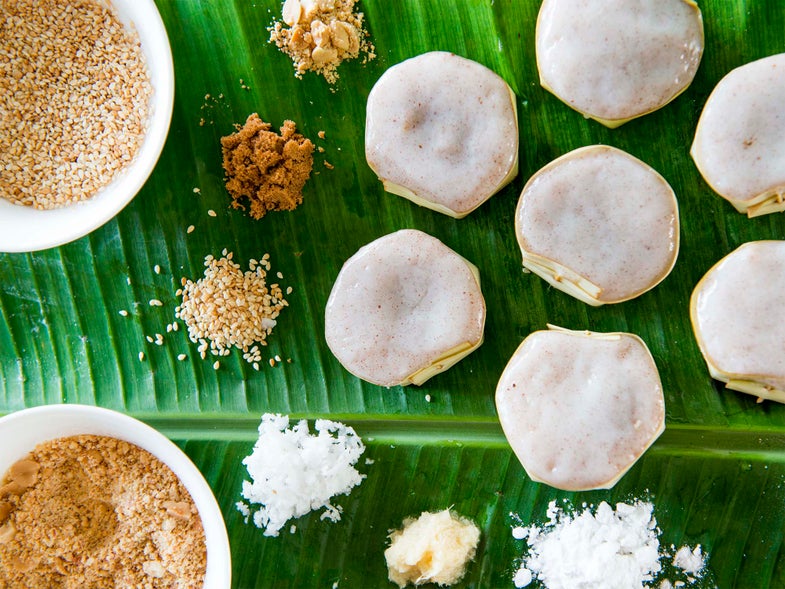 If you’ve mastered classic American desserts and French desserts, perhaps it’s time to add some new flavors into your proverbial cake mix. From China to Japan and Thailand, traditional Asian desserts are as varied as the cultures and peoples from which they come. With the former, a diversity of Chinese cultures has yielded a wealth of ingredients used in desserts such as mochi, glutinous rice, and red beans. In the canon of Thai sweets, find a complex array of confectionary building blocks that range from pandan to cassava root and coconut (pro tip: here’s how to crack open a coconut to make your own homemade coconut milk).

It would be overwhelming to try to master such a vast collection of cuisines, but we’ve rounded out some of our favorites to help you get a taste. From Thailand’s khanom chan to a Vietnamese ca phe-inspired ice cream and a Japanese street-style milk bread, here are some of the best Asian dessert recipes to try right now. 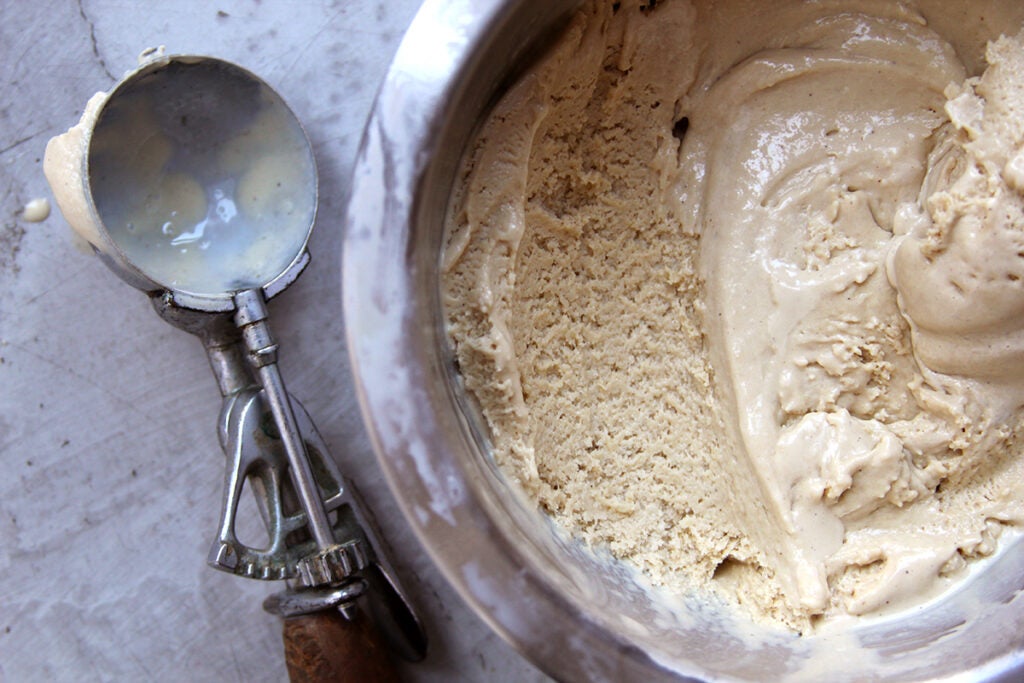 Sweetened condensed milk and a touch of spice set this caffeinated treat apart from other coffee ice creams. Get the recipe for Vietnamese Coffee Ice Cream » 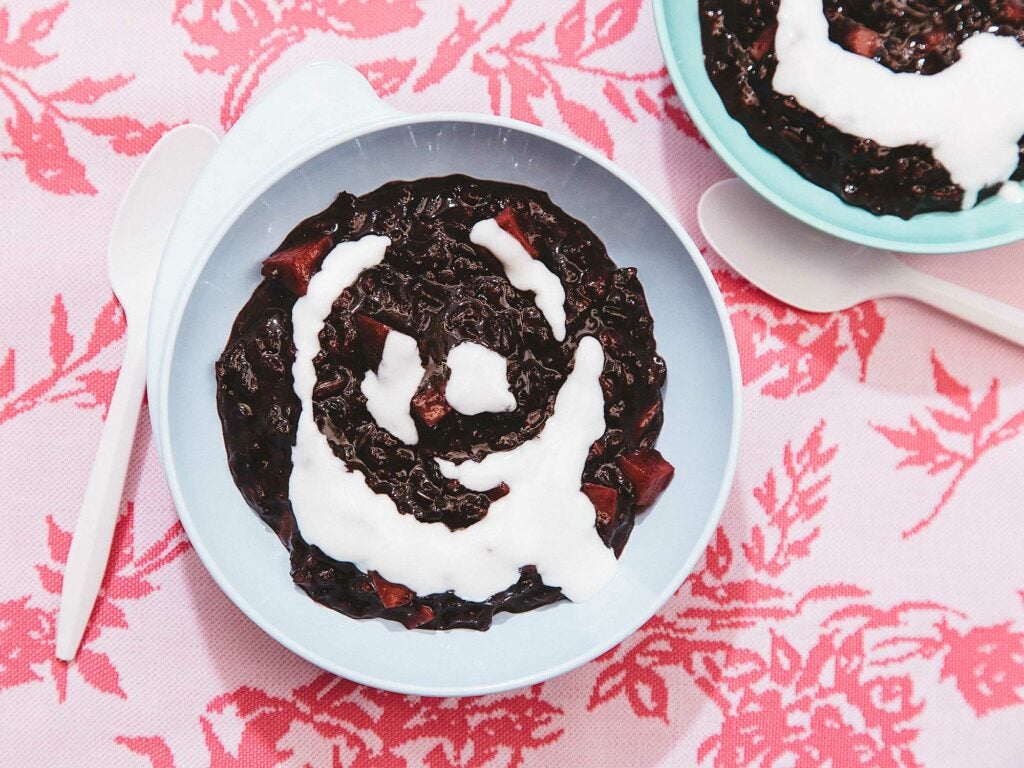 Black sticky rice, which like wild rice is unhulled, makes a rustic rice pudding loaded with far more flavor and texture than usual. This version from chef Peerasri Montreeprasat at Sugar Club, a Thai grocery and cafe in New York, adds in cubes of nutty taro and is sweetened with palm sugar.

Plan in advance: The sticky rice needs to soak overnight, and the pudding and coconut cream topping are best served chilled. For the richest topping, which should have a notably salty kick to balance the pudding, chill the coconut milk can in the refrigerator ahead of time. That thick layer of coconut cream that sets at the top of the can is what you’re after.

Some Thai cooks, Montreeprasat included, soak the taro for this dessert in lime mineral water to help the root retain its shape and crisp texture even when fully cooked. The extra step makes a slight difference, but one we think you can skip if you take care to not overcook the taro. Get the recipe for Thai Black Sticky Rice Pudding with Coconut Cream » 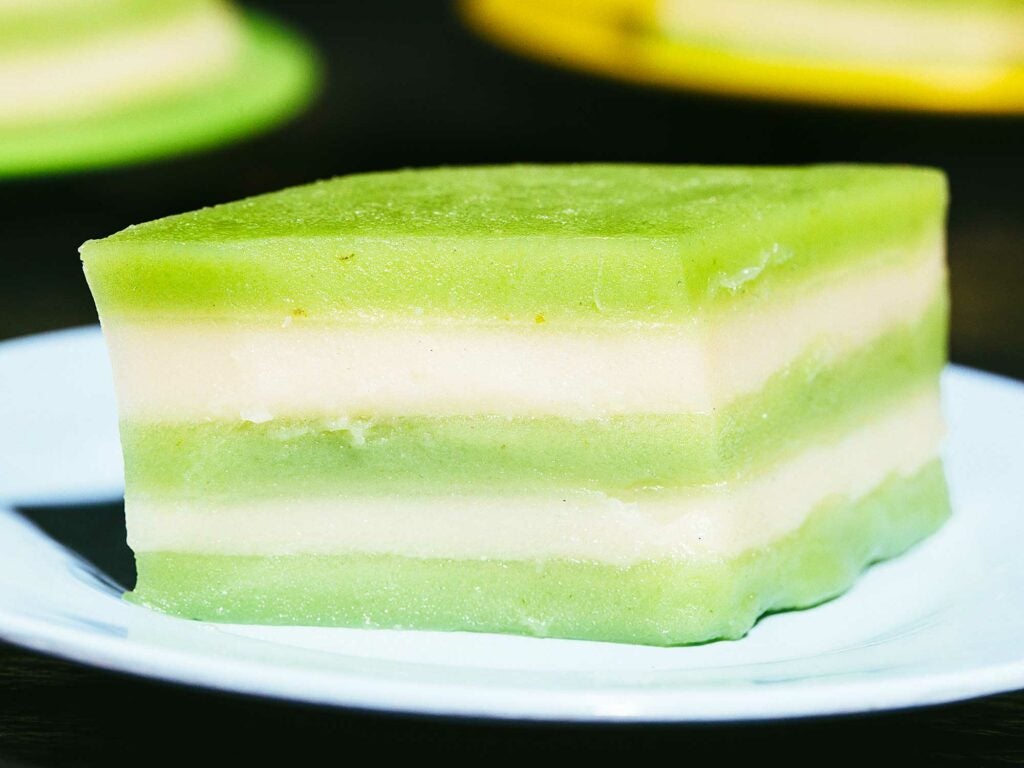 Get the recipe for Thai Steamed Coconut-Pandan Cake (Khanom Chan) »

Think of these silky, chewy, coconutty gummies as richer, more flavorful Jello jigglers, made with a steamed batter of coconut milk with sticky rice flour and tapioca and arrowroot starches. It’s a labor of love: to form the neat layers, you have to let the previous layer steam enough until set but still a little tacky before adding the next. The cake also benefits enormously from making your own pandan extract; though you can buy pre-made extract in Thai groceries, it won’t compare to the unique sweet herbal fragrance of the fresh leaves. (You can buy fresh or frozen pandan leaves online or in well-stocked Thai groceries.)

Peerasri Montreeprasat, the chef at Sugar Club, a Thai grocery and cafe in New York, stresses the importance of wiping down the lid of the steamer during cooking to avoid any water dripping onto the top of the cake (at Sugar Club she does this every few minutes). And about that food coloring: It’s optional, but it’s the best way to keep the green layer of the cake looking bright, not olive drab. Get the recipe for Thai Steamed Coconut-Pandan Cake (Khanom Chan) » 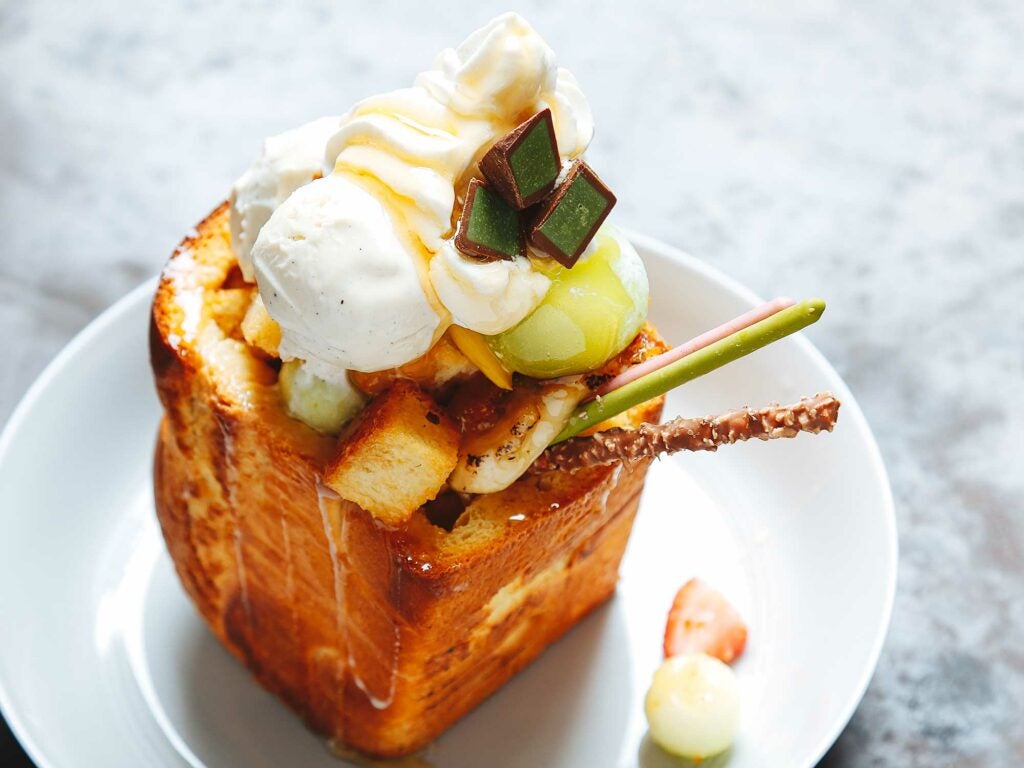 This over-the-top architectural dessert (also known as brick toast) is popular in tea shops and casual restaurants in Japan, Taiwan, and Singapore. The dish is meant to be shared with a friend (or three) and the more color, texture, and height the better, so don’t skimp on the garnishes. Cookies, seasonal fruit, and candy are typical ingredients, but sprinkles, nuts, and flavored syrups are not unheard of. Get the recipe for Shibuya Honey Toast » 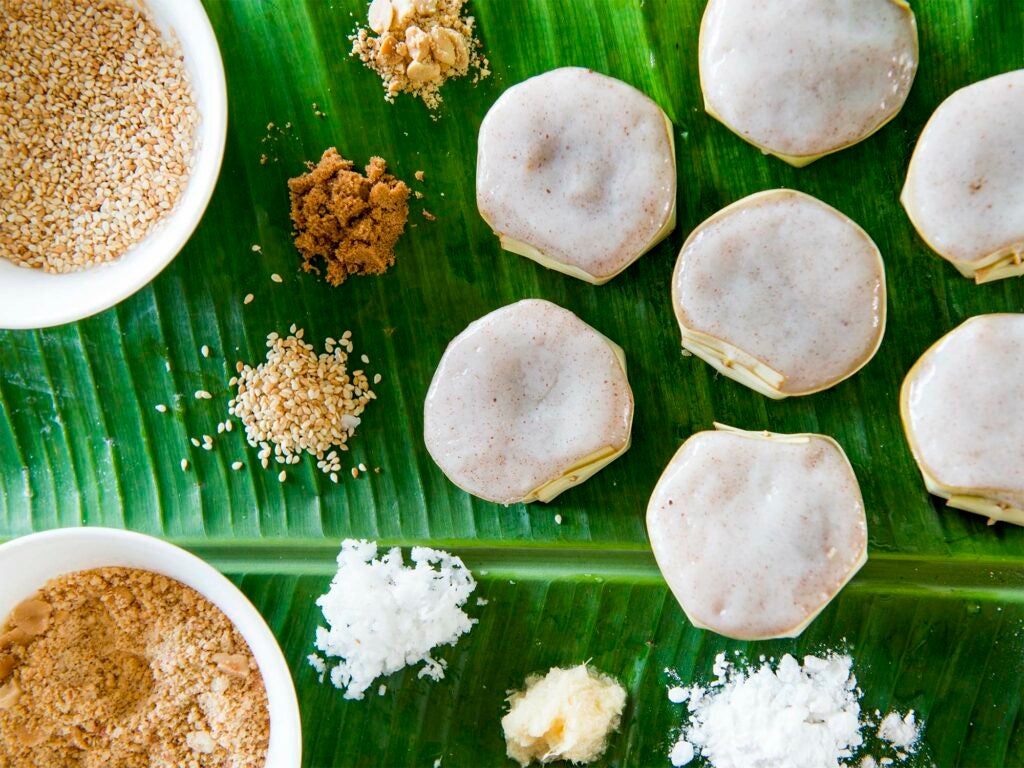 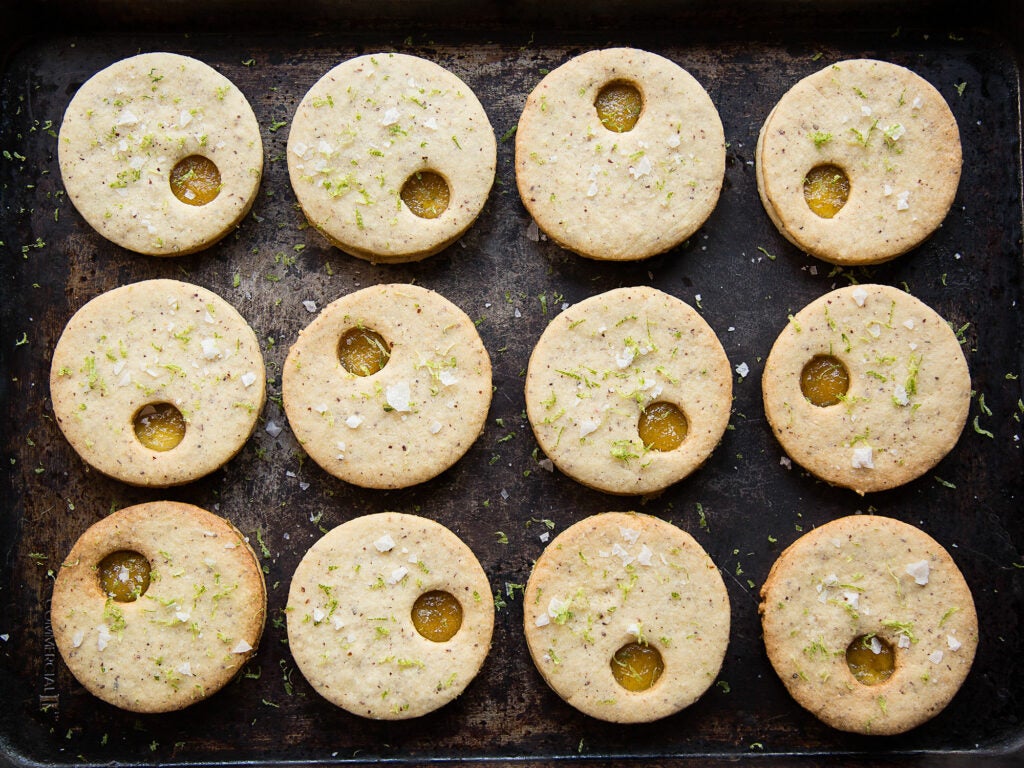 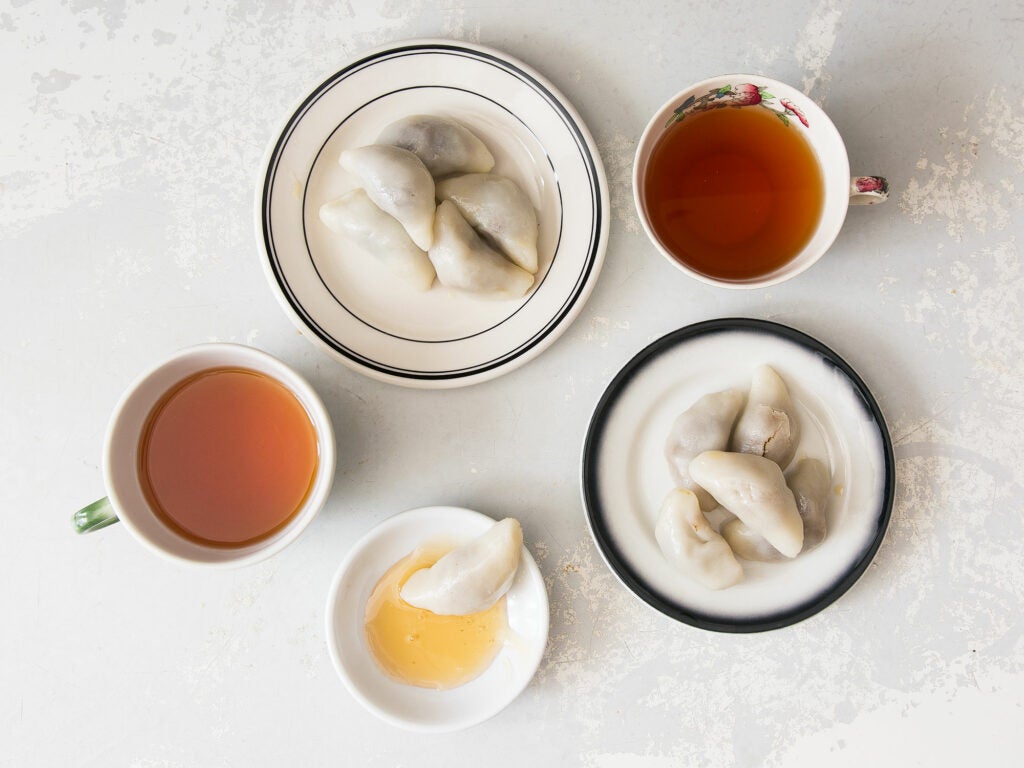 Korean rice cakes, known as songpyeon, are half moon-shaped dumplings that are stuffed with fillings like sweet potatoes, chestnuts, red beans, or nuts, and then steamed and served with honey. Get the recipe for Korean Rice Cake » 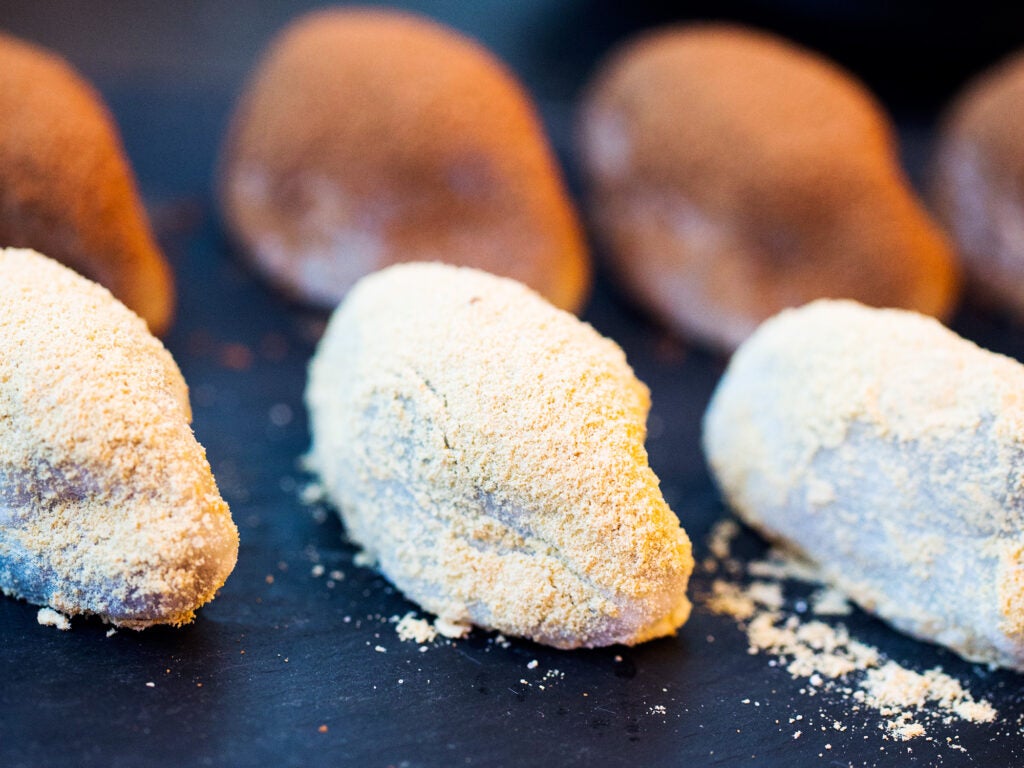 For this dessert, from cookbook author Hiroko Shimbo, adzuki bean paste is wrapped in an extremely tender, sticky rice dough called gyūhi. The toasted green soybean flour that is dusted over the sweet is reminiscent of the revered bird, shaded in greens. This recipe first appeared with the 2015 SAVEUR 100 item Eat Beans and Rice for Dessert. Get the recipe for Hiroko Shimbos Uguisi Mochi » 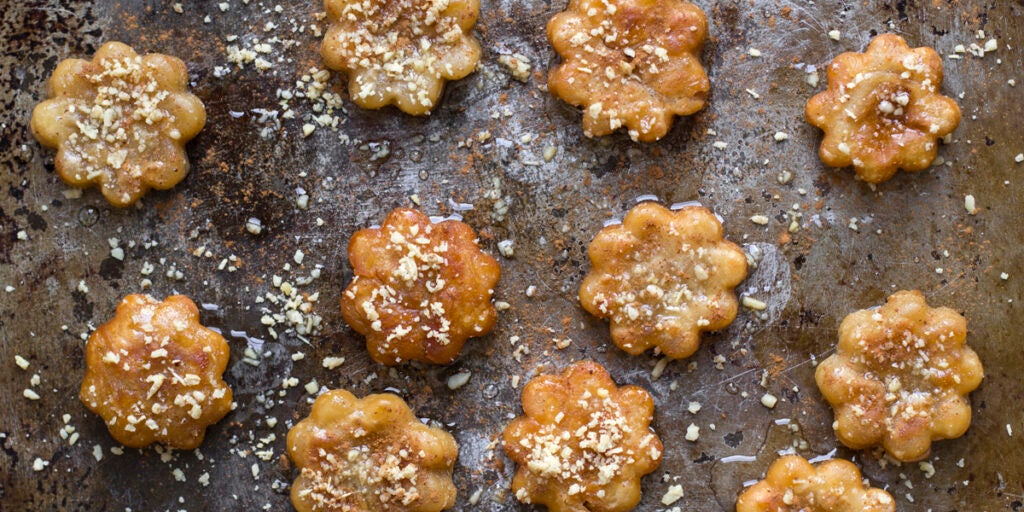