Split-Base Cocktails Take Your Favorite Bottles to the Next Level

Why stop at just one spirit? 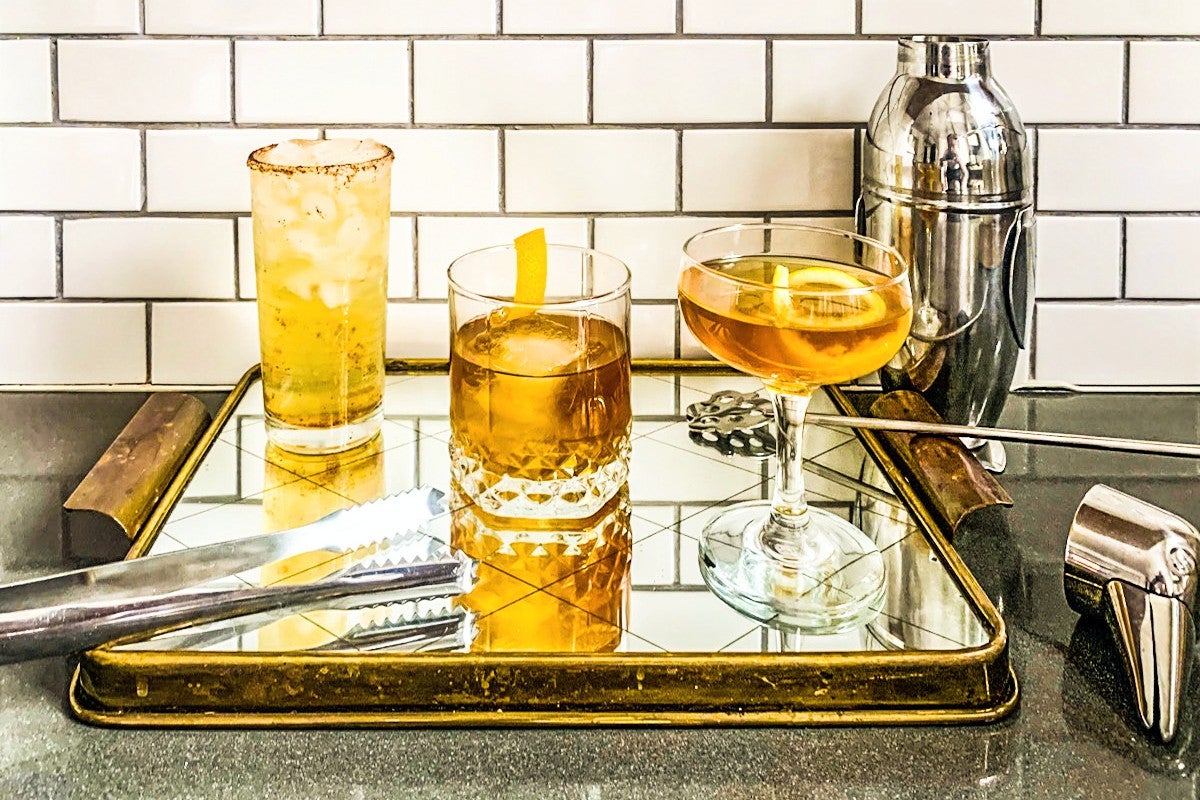 Those acquainted with my sipping habits know that I tend to keep it simple. Espresso, no sugar. Sparkling water or bubbly wine. A beer now and then. Spirits, I typically enjoy neat. And when I do decide to mix a cocktail at home, I always keep it straightforward.

This is where “split base” cocktails come in. This category of drink literally “splits” the base spirit—the main liquor component—between two (or more) ingredients. It may sound odd or potentially muddy, but the addition of a second liquor can enhance certain flavors in ways that non-alcoholic mixers simply cannot. Splitting the base is a simple, no-fuss way to take at-home cocktails to the next level.

Back in the 18th century, when communal (often fruit-forward) punches reigned, it was common for brandy to be combined with one or more other spirits. As time went on, punch gave way to single-serve cocktails, and bartenders at the turn of the century began cutting brandy with liqueurs or amaro in order to create rich, spirit-forward digestifs like the Stinger, made from mixing crème de menthe and brandy.

But by the 1920s, patrons in European cities were thirsty for more refreshing beverages. Citrus came back into vogue, and while bartenders continued to pour brandy-based cocktails, gin grew in popularity and cognac lost a bit of ground. Drinks combining the three—like sidecar riffs, between the sheets, and the loud speaker—gave bartenders a way to continue offering familiar builds, albeit with a lighter and juicier touch.

Following Prohibition, these composed cocktails—and split-base drinks in general—fell out of fashion. American consumers, having become accustomed to mixing simple drinks at home, were no longer as interested in complex beverages. Vodka, via the Bond martini, began to largely dominate the mid-century bar scene.

However, recent decades have seen a resurgence of craft bartenders reimagining the split-base drink, flinging the doors wide open for a plethora of new flavors and unlikely pairings to emerge. In 2005, at New York City’s groundbreaking bar Milk and Honey, bartender Sam Ross created the penicillin, a combination of both blended and single-malt scotch, shaken with honey, ginger, and lemon. Ross used a split-base approach to make a heavily peated scotch more appealing and accessible to his guests—inspiring other bartenders to play around with using more than one bottle in their cocktails.

“Around the time that we came up with the penicillin at Milk and Honey, the majority of split-base cocktails we served were rye and applejack, or cognac and applejack, based on classic recipes calling for those bottles,” explained Ross. “The idea with the penicillin was to get the flavor of Compass Box Peat Monster into a cocktail, but more as an accent. Using the whiskey sour as a point of departure made it possible for us to accomplish that.”

Ross goes on to point out that by using a classic cocktail as the base concept and adapting it to include a smaller amount of a more aggressive spirit, the notion of what constitutes a split-base cocktail evolved from a straightforward one-to-one ratio to any mixed drink using more than one spirit. He cites Phil Ward’s Oaxacan Old Fashioned, which Ward created at Death & Co., as another example.

“It was at this point that bartenders begin to see the split base not only as a way to make a classic more interesting, but as a way to put a bold or unfamiliar spirit into a cocktail without overwhelming the guests,” said Ross. That could mean starting with a simple drink build (an old fashioned, a Negroni, or a Collins, for instance), then picking out an edgier spirit to incorporate into the recipe—be it a few dashes or a full ounce, depending on how bold you want to go.

Around the same time, Jillian Vose (now beverage director at The Dead Rabbit) and others at Death & Co. began making more elaborate plays in the split-base genre. (To this day, the bar’s mixologists regularly deploy up to three to four spirits in a given cocktail.) “If you think of each spirit like a flavor, then it only makes sense that you can use more than one to pull out the elements you want to highlight in the non-alcoholic ingredients,” Vose explained.

To build confidence in making split-base cocktails at home, taste as many spirits as you can manage to better understand the bottles you have at home and the categories they fall under.  This does not need to break the bank or require you to invest in hundreds of bottles. Subscription services such as Flaviar allow customers to select tasting kits and samples online. If you have a reputable bottle shop near you, there’s a good chance it offers samples. And of course, your local bartender can also be a wealth of knowledge.

Prior to opening the bar at Glady’s, I learned more about split-base cocktails while researching classic tiki recipes for the menu, and later, for my book. I listened to the old adage from Don The Beachcomber, who is considered the father of tiki culture: “What one rum can do, three can do better.” After experimenting with different spirit categories, the “a-ha” moment came when I mixed mezcal with rhum agricole to create Song of The Siren, my own edgy yet true-to-form mai tai riff.

On paper, the ingredients don’t appear to belong together, as there are no precedents for the combination among classic cocktails; many people consider Mezcal to be smoky and rum to be sweet. But in the right pairing, the two can produce a drink that is pungent and refreshing yet retains an earthy element, merging beautifully on the palate.

Are you ready for a walk on the wild side? Of course you are! Split-base cocktails are a wonderful opportunity to open up the bottles you may not have touched in a while—offering new ways to enjoy old favorites.

These are a few of my favorite easy-to-make split-base drinks, from both vintage and contemporary sources.

Crisp and Bracing: Between The Sheets, The Throwback that Deserves a Comeback 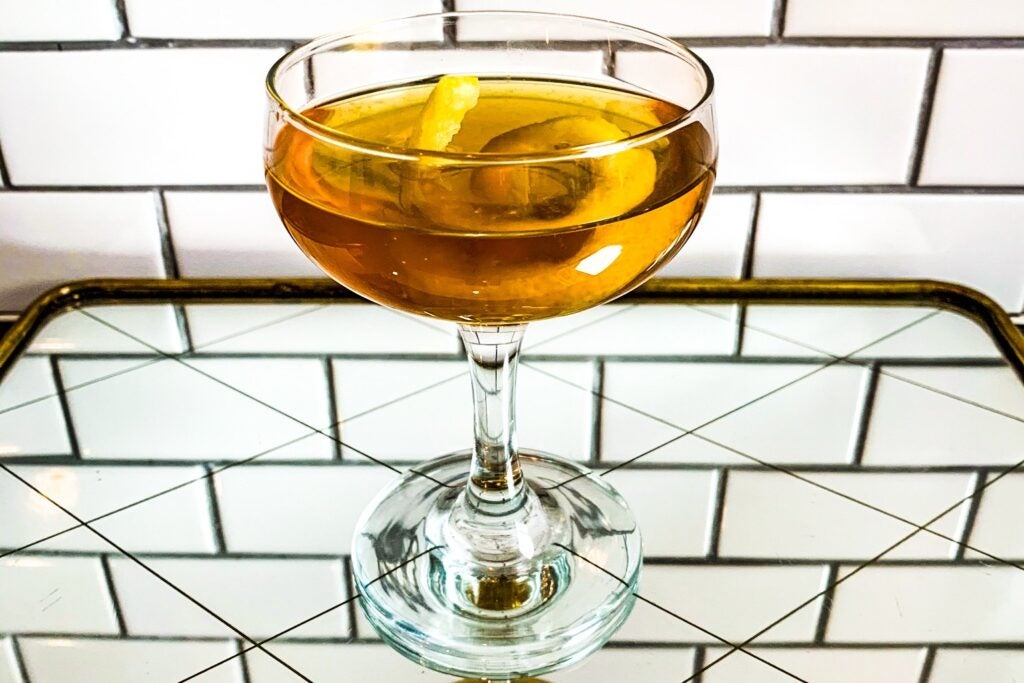 Get the recipe > Photography by Thomas Payne

I came upon this hot little number when looking for ideas for tropical brandy-based cocktails, and was delighted at how easy it was to make and enjoy.  This cocktail is essentially a cross between a Daiquiri and a Sidecar, and fans of either drink will enjoy them for different reasons. The daiquiri lover will enjoy the floral and fruit notes that emerge.  Fans of sidecars will appreciate the fun and irreverent air that rum brings to the table. If you want to push the idea further, consider using pisco and an aged rum to introduce even more adventurous flair. This is an easy daytime or brunch drink, and it’s also the perfect accompaniment when you’re making moves in the kitchen.

The Fruity and Tropical, Modern and Edgy Bullring: An Agave-based Penicillin Riff 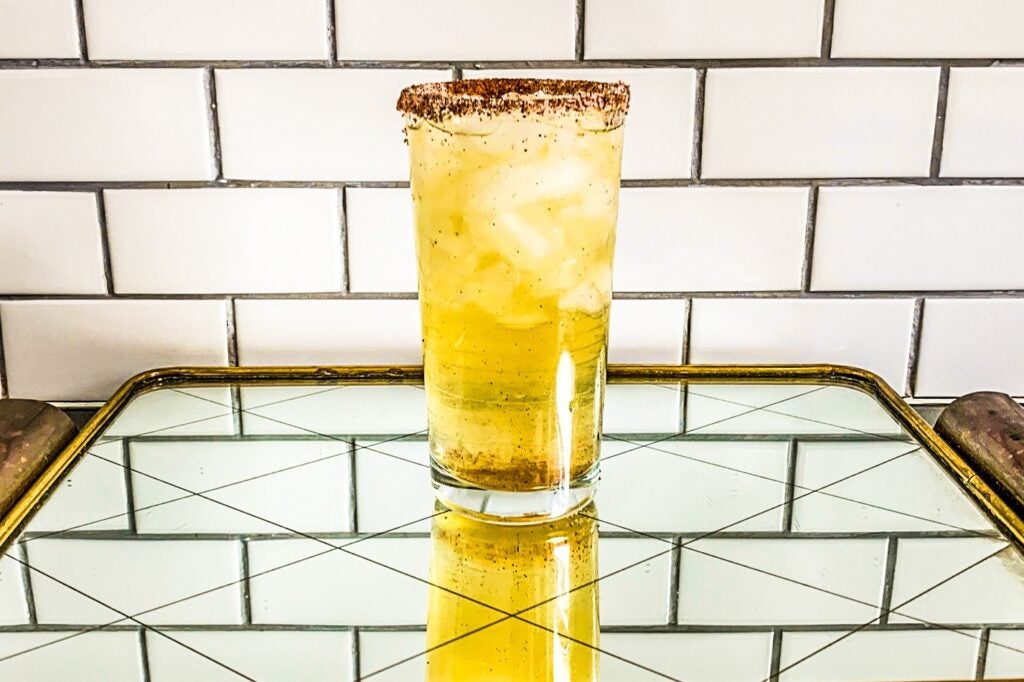 Get the recipe > Photography by Thomas Payne

I love to slip mezcal into a drink to put a fresh take on a classic. The Bullring is inspired by Trader Vic’s 1970’s version of the matador, which introduces pineapple for a tropical flair. I use two agave spirits to give heft to an otherwise light and straightforward drink. I also replace the pineapple juice with slightly spicy tepache, a pineapple-based fermented home brew that is easy to make and helps soften and tame the mezcal. If you love margaritas and want to try a cocktail that is similarly simple yet offers a fresh take, this one is for you. As a bonus, this drink is easy to scale up to a punch bowl serving six to eight. Simply scale the recipe by ten and decant into a bottle or pour it into a bowl, placing it over a big block of ice to keep it cool.

Boozy and Stirred, Soft and Silky-Smooth: The Cavendish Is A Play on The French Connection

The Cavendish combines a few of my favorite things—rum, brandy, and banana—to create a tropical-style old fashioned.  The French element comes courtesy of pairing the brandy with an aged rhum agricole, a Martinician style of rum that derives from a similar production process as cognac. Here, the almond notes of Amaretto are replaced by banana, which is a tad duskier and less sweet. To balance the spirits and banana liqueur, I add two dashes of aromatic bitters. While Angostura is great here, I encourage you to play around with other styles that lean heavily on pimento or spice, to achieve a “baked banana” effect in the aftertaste.

Shannon Mustipher is a rum expert, cocktail consultant, and the author of TIKI: Modern Tropical Cocktails (Rizzoli, 2019). When she is not enjoying mixed drinks and sparkling wine, she is likely cooking and collecting “too many books.”