The Mothers of All French Sauces

Six foundational recipes at the heart of Gallic cuisine. 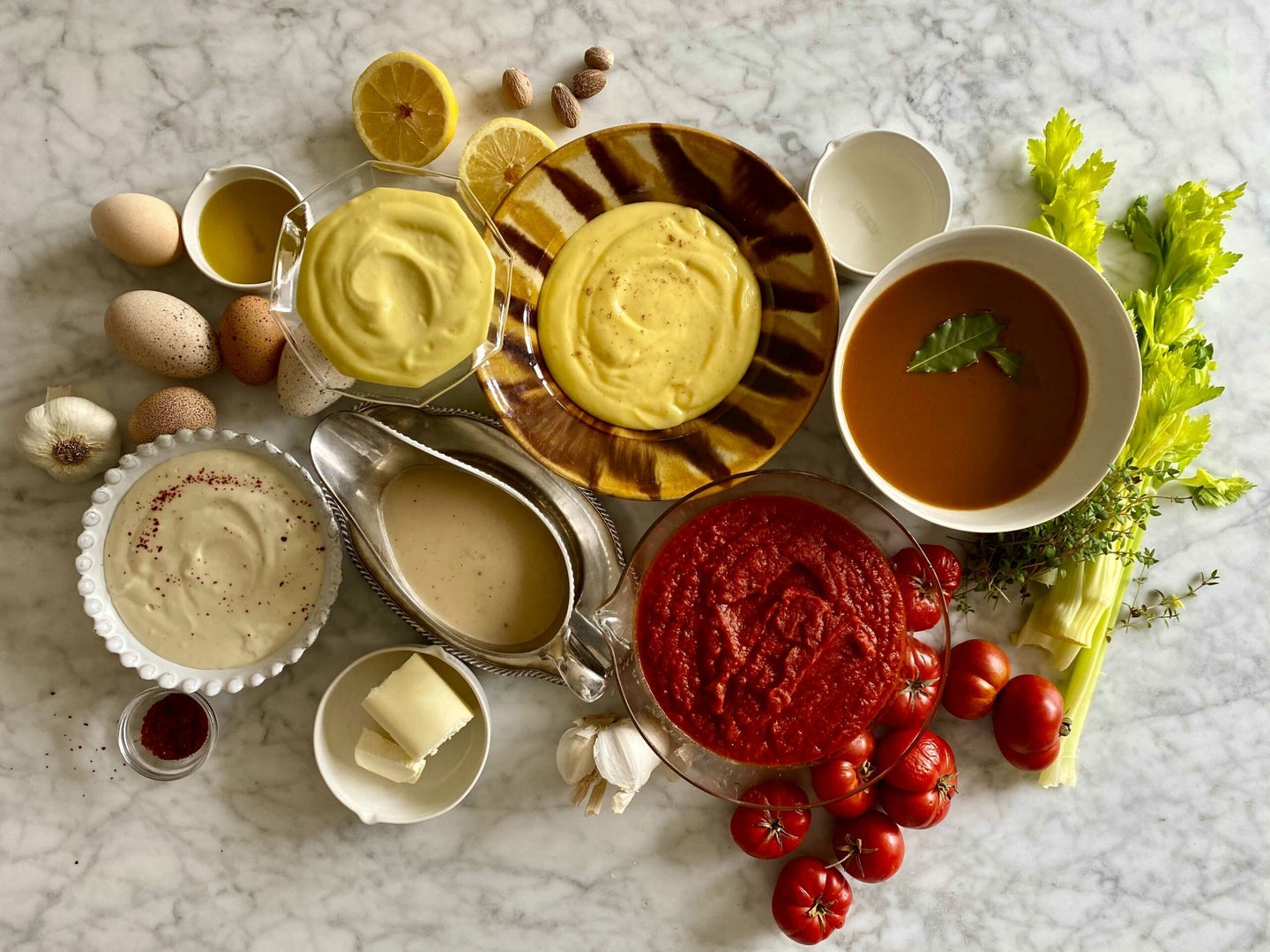 The French Mother Sauces make it possible to execute the entirety of traditional French cooking and access much of the Francophone food diaspora as well. Kate Berry
SHARE

“I tried to dive into the pan, headfirst, to taste it with my finger,” says chef Hélène Darroze, recalling the moment when, as a little girl, she was being held by her grandmother, Charlotte, who whisked the Béchamel on the stove with her free arm. “I would have walked to Lourdes for the simple pleasure of licking the bottom of the pan or of eating the crust off a gratin made with this simple, creamy sauce.” Darroze started refining her taste in the kitchen of her family’s restaurant in southwestern France, and is now the fourth generation to wear chef’s whites.

Béchamel is the mother sauce most of us learn first. The French call them les sauces mères—bases that have simmered over centuries, changing in character and execution with the arrival of ingredients—peppers, nutmeg, tomatoes—from neighboring royal courts and global trade routes. The five modern mother sauces were codified in A Guide to Modern Cookery, an abridged 1907 English-language translation of the original Le guide culinaire by Georges Auguste Escoffier, the chef and writer famed for updating his country’s culinary canon. To the original four sauces (Velouté, Béchamel, Allemande, and Espagnole) enshrined by his predecessor, royal chef Marie-Antoine Carême a century earlier, Escoffier added Hollandaise and Sauce Tomate, and reclassified Allemande. (Mayonnaise, one of his essential cold sauces, is now considered the sixth mother.) Once mastered, the secondary sauces (known as “daughters”) are only a few ingredients away, making it possible to execute the entirety of traditional French cooking and access much of the Francophone food diaspora as well. With colonization, the mother sauces made their way into other cuisines, from Viet-French Sốt Mayonnaise to Creole Sauce Piquant in Haiti and New Orleans, underlining the complex influence of an Old World culinary power.

Until recently, those adhering to the ancient regime rarely acknowledged the cultural significance of “la cuisine grand-mère”—home cooking—or elevated women to the upper echelons of gastronomy. Slowly, that has begun to change. As chef of her eponymous restaurant at The Connaught in London, Darroze is one of only three French women presently awarded three Michelin stars. (The others are Dominique Crenn and Anne-Sophie Pic.) She also has a pair of Basque-influenced restaurants in Paris, and has been inspired to introduce global flavors to her menus by her two adopted daughters, both born in Vietnam. But Darroze continues to honor her grandmother by preparing memorable gratins bubbling with Mornay sauce, a Béchamel daughter enhanced by Brebis, a sheep’s milk cheese from the Pyrénées.

Along with Darroze’s creamy recipe for her childhood favorite, consider these mother sauces as building blocks for so many dishes we adore, whether drizzled on poached eggs for a showy brunch or baked into humble mac-and-cheese casserole for a summer picnic.

Béchamel is the mother sauce most cooks learn first: A simple white roux of flour and butter, whisked with milk or cream, then simmered until thickened. Because it’s so versatile, Béchamel easily crosses borders, appearing in recipes for a basic croque monsieur, moussaka, lasagna al forno, and chicken fried steak smothered with white gravy. This is the base for daughter sauces such as onion-infused Soubise or cheesy Mornay, which chef Darroze uses to assemble her creamy vegetable gratins.

Velouté means “velvety” in French, and is the more complex sister of Béchamel. The recipe begins with a flour and butter roux that is cooked until slightly “blonde” in color, then blended with light stock instead of milk. Traditionally, this liquid was made with unroasted veal bones, but Escoffier also recommended versions with poultry or clear fish fumet. Sauce Velouté is often used as a base for soups such as this creamy chestnut potage. With the addition of lemon, egg yolks, and heavy cream, it’s also the base for a daughter sauce called Allemande or Parisienne, while adding shallots and white wine creates Sauce Bercy.

This eggy mother sauce is the star of brunch menus the world over, and the base for zippier adaptations like sauce béarnaise. Kate Berry

Hollandaise Sauce is an egg emulsion—the glorious liason of butter, vinegar or lemon juice, and egg yolks that appears most often atop eggs Benedict. Also luscious drizzled over asparagus or poached salmon, it’s the base for equally beloved daughter sauce Béarnaise, in which we love to dip french fries.

This French-style tomato sauce differs from its Italian counterparts in that it’s thickened with roux and enriched with veal stock. Kate Berry

This enriched tomato sauce is the French interpretation of the base most often appearing in the company of pasta. The key difference from most Italian versions is a starter roux of salt pork, butter, and flour. Never olive oil. One of its best-known daughters is the sunny sauce Provençal, made fragrant with the addition of capers, olives and herbes de Provence.

Rich sauce Espagnole is the base for a plethora of traditional French brown sauces. Kate Berry

This rich brown sauce is characterized by strong meat stock, thickened with a dark roux. When reduced further, Espagnole becomes the liquid gold known as demi-glace. Rarely used alone, this mother sauce is essential to preparing daughters such as peppery Sauce Poivrade and wine-splashed Sauce Bourguignonne, both excellent with big, beefy dishes.

While not one of Escoffier’s 5 original “Mother Sauces,” mayo is often given equal billing for its importance to classic French cuisine. Kate Berry

Mayonnaise was not one of Auguste Escoffier’s original mother sauces, but the chilled, eggy dressing is as foundational to French cuisine as its five sisters, and so many believe it deserves equal status. We tend to agree—especially when used to make daughter sauces like Tartar Sauce, Rouille, or Remoulade.