Israeli cuisine is rich with the myriad aromas and flavors that reflect the cultures co-existing in this part of the world. Many food traditions from around the Middle East are incorporated at the Israeli table, and a strong Mediterranean influence is at the forefront. Vegetables often take center stage and most meals start with a selection of salads known as salatim. Israel's climate produces a bounty of produce, so a larder filled with seasonal fruits and vegetables is essential. With a handful of pantry items, you'll be able to turn your farmers market haul into an Israeli feast. 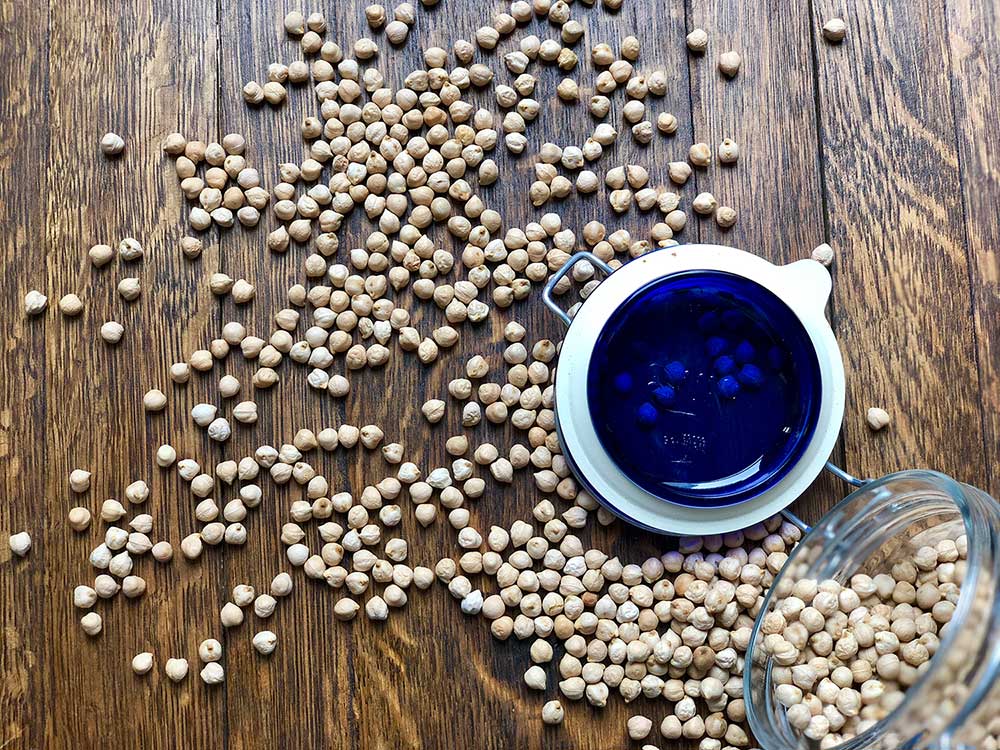 Chickpeas (or garbanzos) are used extensively in Israel; they are readily available fresh, dried, and canned. Israeli recipes use chickpeas in falafel, soups, stews, salads, and other hearty side dishes; they are a necessary staple for the Israeli pantry and a versatile ingredient to keep on hand. The chickpea's most ubiquitous form, hummus, is having a moment right now; fortunately, making it at home is simple and allows you to customize the texture, flavor, and toppings.

In his cookbook Jerusalem, Yotam Ottolenghi suggests soaking dried chickpeas overnight then boiling them with baking soda to remove the outer skins before processing, leading to a truly traditional and silky-smooth hummus. 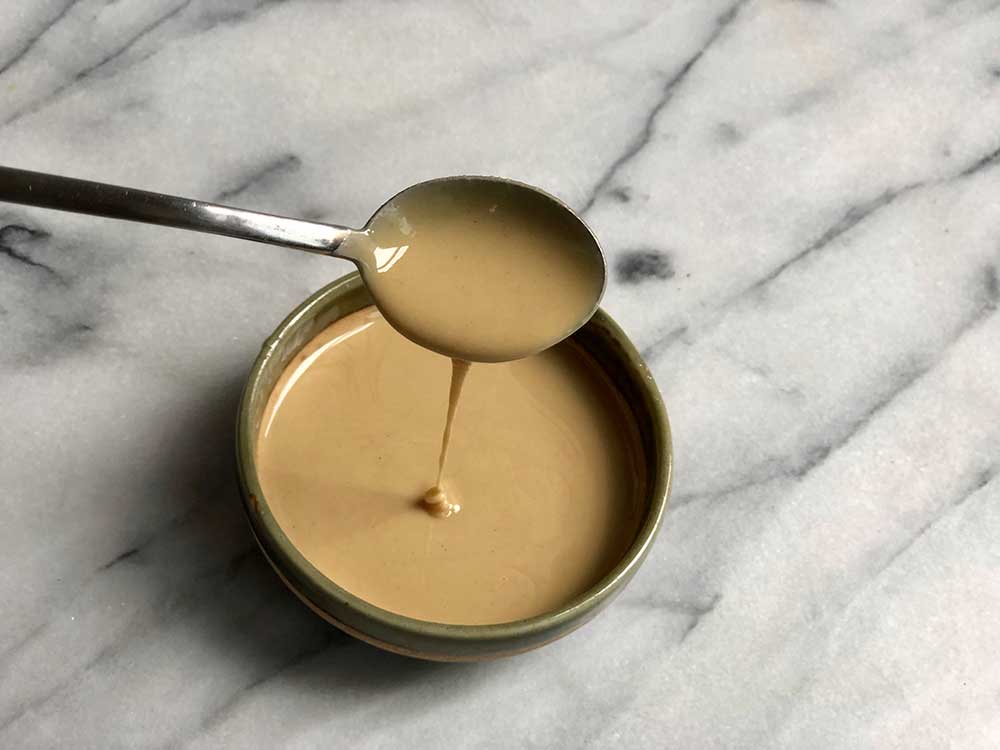 Tahini is a paste made from sesame seeds and has long been a staple in the Israeli kitchen. In his cookbook, Zahav, Philadelphia chef Michael Solomonev says that Israelis love tahini "unconditionally and a little bit irrationally." In addition to drizzling it over vegetables and swirling it into dips, such as these ones with carrots and beets, this versatile ingredient is making its way into a variety of non-traditional applications, such as cocktails, pastries, and potato salad—we've even seen it combined with white chocolate in an irreverent riff on baba ghanouj!

The best sesame is said to come from Humera in Ethiopia, and many small batch tahini producers source seeds from there. Seek out the best, most freshly-milled tahini you can find.

Labneh, “a tangy accompaniment on the Israeli table”

Labneh is an ultra-strained, thick, and spreadable cultured dairy product; it is even thicker than Greek style yogurts and closer in consistency to unaged, French-style goat cheeses. Known in Arabic as labna, it is popular throughout the Middle East and South Asia.

Labneh can be made easily at home by lining a sieve with a few layers of cheesecloth, setting it over a bowl, and placing whole milk yogurt inside to drain overnight in the refrigerator. Traditionally, it can be topped with fruit and honey, mixed with minced vegetables or fresh herbs, or drizzled with fragrant olive oil and eaten with pita. Try it with za'atar in place of herbed cream cheese or as a creamy topping for sweet or savory dishes. 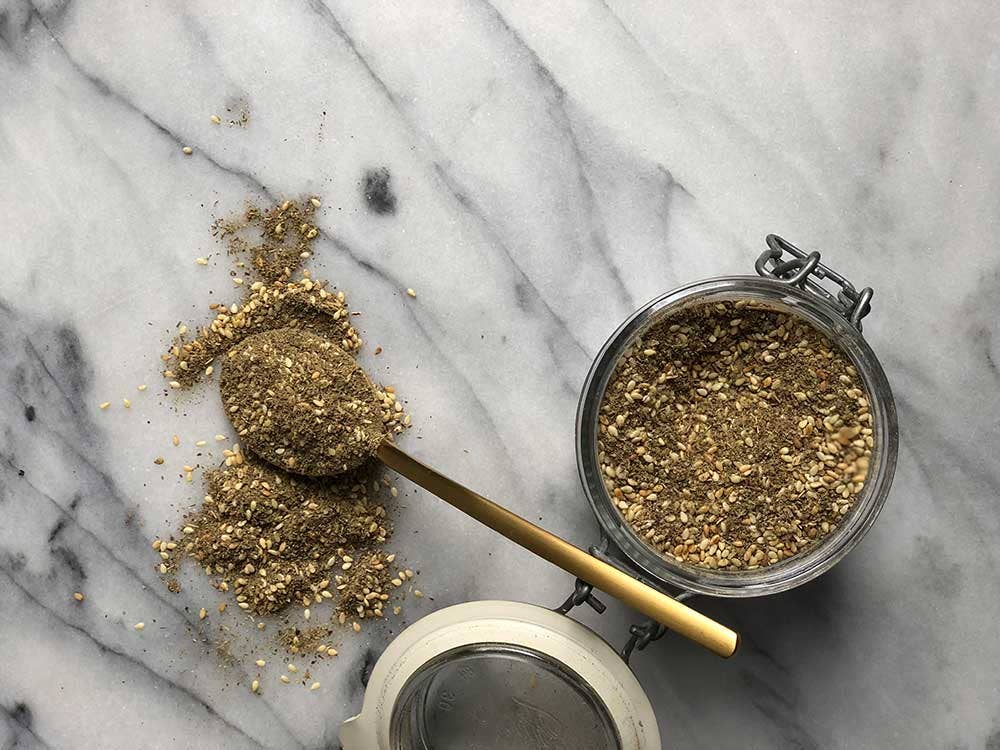 Za'atar refers to both an aromatic of wild herb similar to marjoram as well as a spice blend popular throughout Israel and the Middle East. Ingredients typically include wild thyme, oregano, hyssop, sesame, sumac, and salt. There are references to za'atar in the Hebrew Bible, as well as names for it in Latin (Satureia) and Arabic (za'atar or sa'tar). There are also dozens of varieties available; find one you like and use it to add a savory flair to dips, breads, vegetables, salads, and meat dishes. 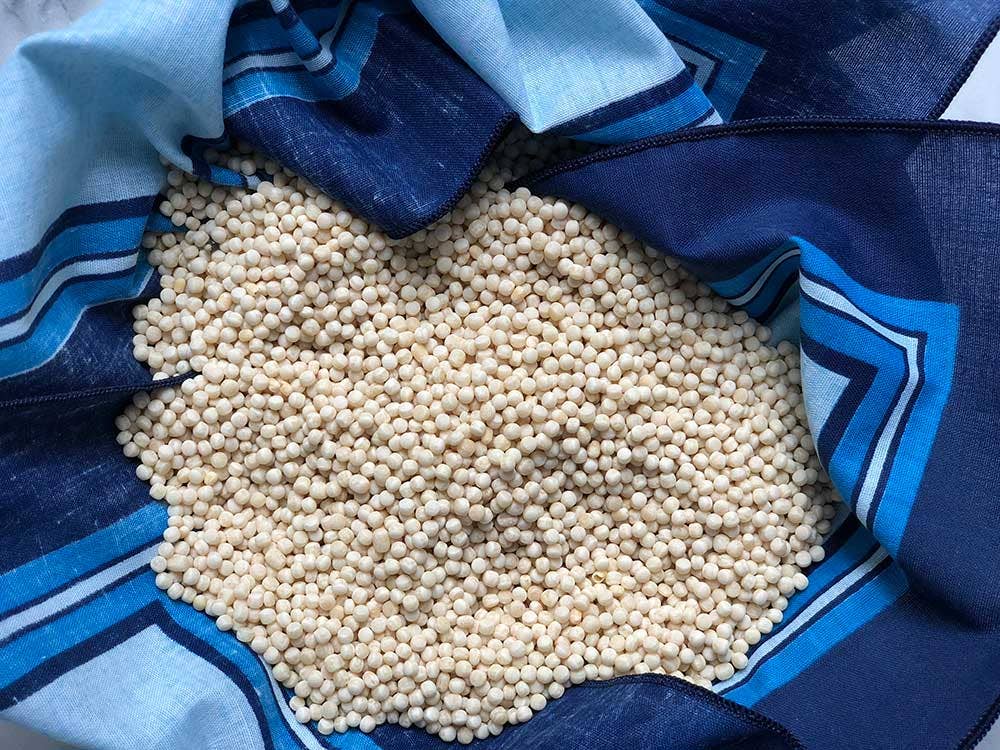 Known as p'titim in Hebrew, this traditional, kid-friendly food is a toasted pasta made from wheat flour and shaped like rice grains or little balls. P'titim originated during the food rationing era of the 1950's in Israel and was known as "Ben Gurion's rice" after the Prime Minister at the time. Try it as a simple side dish or stir it into your favorite soups, salads, or stews. 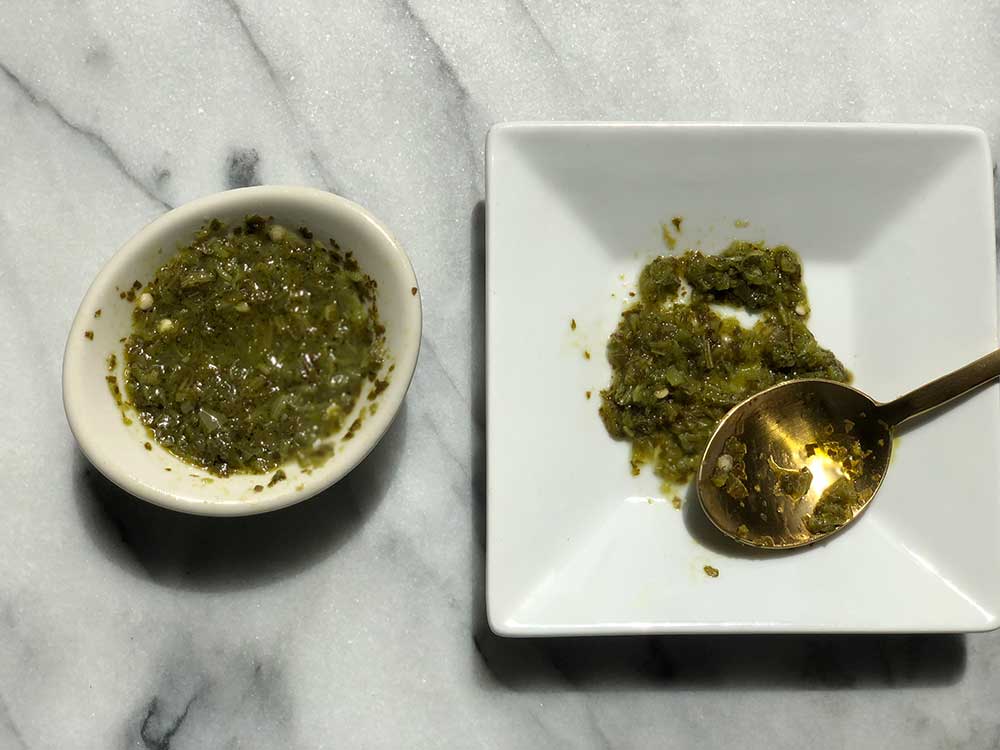 Zhoug is a spicy herbal condiment which most likely originated in Yemen. Similar to salsa verde, it is made by blending fresh green chiles, garlic, and salt with parsley, cilantro, or basil to make a smooth and fiery paste. Israelis use zhoug to enhance savory dishes like eggs and falafel. Zhoug is most vibrant when made fresh, and you can often find it in the prepared or refrigerated section of your local specialty food store. You can make your own and customize the heat level to your taste, or try a store-bought version like this fragrant, herbal one from Belazu, which includes parsley, cardamom, coriander, and cloves. 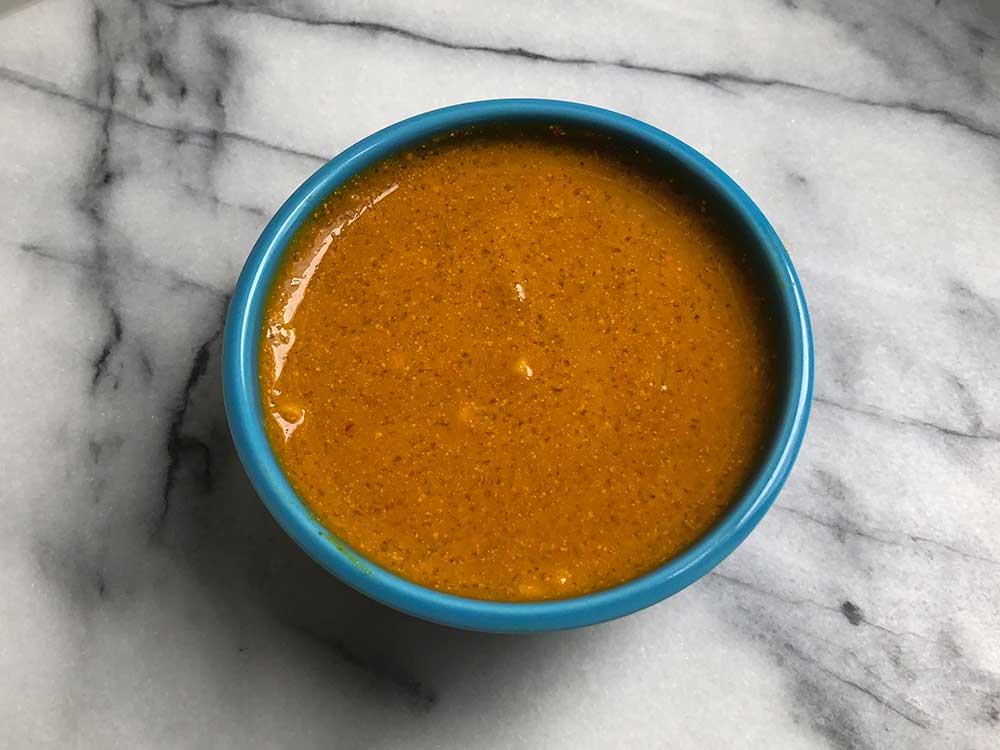 Amba is a tangy pickled mango condiment that made its way to Israel with Jews migrating from Iraq. Unlike its more coarsely-chopped Indian counterpart, Middle Eastern amba is a smooth, pureed sauce used to brighten grilled or fried meat and vegetable dishes such as kebabs, falafel, and sandwiches. 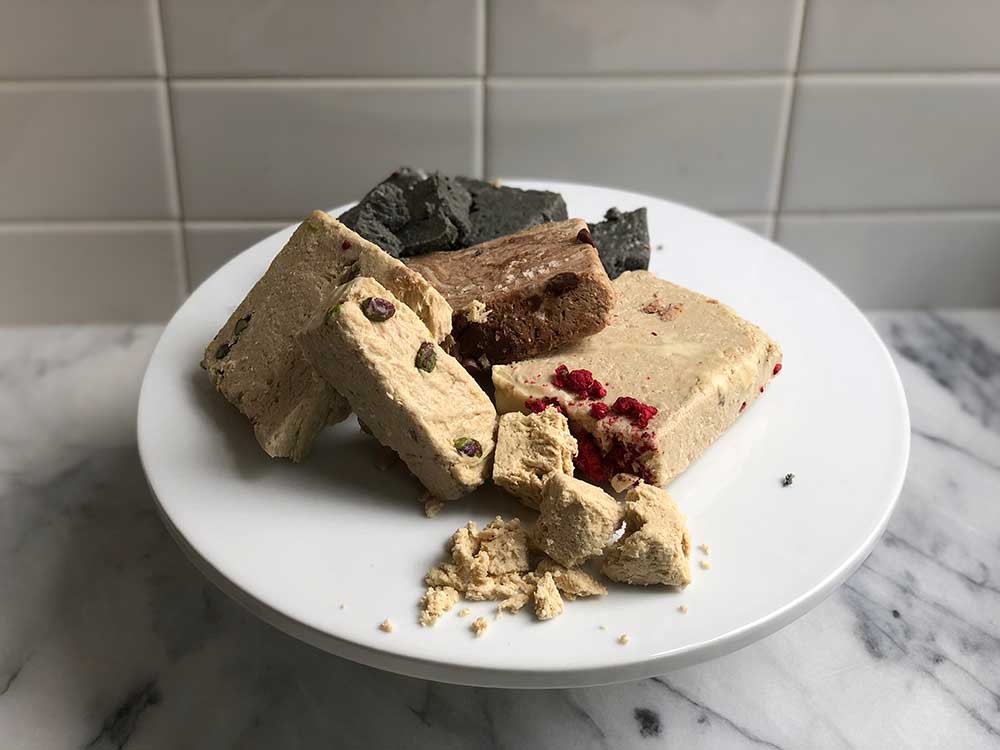 Halva is made by combining heated sesame paste with boiling water, sugar and other flavorings, resulting in a sesame candy with a love-it-or-hate-it texture somewhere between tahini, fudge, and the inside of a Butterfinger. Melt it into simple syrup to add nutty richness to cocktails and iced coffee, toss it into streusel for topping pies or stuffing baked apples, or crumble it and swirl into your favorite brownie batter for a twist on tradition. Seed + Mill is a women-owned business based in New York City, and it happens to be one of our favorite brands. Their hand-stirred halva is available in both classic and original flavors, including marble, pistachio, rose, white chocolate-raspberry, cardamom, and dark chocolate-sea salt. 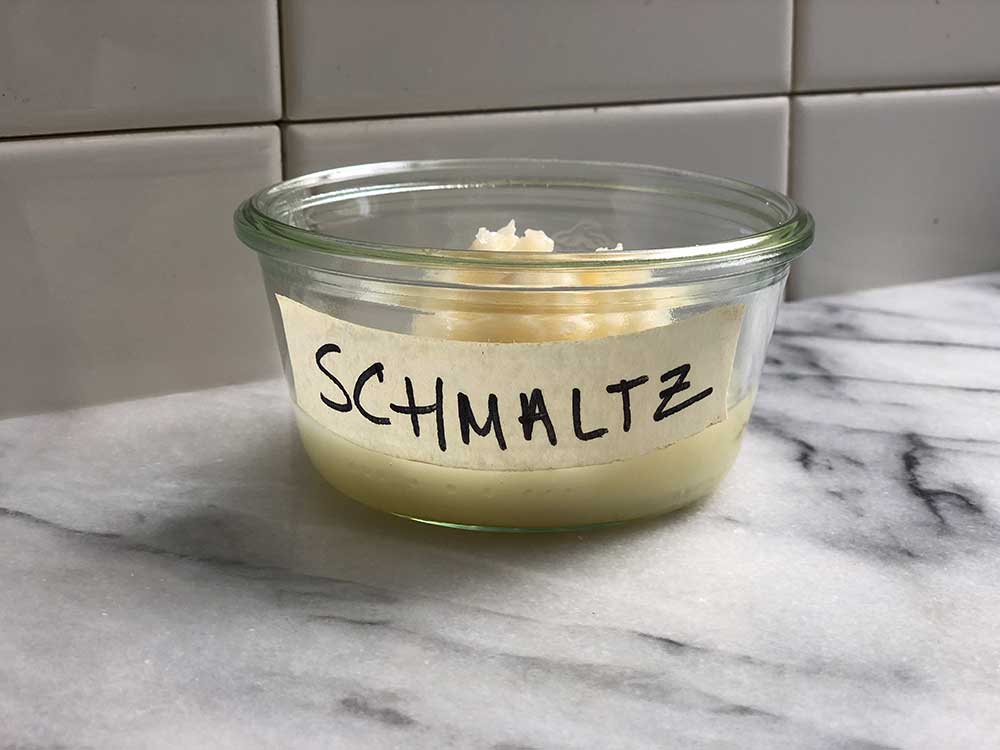 Schmaltz is the yiddish word for rendered chicken fat. It is an umami bomb for frying and can even be eaten as a flavorful spread sprinkled with salt. For a real treat, add a few crispy bits of chicken skin—the byproduct of the rendering process—known as gribenes. Schmaltz is also used in traditional matzoh ball recipes. Buy it from a kosher butcher, online, or make your own. 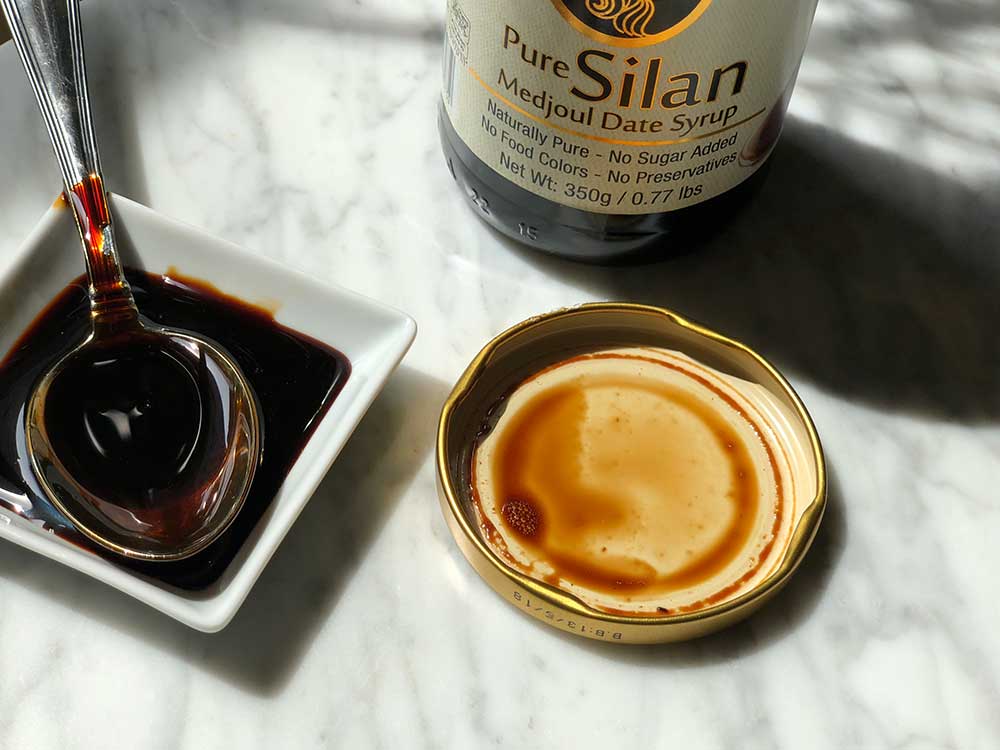 This thick, rich syrup is made by boiling down and straining fresh dates. Israelis use it to add sweetness and depth of flavor to both sweet and savory dishes. Drizzle it over roasted vegetables, add a spoonful to braised lamb, or use it in place of maple syrup or honey in desserts. It is particularly delicious served over vanilla ice cream and is also a nice counterpoint for tangy yogurt. For a twist on the classic PB&J, but with deeper flavor than jelly or jam, try a spoonful of silan drizzled over Michael Solomonov's Israeli open faced version.