Our Best Selection of Turkey Recipes 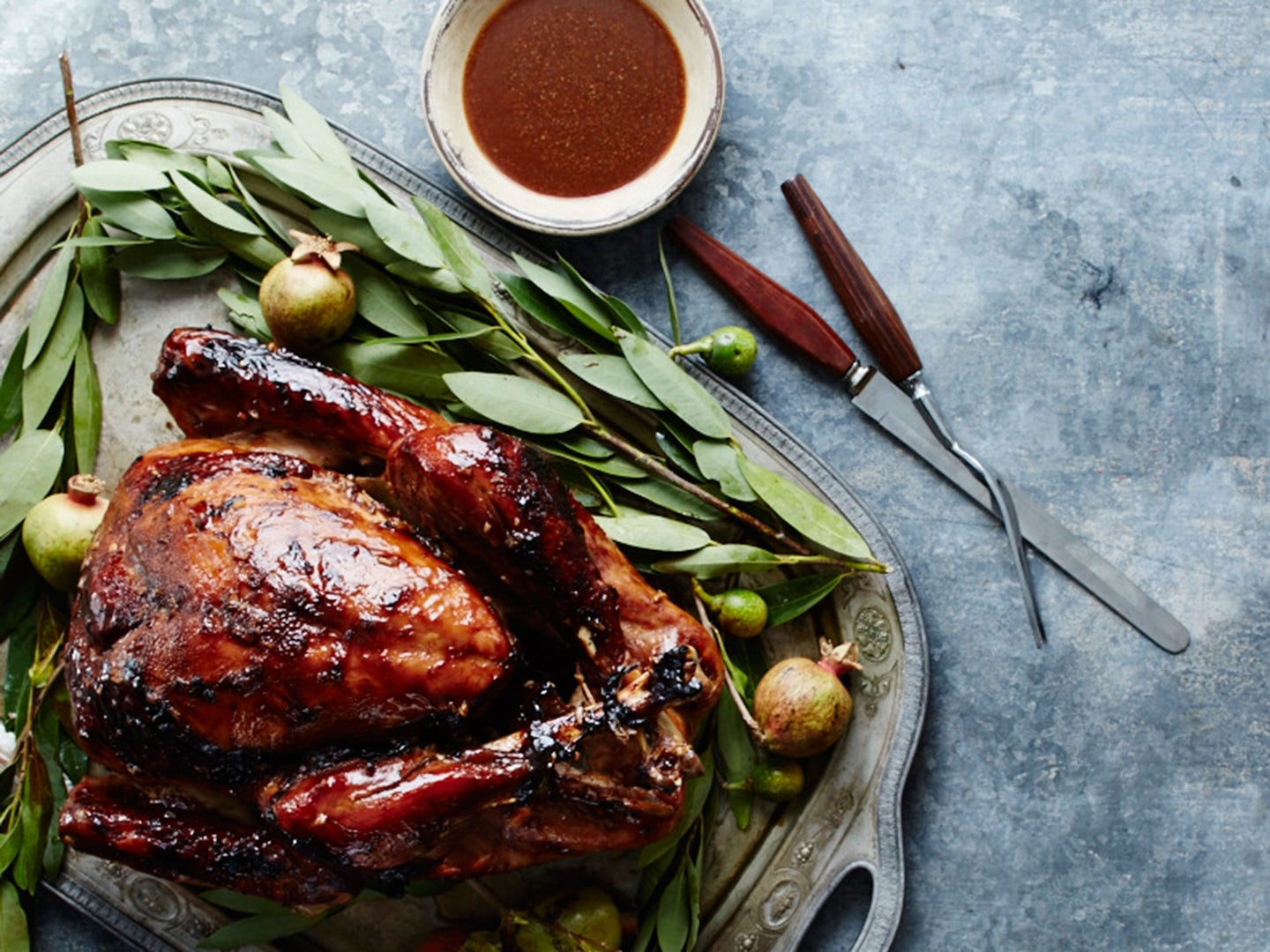 Brining turkeys has become de rigueur in many American households—this recipe shows you how it’s done.

At California’s Bouchon Bistro, turkey is divided into pieces for cooking to maximize its flavor and texture. The drumsticks and breast soak in a tenderizing brine—honey, lemon, herbs, garlic, and lots of salt—before roasting, while thighs are deboned and stuffed with an herbed turkey mousse for roulades.

Massachusetts-based home cook Eric Silvers, a senior astrophysicist at the Harvard-Smithsonian Center for Astrophysics, employs an innovative method for cooking his family’s Thanksgiving turkey each year: The bird is set atop a rack inside a disposable aluminum pan, which is nestled directly into the coals of a grill, and charred at a very high temperature. The result is a crisp-skinned, juicy, smoke-kissed turkey that’s finished in just a fraction of the time it would take to roast it.

Celery root brings an earthy dimension to the stuffing for this crisp-skinned bird, which is dressed in a white wine, giblet, and mushroom gravy.

New Mexico and arbol chiles create a sauce similar to a mole that coats the turkey, while adding spice and depth.

Roasting turkey wings, legs, and breasts over root vegetables, butternut squash, and herbs not only lends the meat a sweet and vegetal flavor but also allows you to treat each piece like a mini roast that can be taken out of the oven as soon as it’s cooked to the correct temperature.

Inspired by the flavors of Peking duck, this turkey is infused with a Sichuan peppercorns, fennel seeds, and fresh ginger brine, then lightly smoked over oak.

Deconstructed turkey braised in a refreshing green mole provides a light and quick alternative to the standard Thanksgiving bird.

Rubbing the turkey with olive oil and fresh herbs yields a moist, flavorful bird with crisp skin. An apple cider gravy and a dressing of hominy, sausage, and oysters add richness to the festive Thanksgiving centerpiece.

Achiote paste gives the rub for this recipe a deep red hue, making for a visually striking roast holiday bird.

Turkey soaks up aromatic flavors like a sponge, and this riff on the Alsatian dish choucroute garnie is a case in point: as the bird roasts under a cloak of bacon and braises in sauerkraut, wine, apples, and a bundle of spices, it takes on the piney fragrance of juniper berries, the fruity flavor of the riesling wine, and some of the smokiness and savor of the pork. Serve this dish with the traditional choucroute accompaniments: sausages, boiled potatoes, and tangy mustard.

LouElla Hill, a Memphis, Tennessee, cook who was famous for her Thanksgiving feasts, liked to roast her turkeys in ordinary brown paper grocery bags to keep them moist. Today’s recycled paper might contain toxins that can leach into food, so we recommend using roasting bags specifically designed for cooking instead.

It may be called the great American bird, but turkey was first domesticated in Mexico, where, as James Beard once wrote, “it was to that country what beef is to the United States.” One of our favorite preparations is a celebratory dish from the Mexican state of Puebla: a slow braise of breast meat in a deep, dark mole that’s shot through with three kinds of dried chiles, peanuts, and pumpkin seeds and enriched with chocolate and spices. The spicy, sweet, savory sauce can be sopped up with hot tortillas and rice, or even crusty bread.

Butterflying breast meat and stuffing it is a cook’s trick for ensuring a flavorful, juicy, and evenly cooked holiday roast. This dish, inspired by a recipe from the chef Donald Link of Herbsaint and Cochon restaurants in New Orleans, has a Cajun accent: the stuffing of boudin (a spicy pork and rice sausage) gives the turkey a piquant appeal. The best part? Rolling the breast and slicing it enables everyone at the table to have a piece with plenty of sumptuous stuffing and crackly skin.

This sage-infused roast turkey is stuffed with a bacon-enriched dressing brimming with wild rice, hazelnuts, and oysters.

Black pepper is a major ingredient in this dish, so be sure to use fresh-cracked as opposed to pre-cracked pepper.

We’ve tried many roasting methods over the years, but the one Susana Trilling uses to make the chile-rubbed turkey she serves at her Thanksgiving feast in Oaxaca, Mexico, really stands out. An hour into roasting, Trilling flips the turkey so that the breast is on the bottom. The result is juicy white meat and meltingly tender legs and thighs.

Leah Chase, the longtime chef at Dooky Chase, prepares a roasted turkey with astonishingly tender and juicy breast meat. The secret, we learned, is to seal the bird in an oversize packet of aluminum foil, which locks in the moisture. To brown the bird, she unwraps it and roasts it at a high temperature for the last 30 minutes.

Surprisingly little known today, Clementine Paddleford was an influential newspaper food editor and early champion of American cooking. This savory stuffing recipe and the turkey roasting method are hers.

Long before the arrival of the Spanish, wild turkeys populated Mexico, and the Aztecs domesticated them. Picadillo is also used to fill tacos, tamales, and quesadillas and to stuff chiles.

Capon with sage stuffing makes a nice change from holiday turkey. This type of bird is readily available during the winter holiday months, but usually must be special-ordered.

This recipe yields a Thanksgiving turkey that is moist, delicious, and a perfect foil for inventive accompaniments, such as our Madeira-Truffle Butter, Multicultural Stuffing, and Rich Gravy recipes. Just garnish the bird with a few sprigs of fresh herbs before servings, and you’ve got the makings of a lovely holiday dinner.